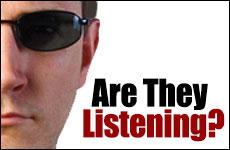 Has anyone who’s against the NSA’s policy of phone and email tapping come up with a better way to find terrorists?

Jewlarious Satire: So don’t get all bent out of shape! It’s a humor piece!

To be honest, I don’t see the big deal about the recent revelation that the NSA is tapping our phones and emails. I don’t know about you guys, but I watch enough movies that I already assumed this was true. I don’t know who thought the government WASN’T monitoring us. I was always operating under the assumption that the CIA was sitting outside my house in a diaper truck with two holes poked in the side for them to peer through.

Who thought the government WASN’T monitoring us!?

But my assumption, of course, is that the NSA is doing responsible, federally-approved things with this information. So I’m not worried about the government having it. Though I am worried about the wrong people hacking the system and getting it. Because I know that in that case, a hero is going to have to step up and do something about that, and I definitely don’t want to be that guy.

But apparently, everyone else only recently found out about this, thanks to a leak in their department and an article that ran in England, that they monitored. And now the NSA is pitching a fit, because we’re not allowed to know what they’re doing all of a sudden.

Yeah, I get it. There’s an obvious distinction, in that some of us are terrorists. I mean, I personally am not a terrorist. (I say this for the sake of any government officials monitoring this article.) Although my parents, who were the last people in this country to get a cell phone (Yes, singular. Maybe someday they’ll get a second.), once went into a store – Century 21 – with walkie-talkies, and my father got thrown out for looking Middle-Eastern and talking into a walkie-talkie. The store didn’t want any terrorists plotting about what coupons they were going to use.

But a lot of people are up in arms at this revelation, because they say it’s an invasion of privacy. After all, the Bill of Rights clearly states that you can’t monitor phone calls and emails that might otherwise lead to people getting killed. Or, if it doesn’t actually say that, this is clearly what the founding fathers had in mind.

Personally, I don’t think it’s as big an invasion of privacy as they’re making it out to be. It’s like a Tweet that I recently read (Monitored?):

There are so many of us, and so much information that keeps coming in, that there’s no way they’re listening in on everyone. At most, I’d say, they’re listening to two seconds of your life – just enough to know that your phone conversations are less about terrorism and more about whether you have enough kale in the house, or whether you need to buy more – and then they’re moving on. It’s kind of like when you hear your neighbors arguing, but you don’t really care. You’re definitely not going to step in and take sides. (“No, she’s right. She asked you to move your socks yesterday.”) You have to have a certain sense of entitlement to believe that your life is so important that the government is going to stop hunting terrorists to sit around and find out what happened in the end with your socks.

Let’s put it this way: If the NSA was listening to every conversation, then why didn’t they hear the reporter in England interviewing this leak in their own organization? Did it all just go down on a park bench with trench coats?

A lot of people are offended by this revelation, though, because they think their own government thinks they’re terrorists. And I get that. I teach high school on the side, and sometimes, when I give out tests, I put a statement for students to sign at the bottom of the paper, saying that they didn’t cheat. And if you think my students are surprised that there are tests, you should see them when they find out they have to sign the bottom. Especially when they don’t notice it until the end. They yell at me for “accusing” them, like I specifically stuck that into their personal test paper. But I do it anyway, because I’ve discovered that a lot of kids will cheat, but they won’t lie. And yes, technically, cheating and lying are the same thing, but I can’t tell them that, because if they were going to listen to a single word that came out of my mouth, ever, then they wouldn’t need to cheat in the first place.

But if they’re not cheating, what’s the big deal about signing it?

And the answer is, “Well, I don’t want EVERYONE seeing everything. But if the doctor tells you to get undressed, you get undressed. You’re not happy about it, but he’s a medical professional, and he’s not going home afterward to laugh about how your arm flaps are so big that you can go hang gliding. He needs to see if anything is wrong. And similarly, the terrorism professionals want to catch the terrorists with their pants down.

But on the other hand, there are still reasons to be worried. For one, sometimes we say things that are totally innocent, but can be taken out of context. The fact that they’re not listening to every single conversation means that this is very likely to happen. What if they tap in for the tail end of the planning of a surprise party? And we just know from experience that the two seconds of our life that they monitor will be the worst possible two seconds, and then we’ll be on their list forever. Do we have to, in middle of every phone conversation, pause periodically to explain the background of what was just said, just in case, as if we’re talking to a particularly slow imaginary friend?

Also, we want to believe they’re like medical professionals, but medical professionals have confidentiality. How professional is this organization that their employees are going around leaking information all over the place? And it’s one thing to be monitored, but you don’t want to KNOW you’re being monitored. Every time you look at any kind of government official, you’d be thinking, “Does he know? Does he know I ordered 16 pizzas last night? Which conversation did he awkwardly walk in in middle of that I wasn’t aware of so I could explain it to him?”

The other reason I don’t feel this whole NSA thing is that much of an issue is that we Jews already believe that G-d hears and sees everything from a big diaper truck in the sky, and he writes everything down in a book, or, these days, probably puts it on his tablet (I don’t mean the two tablets). But on the other hand, God is less likely to take things out of context. He knows what’s going on in our heads, because he records that too. So I say, maybe the NSA should have some kind of device that tells them what’s going on in our heads.

Okay, maybe not. But to be safe, I’m already assuming they do, tin-foil wise.

But here’s the thing: No one who’s against this policy is coming up with a better suggestion as to how to find terrorists. It’s kind of like helmets or seatbelts. They’re very inconvenient. Every time I get into a car I have to strap the entire thing to my back, and G-d help me if I try to get out of the car but forget to open my seatbelt first. And every time I get on a bike I have to look like a weird alien with a bald neon head with holes and a chin strap. A lot of the things we do for safety are inconvenient, and frankly, embarrassing. But do you have a better idea?

Yeah, stop using cell phones. And then get kicked out of Century 21.

But maybe some people do have a better idea. I don’t know. The government probably knows, though, because they eavesdrop on everyone. So I assume that there hasn’t been a better idea, because no one’s leaked it yet.

Shoeless in Albuquerque
Blessing on Chewing Gum
Was Rahab a Prostitute?
Extras In Our Own Epic
Comments
MOST POPULAR IN Jewlarious
Our privacy policy