Anti-Semitism at University of Toronto 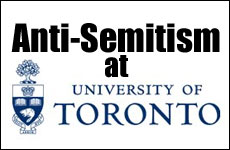 Jew-counting, racism and intimidation in U of T's Social Work program.

Picture the following: A discussion in a post-graduate university class on the topic of Jews turns ugly. The professor is uncritical when one student says he doesn’t want to be around Jews. Another student complains about “rich Jews,” implying their excessive power. In a subsequent class, the same professor, as if to validate those points, says half her department faculty are Jews and with her approbation, students conduct a ‘Jew count’.

While this sounds like an episode in Germany leading up to the anti-Jewish Nuremberg Laws, it occurred more recently and much closer to home, at the University of Toronto’s Faculty of Social Work. Now, more details are emerging under the exceptional circumstance of two U of T professors publicly criticizing a colleague for facilitating classroom anti-Semitism and the university administration’s inadequate response.

The controversy began when some visible minority students in a Social Work Master’s program at the University of Toronto expressed discomfort about being around “rich Jews,” in Professor Rupaleem Bhuyan’s class, regarding a proposed outing in 2009 to the Baycrest Centre, an internationally renowned Jewish geriatric and research facility. They were undoubtedly confident of a sympathetic ear from her. The previous year, Bhuyan denounced Israel as a satellite of the United States, unworthy of distinction as a separate country.

The few Jewish students in Bhuyan’s Master's Program class were intimidated into silence for much of the discussion by a classroom culture slanted against them. Finally, one young woman spoke up, protesting her grandparents had come to Canada with virtually nothing and she was proud her family could now afford the fees for them to reside at Baycrest.

That must have rung an alarm bell for Professor Bhuyan, because startlingly, she then admonished her students not to divulge what transpired in class to outsiders.

But her classroom was not Las Vegas and what happened there did not stay there. Some outraged Jewish students approached Professor Paula David, who in turn consulted senior professors Ernie Lightman and Adrienne Chambon.

“Students are in a vulnerable position and dread officially attaching their name to complaints against a professor in a program like Social Work,” said Lightman. “Aside from determining grades, they fear one bad word from a professor to a social agency can eliminate their employment prospects.”

In the face of such circumstances, Lightman assumed the voice of the Jewish students who endured the vitriol in Bhuyan’s class. He, with Chambon spoke to Faye Mishna, the Dean of Social Work about the incidents. A letter Lightman wrote to U of T President David Naylor about the matter also became public.

By way of response, Mishna, without specific reference to the incident or Bhuyan, sent out a pair of letters to the Social Work department generically condemning anti-Semitism.

Lightman believes the university’s response was absurd. “The department’s approach seemed to imply a widespread problem with anti-Semitism – which there wasn’t – and that everyone is potentially a racist when one professor promoted anti-Semitism and was never held publicly accountable.”

The Canadian Jewish Congress declined to participate in resulting seminars on anti-Semitism held for the Social Work Department. According to the CJC’s Bernie Farber, “We were not satisfied in the end with the entire process.”

Chambon, a Jewish professor who is Director of PhD programs in the Social Work department, was particularly pained by these events. Originally from France, she relates that “I am from Europe and of a generation with bad memories of the sinister results of Jew counts.” After hearing about the incident, Chambon arranged to meet with Bhuyan.

We have a responsibility to students to ensure faculty do not abuse the power inherent in their positions.

“I was flabbergasted” Chambon disclosed. “She told me ‘racialized’ students come from underprivileged backgrounds and were justified in not wanting to be around old Jews because they are rich and would make them uneasy. I couldn’t believe my ears. I took some paper and wrote down what she said in front of her. Bhuyan then said the donor plaques at the university were all from rich Jews, which she felt proved her point. Aside from being factually wrong, it reflects an attitude that polarizes groups and reinforces stereotypes that do not belong in the teaching of Social Work.”

Professor Bhuyan did not reply to a request to comment for this article and the University refused to add to Social Work Department Dean Mishna’s response that, “the Faculty took all steps to address the matter appropriately at the time of the incident and thereafter.”

Nothing could be more false in the opinion of Lightman, Chambon and others. While patiently waiting for the wheels of justice to grind slowly, they instead saw them go off the rails.

Bhuyan, an untenured Assistant Professor, who never offered a public apology for her behavior, was rewarded by the University with a contract renewal .

That development has frustrated a number of professors in a dysfunctional Social Work Department that remains divided in opposing camps. Lightman insists this matter must be exposed and wrote a recent article about it for The Journal for the Study of Anti-Semitism.

Lightman asserts, “It’s ironic that a department purporting to teach anti-racism is incapable of dealing with racism in its own house. We have a responsibility to students to ensure faculty do not abuse the power inherent in their positions, and to the community-at-large to ensure all the Social Workers it graduates reflect and promote the values of the field. That hasn’t happened here."

Ontario's Minister for Colleges and Universities is John Miloy. The Progressive Conservative Critic for that portfolio is Jim Wilson. Why not let them know what you think?

This article originally appeared on the blog: Eye on a Crazy Planet

The Man on the Street
Live Abortion Panel
Morality and Abortion: Three Views
There Are No Limits
Comments