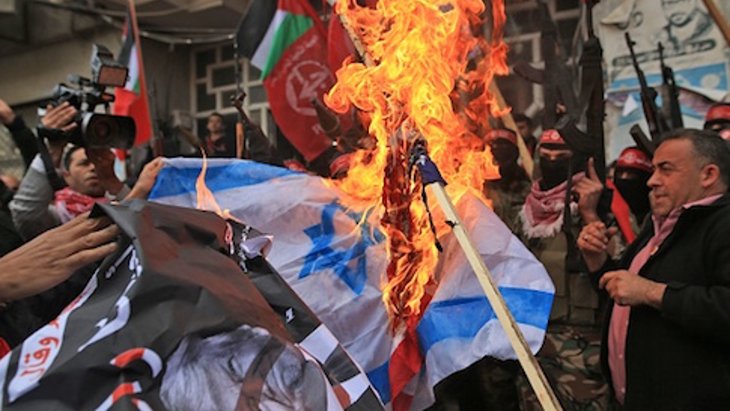 It has jumped by 70 percent in the past year.

Anti-Semitic harassment on college campuses aimed at pro-Israel students jumped by 70 percent in the past year, the highest levels ever seen, according to a new study showing that the endorsement of anti-Israel causes by students and professors has created an unsafe environment for Jewish students.

Harassment of students who expressed pro-Israel ideologies jumped 70 percent from 2017 to 2018, according to a new report by the AMCHA Initiative, a campus organization that monitors anti-Semitism on more than 400 college campuses and that has recorded some 2,500 anti-Semitic incidents across the U.S. since 2015.

AMCHA found in its latest report that while examples of classical anti-Semitism decreased overall, there has been a major spike in students being targeted for hate speech and violence due to their open support for the state of Israel.

The findings jibe with anecdotal evidence seen across the country of Jewish and pro-Israel students experiencing violence and harassment from those associated with the anti-Semitic Boycott, Divestment, and Sanctions movement, or BDS, which aims to wage economic warfare on Israel. The BDS movement has put major resources into its campus activities and it appears to be bearing fruit across the United States.

Hostility toward Israel's supporters on campus "reached near-historic levels" during the past year, according to the report.

The findings are a sign that hatred toward Jews and pro-Israel students is primarily coming from activists aligned with the BDS movement, rather than classic anti-Semitic motivators such as white supremacist ideologies.

"While acts of classical antisemitism in the U.S. reached near-historic levels in 2018 and included the deadliest attack against Jews in American history, the nation's colleges and universities revealed a somewhat different but nonetheless troubling story," according to AMCHA's study. "On campuses across the country, harassment motivated by classical antisemitism actually decreased, and significantly so. At the same time, however, the number of Israel-related acts of harassment increased significantly."

Anti-Semitic expression and acts on campus continue to rise to historic levels, according to the study.

"Expression demonizing and delegitimizing Israel," for example, "increased by 32%, with expression accusing Israel or Zionism of ‘white supremacy' more than doubling," according to the report.

"Expression promoting or condoning terrorism against Israel increased by 67%" during the past year.

Words and acts "promoting or condoning the elimination of Israel more than doubled," according to the study. It also found a "three-fold increase from 2017 to 2018 of incidents involving individuals or groups openly acknowledging their opposition to Zionism."

Moreover, "expression by BDS supporters acknowledging that the goal of BDS is to bring about or facilitate the elimination of Israel" increased from one incident in 2017 to 32 in 2018.

Much of this rise has been attributed to the willingness of college faculty members to lend their voices to the BDS and anti-Israel movement.

This includes academic boycott of Israel, which was linked to 86 percent of the anti-Semitic harassment, and a dramatic increase in faculty members promoting BDS and anti-Israel activism.

"Academic BDS is primarily a faculty-driven boycott, whose rise in prominence and popularity on campuses across the country is linked to the increased participation of faculty in the anti-Zionist rhetoric and behavior associated with it," according to AMCHA.

"Events sponsored by academic departments that contained the demonization or delegitimization of Israel increased by 85%," the study found.

"Taken together, these results suggest that the significant increase in acts of Israel-related harassment seen in 2018 may have been a direct consequence of the increased promotion and implementation of academic BDS," according to the researchers.

Tammi Rossman-Benjamin, AMCHA's director and a member of the research team, said that it is becoming clear that college faculty members are now directly contributing to the rise of anti-Semitism on campus.

"Academic BDS is more dangerous than people realize," Rossman-Benjamin said in a statement. "Not only does implementation curtail students' educational rights and opportunities, its promotion on campus, particularly by faculty who give it academic legitimacy, is inciting an alarming increase in harassment against Israel's presumed supporters, first and foremost Jewish students. Administrators must take the necessary steps now to stop these unacceptable acts of intolerance."

This article originally appeared in the Washington Free Beacon.