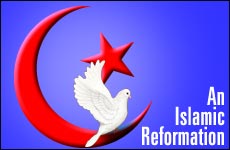 I realized that I had grown up behind a wall of fear, media lies and deception that separated us Muslims from the rest of humanity.

Born and raised a Muslim, I grew up in Gaza and Cairo at a time when Gamal Abdel Nasser committed Egypt to unifying the Arab world and destroying Israel.

Egypt mobilized the Arabs of Gaza and encouraged the fedayeen to make cross-border attacks into Israel.

My father, a high-ranking Egyptian officer, was killed as a result of one of these operations in Gaza.

After my father's death attention was lavished on our family -- for a few weeks. However, widows of shahids, like my poor mother, were left holding the bag alone in a culture that respects only families headed by men.

In Gaza elementary schools we learned hatred of Jews, vengeance and retaliation. Peace with Israel was never mentioned as an option. I was told not to take candy from strangers since it could be a Jew trying to poison me.

I lived in the Arab world until the age of 30, witnessing three major wars and the ever-growing influence of fundamentalist Islam. Freedom of speech was suppressed.

Citizens developed a degree of comfort in being ruled by dictators. Their statues and pictures were everywhere; songs praised them on every radio station.

I witnessed the oppression of women, honor killings of girls, female genital mutilation, and polygamy, with its devastating effects on family dynamics.

I was happy, finally, to leave all this behind and move to America in 1978. Suddenly I enjoyed freedom of religion and equality between classes and races.

My first job was given to me by a Jewish businessman. I witnessed Christians and Jews practicing their faith peacefully. Among my Jewish and Christian friends I heard the words love, compassion, forgiveness and shalom.

Sincerely they asked: What can we do to have peace with Arabs?

I felt betrayed by my culture of origin for advocating violence or talking about peace only in the presence of Westerners.

I realized that I had grown up behind a wall of fear, media lies and deception that separated us from the rest of humanity. But I did not yet dare verbalize these thoughts.

When I visited Egypt in 2001 the situation there had become even more difficult. Pollution, hazardous materials and garbage were to be found along the banks of the Nile. I witnessed extreme poverty, unemployment, high inflation, widespread corruption and mismanagement.

We returned to the US on September 10, 2001. Next morning, the whole world changed.

The very instant I saw the second plane hit the Twin Towers I knew that jihad had come to America.

I knew -- the very instant I saw the second plane hit the Twin Towers -- that jihad had come to America. To my horror, the country that had given me shelter, protection and hope was under a monstrous attack from my own culture of origin.

I immediately telephoned a number of Muslim friends. Without exception, they made excuses for terrorism, denied the responsibility of Muslim culture, and concluded that 9/11 was an Israeli conspiracy.

These were not radical fundamentalists but moderate, educated and well-traveled Muslims.

I began to reflect on the society in which I had grown up.

Those who do not practice Islam fervently enough become the target of radicals. The result is domestic turmoil, political assassinations, fatwas, and terror.

I remember, as a young woman, visiting a Christian friend in Cairo during Friday prayers. We both heard the attacks on Christians and Jews from the loudspeakers outside the mosque: "May God destroy the infidels and the Jews, the enemies of God. We are not to befriend them or make treaties with them."

My friend looked scared, and I was ashamed. That was when I first realized something was very wrong in the way my religion was taught and practiced.

It is these preachers who are responsible for turning vulnerable young men into terrorists. No government is "Muslim enough" for them. In this dynamic, only tyrannical regimes can survive.

Yet reforming how Islam is taught is not going to be easy, especially because the change must come from within. So far, Muslims do not seem genuinely interested in reformation.

A huge, well-funded PR campaign, in operation since 9/11, is concerned with the image and reputation of Islam. But it does not confront the fundamental need for an Islamic Reformation.

After 9/11, I had to break my silence. A few other Arabs and Muslims also found the strength, commitment and honesty in their hearts to speak out - to say America and Israel were not the enemy.

I have been privileged to meet with many people across America. I have shared tears and embraces with many women and young students.

Americans, simply puzzled by Muslim culture, often ask me: "Why are Muslims not outraged over 9/11? Why are moderate Muslims not speaking out?"

With time I began receiving e-mails from Muslims who agreed with me. They wanted to live in peace with Israel, but were afraid to speak out.

I realized there was a need for a forum to exchange ideas and speak freely, either anonymously or openly. And so I founded the Web site arabsforisrael.com.

Recently a Palestinian woman, now living in the US, who shares my views sent an e-mail, which I posted on the site. Out of habit I protected her by signing it "Anonymous."

It is time for Arabs to set ourselves free from the taboo against self-criticism. A reformation movement within the Muslim world is desperately needed. There is plenty of virtue and goodness in Islam that needs to be pushed to the forefront.

It is the duty of good Muslims to bring out the compassion and tolerance in Islam, not only verbally but also through action.

We need a Middle East culture that reflects the diversity of its people and respects equal rights for all - Jews, Christians and Muslims.

One goal should be to welcome the people of Israel as neighbors and invite them to flourish with us in an atmosphere of coexistence and peace.

I am cautiously optimistic that the good side of human nature will prevail.

It's Not About Occupied Territories

20 Facts about Israel and the Middle East

An Insane, Terrorist, Suicidal Society
The Promise Of The Land
Which Chat Are You On?: Parshas Behar/Lag Ba’Omer
Do You Like Slow-Cooked Food? Thank the Jews
Comments
MOST POPULAR IN Middle East
Our privacy policy