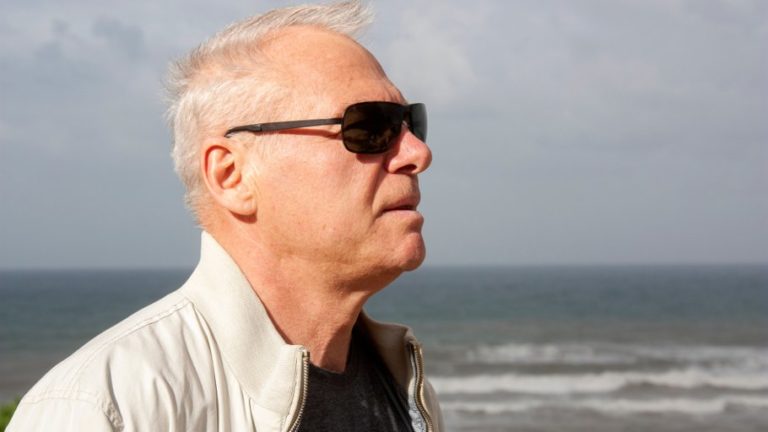 My moving encounter with an old Israeli soldier.

It was a sunny November day in Netanya. My wife, mother and I were there for a short vacation and we decided to visit a neighborhood cafe. It was late in the afternoon and the locals were starting to arrive.

The waitress offered us a table inside, but we declined since loud music was blaring from speakers on the wall and the TV was on. We preferred the relative quiet of an outdoor table. The waitress brought us some drinks, and I was enjoying my cappuccino.

That’s when I noticed him. He was an older gentleman, probably in his upper seventies. He was on the heavy side, had large tinted glasses and wore a baseball cap. He was two tables away from us and had just finished reading the paper. We caught each other’s eyes and nodded politely to one another.

Suddenly I started hearing music. Rats, I thought. We had picked this table to avoid the intrusive music inside the cafe, only to get more music outside. It made it harder to have a good conversation. Where was it coming from? Besides, it sounded rather mournful.

I tried to locate the source of the dirge-like music, then I noticed the old man was playing with his cell phone, and looking over at me. The music was coming from his cell phone. He was listening to some kind of show and had turned it way up. It seemed a little rude and annoying but we did our best to ignore it and continue shmoozing.

Apparently that wasn’t good enough for him. He had decided I had to hear what he was listening to. He got up from his chair, walked over to me, and began speaking to me in Hebrew.

I looked at him in surprise. Why did he come over to me, a perfect stranger? I wasn’t really in the mood for the sad music and I was really having a fine conversation with my family.

But the man was insistent.

He thrust his cellphone onto my table, right in front of me.

I looked at my mom, then at my wife, and shrugged. This must have been really important to the man.

Was that a tear I saw in his eyes?

Nobody else at the cafe seemed to care what was going on. Maybe they were used to him.

On the screen was a man in an IDF uniform singing into a microphone. He had a beautiful voice. Behind him was a choir of IDF soldiers.

“Pay attention to the words!” the old man said.

I realized that the singer was the chief chazzan (cantor) of the IDF, and he was singing the Mi Shebeirach L’Chayalei Tzahal – the prayer for God’s protection of the soldiers of the IDF. It was a prayer that I value deeply but had never heard sung before; usually it is recited in the synagogue, but not in any particular tune. The melody was haunting and beautiful. I was very moved.

I thanked him and told him how much I loved the song. I walked him back to his table and we sat down for a few minutes. Those indeed had been tears in his eyes.

He smiled. “Betach! Of course.”

“What did you do in the army?”

He went on to say that he was a retired lieutenant colonel in the vaunted IDF paratroops and had fought in every major war since the Six Day War, in which he was among the liberators of Jerusalem. He had trained generations of combat soldiers along the way.

The man was a hero who had risked his life countless times for our people.

And here I was, getting annoyed at the intrusion.

He was spending his retirement years in a resort town, deeply connected to his glorious past of defending his country and fighting in its battles. And more, he recognized God’s protection and the need for our prayers to protect Israel’s brave soldiers.

I thanked him profusely for his army service and for sharing the beautiful music with us. He seemed grateful that my family and I appreciated the heartfelt rendition of the special prayer. We shook hands and then my family and I left the cafe.

On my way out, I stole one last glance at the old soldier.

He was already lost in his thoughts. About past battles. About his soldiers in harm’s way. About God’s protection.

To think I nearly missed this opportunity to meet one of the ordinary heroes of Israel.

A version of this article originally appeared in ou.org.

Care Packages to Gaza
Blocked Goals and Anger
Why the Mezuzah is Placed on a Slant
Faith: the Axis Upon Which the Wheel of Science Turns
Comments
MOST POPULAR IN Israel
Our privacy policy