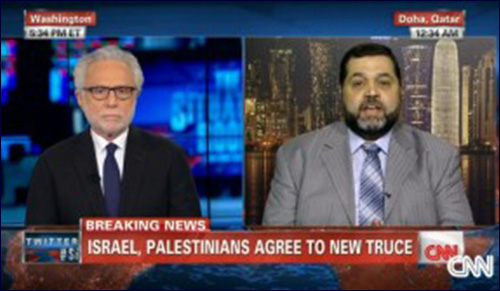 Jews are in denial about anti-Semitism.

You looked distraught in your recent CNN interview with Hamas spokesman Osama Hamdan. You had been “very disturbed” by a video from Al-Quds TV in which Hamdan, in Arabic (translation verified by CNN), stated: “We all remember how the Jews used to slaughter Christians in order to mix their blood with their holy matzot. This is not a figment of the imagination or something taken from a film; it is a fact acknowledged by their own books and historical evidence.”

Incredulous that your interviewee would promulgate such medieval slander, you respectfully asked, “You believe that Jews would kill Christians to mix their blood to bake the holy matzot on Passover? Is that your belief, Mr. Hamdan?”

You let him sidestep the question and rant for a couple minutes about Israeli politicians who, he said, were advocating genocide in Gaza. After he referred to Prime Minister Netanyahu and his government as “the new Nazis of this century,” you finally interrupted him with a plaintive: “I understand that, and I just want you to be specific and answer the question. Maybe I’ll remind you of what you said.” Then you played the clip for all your CNN viewers to see it for themselves, and you repeated your question: “So do you believe that Jews used to slaughter Christians to use their blood to bake matzahs?”

Wolf, what is more incredible – that Hamdan, an intelligent man in the 21st century, could believe the old medieval blood libel, or that you, after witnessing him say it, could believe – could desperately want to believe – that he didn’t really mean it?

After Hamdan ranted on for almost another two minutes, you looked so dismayed when you admitted: ““I was hoping to get a flat denial from you that you would utter such ridiculous words, that Jews would kill Christians to use their blood to make matzah.”

Wolf, how could he deny the words that millions of viewers had seen him utter? And would you, astute as you are, have been satisfied if he had denied it? Would you have slept soundly that night, satisfied that we Jews are not really hated by the people who demonize us?

Although I’m sure you are a faithful reader of Aish.com, you must have missed my last week’s article about anti-Semitism, in which I mention that blood libels “have persisted from the Middle Ages well into the age of computers.” You might have been edified, as well as horrified, to learn that, as I wrote, “In 1986, Mustafa Tlass, the Defense Minister of Syria, wrote a book called, The Matzah of Zion, accusing Jews of ritual murder. By October, 2002, the book was enjoying its 8th printing and was being translated into English, French, and Italian.”

I know, Wolf, that you work hard to ferret out the truth of what’s happening in the world. We Jews are inveterate truth-seekers. But in one area, we, the ever-rational Jews, are, and historically have always been, in denial: about rabidly irrational anti-Semitism.

For example: When the Nazi juggernaut was taking over all of Europe, Jews figured out that only Jewish men were in danger, because the Germany army could use them in their labor battalions. After all, what use could the Germans make of women, children, and the elderly? Therefore, many young men, at the behest of their mothers and wives, fled eastward, leaving their families behind to the unthinkable fate that only the Jew-hating mind could devise.

Naiveté has proven lethal to the Jewish People again and again.

Even as late as 1944, when the vast majority of the Jews of Poland had already been exterminated and reports of death factories were being whispered throughout Europe, the Jews in Hungary could not bring themselves to believe that the civilized, cultured Germans would actually murder innocent men, women, and children. Eli Wiesel relates in his autobiography how his family rejected the offer of their Christian housemaid to hide them in her village. After all, even if the Germans deported them, how bad could it be?

Naiveté has proven lethal to the Jewish People again and again.

Surely, Wolf, you are bothered by the violent, anti-Semitic demonstrations that have broken out throughout Europe. And I’m sure you saw the cover of this week’s Newsweek: Exodus: Why Europe’s Jews are Fleeing Once Again. Strangely, though, they’re not.

Newsweek quotes a November 2013 survey by the Fundamental Rights Agency of the European Union: “Jews across Europe, the survey noted, ‘face insults, discrimination and physical violence.’” The same survey found that 29% of Europe’s Jews had considered emigrating, as they did not feel safe. Just 29%? What are the other 71% thinking? Are they hoping, as you do, Wolf, that the people calling “Death to the Jews!” don’t really mean it?

Even in France, the country hardest hit by anti-Semitic violence, including the murder of seven Jews in Toulouse in 2012, the “Exodus” documented by Newsweek is a mere trickle:

In 2013, the year after the Toulouse attack, 3,289 left. In the first quarter of this year 1,778 Jews emigrated. “This year I expect 5-6,000 Jews to leave,” says Cukierman [president of the Representative Council of French Jewish Institutions].

The Jewish population of France is 480,000. The “exodus” expected this year, even after synagogues were violently attacked, is a mere 1.25% of France’s Jews. Apparently, myopia is a “Jewish disease.”

Natan Sharansky, the head of the Jewish Agency for Israel, is not so sanguine. In a recent Jewish Chronicle article, he declared, “I believe we are seeing the beginning of the end of Jewish history in Europe.”

Jewish audiences are among the most resistant of all in coming to terms with anti-Semitism – until it reaches an explosive point.

And Robert Wistrich, professor of European and Jewish history at the Hebrew University and a leading expert on anti-Semitism, said in a recent interview by The Times of Israel: “Since 2000, we are on a very steady rising curve of explosive anti-Semitism and anything could set it aflame in a massive way. All the elements are in place and have been since the beginning of this century… The proposition that it will go back to some low level is completely delusional.”

Wistrich adds portentously: “Having spoken in many parts of the world, I can tell you that Jewish audiences are among the most resistant of all in coming to terms with anti-Semitism – until it reaches an explosive point. … The Jews should get out now when they can… Which rational person who cares about their Jewish identity and what will happen to their children, will want to continue in the same way?”

Wistrich concludes the interview by advising Jews around the world, including the United States, to “wake up to it – not that I expect people will.”

Wolf, I’m not trying to scare you. But as Benyamin Netanyahu declared: “From the Holocaust we should learn that when people say they want to kill you, believe them.” When Arabs say that Jews murder Christians to use their blood for matzah, believe that they believe it.

I have one more question for you as one of CNN’s foremost anchors: Since you know that the blood libel the Hamas spokesman stated is blatantly false, why do you believe anything else he says?

Everything and Its Opposite Is Given as a Reason for Antisemitism
What Does Kosher Mean Literally?
Live Abortion Panel
Morality and Abortion: Three Views
Comments
MOST POPULAR IN Jewish Society
Our privacy policy