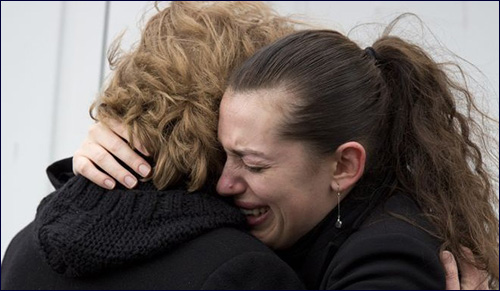 There is no future for you in France. I appeal to you, come home to Israel.

To My Sisters and Brothers in France,

My heart weeps as I read about the ghastly attack on the kosher supermarket in Paris – the tragedy of the murdered, the precarious condition of the wounded, the panic of the hostages. I remember with fondness how you, the Parisian Jewish community, welcomed me when you invited me to speak there three years ago. Your warm smiles and your enthusiastic greetings made me feel like we are indeed one family, the Jewish People.

That visit seems like a lifetime ago. It was “before Toulouse,” where Rabbi Sandler and his two young sons, as well as 8-year-old Miriam Monsonego, were murdered in front of the Jewish school. It was “before the quenelle” anti-Semitic salute swept France. It was “before the attack on the Don Isaac Abravanel synagogue,” when thousands of kefiyeh-clad rioters, armed with axes, knives, and iron bars, kept 200 Jewish worshippers trapped in fear for more than two hours. It was before Jewish men had to take off their kippot on the streets of French cities to avoid being assaulted, and Jewish girls had to fear being pepper-sprayed or worse.

As I read about your plight, I am haunted by a story told to me by a family friend in Los Angeles. All four of his grandparents were wealthy, assimilated, upper class German Jews before World War II. Yet the two families suffered very different fates.

His father’s family, the Adlers, owned a factory that employed a thousand workers. In 1936, a year after the Nuremberg Laws were enacted, the German government confiscated the family’s passports. Herr Adler was well connected. He managed to get the passports back. But he understood that, although his ancestors had lived in Germany for centuries, his family was now in danger because they were Jews. He decided they had to flee Germany without delay, but he suspected that the Nazi authorities were keeping a close eye on his movements. So he devised a plan.

For their son Heinz’s Bar Mitzvah, they threw a lavish party in their mansion, complete with a band and hundreds of guests. In the middle of the party, as crowds of people were coming and going, Herr Adler, with his wife, and two sons, slipped out the back door where a trusted employee was waiting in a car with a few suitcases. They had told no one, not even their servants. By the time their disappearance was discovered, they were safely over the Swiss border.

They left behind everything – their fancy automobiles, their mansion, their rich furnishings. They took with them only diamonds sewn into their clothing that they used to bribe their way from Switzerland to England to America. By the time the fugitives arrived in the United States, they had only enough left to buy a chicken farm.

Frau Adler had never washed a dish in her life. Seeing her shoveling chicken manure in the late 1940s, someone asked her if she was bitter about all she had lost. She was abashed by the question. She had her life, and the lives of her husband and children.

Our friend’s other set of grandparents had a very different saga. Even after the Nuremberg Laws and Kristallnacht, they harbored the illusion that Jews in Germany were not in mortal danger. Only in 1939 did they send one of their daughters (who would become our friend’s mother) to England. By the time the rest of the family tried to escape Germany, it was too late. They all were murdered in the Holocaust.

From this story I learned, if you don’t leave “in the middle of the party,” you may not be able to leave at all.

There is no future for the Jews in France, or in the Ukraine, or anywhere in Europe.

The truth – the painful truth – is that there is no future for the Jews in France, or in the Ukraine, or anywhere in Europe.

Of course picking up and moving to Israel is no easy enterprise. It requires courage and resolve to leave everything -- your home, your job, your community, for an uncertain future. I know. I left “in the middle of the party.” I was 37 years old and single. I came with no savings and no friends or family in Israel. However, I trusted the Torah’s promise that “God’s eyes are on the Land of Israel from the beginning of the year to the end of the year.” This means that everything that happens here in Israel is under direct Divine supervision. Those of you who have spent time in Israel know this. You feel it. Both our manifold blessings and our difficult challenges in this God-soaked Land come directly from God. As Chaya Levine, who moved to Israel from the United States, said a month after her husband was murdered in the Har Nof terror attack: “We are not victims of circumstance or of terror. We are people of choice.”

The choice of the Jews of Israel is to live with the Jewish people in the Jewish homeland. Please, come join us.

With love and pain, your sister,
Sara Yoheved Rigler

Giving My Children Something More Than I Had Growing Up

Shining Light in All the Dark Corners

Israeli Pop Star Turns Down Eurovision Gig Due to Shabbat

A Jewish Call to Action: 10 Ways to Fight Back

It’s #MyOrthodoxLife and I’m Standing Up for It
Should I Break Up, Get Engaged or Keep Dating?
Time Is Your Precious Commodity
A Constant World in Flux
Comments
MOST POPULAR IN Israel
Our privacy policy