An Open Letter from Santa to Jewish Children 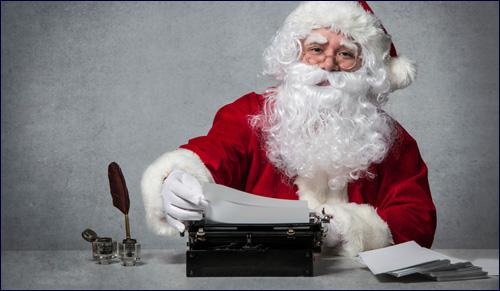 Jewish children, I’ve been outsourced, and now I need your help.

I know that a lot of people are worried about getting or keeping a job, but as I never thought I’d find myself in this position I don’t really have a resume prepared. It would mostly be volunteer work in the community and maybe some customer service experience, and I have served as manager of a large workforce of differently-sized workers (I call them elves but I’m no longer sure that’s the politically correct term). Like Donald Trump, despite all outward appearances I have doctors at the ready to attest to my stellar health. No bankruptcies, though. Even in the worst recessions I managed to scrape together some kind of gift even if it was socks and underwear.

I never thought I would have become extraneous, but it seems I have been replaced by scores of copycats. Outsourced. Mass-produced. Marginalized. So while I’ve loved bringing joy and glad tidings and all of that, I’m looking for a new gig. The writing is on the wall. SantaCon?? I know imitation is the most sincere form of flattery but I’ve got to get out before I’m downsized altogether.

Which brings me to you. I know it’s more work – 8 nights instead of 1, but I really think I’m up to the challenge. 25th of December, 25th of Kislev – it’s all good. You light a candle and I’m there with the gifts. I know you guys are a sophisticated audience of consumers – no stocking stuffers or candy canes or schlocky stuff. And I’ve learned humility the hard way – instead of chocolate replicas of me, we can go with gelt. Maybe my downfall was getting too invested in my own branding, I don’t know, but I’m willing to take a step back and go with service provision as opposed to pushing the image.

Sufganiyot are, frankly, a “trigger food” for me – I can’t stop at just one.

I’ve always enjoyed a good latke, and let’s just say that sufganiyot are, frankly, a “trigger food” for me – I can’t stop at just one. But you don’t have to leave me anything – let’s just say I’m trying to downsize in more ways than one. I get that you already have Judah Maccabee, clearly a hero, and I’m willing to play a more supportive role. In these economic times, we all have to take a hit, and I’m not going to have an ego about being the face of the holiday.

By the way, you should know that mass produced multicolored lights weren’t my idea. I would have gone with lighting candles, with the beauty and light of fire and tradition, like you have. The idea of celebrating the miracle of that light, how the Jews against all odds took back the temple and a day’s worth of oil burned for eight – that touches me deeply. I see it as kind of a metaphor for the light of the Jewish people that others have tried to extinguish repeatedly, but metaphor, miracle – it’s potahto potato as far as I’m concerned. As long as it winds up in a delicious fried celebratory latke, it’s all good.

So I hope you will consider my application for any holiday position you have available. I recognize that this is seasonal work, but if it works out maybe we could have synergy for some future projects. Going through a door instead of a chimney at Passover and some wine instead of milk and cookies – I’m ready for a change. But first things first. I’m happy to come in and interview – I can come dashing through the snow at a moment’s notice. And a nice blue and white flatters me so much more than red velvet ever did.

I look forward to hearing from you soon

Judi Zirin-Hyman has been a lawyer and has taught law to undergraduates, is a mother of twins who are college freshman and an eight year old who misses them, and is at work on her first novel – a contemporary lighthearted take on Tolstoy’s Anna Karenina. And she will share her favorite Hannukkah recipe, which her family has dubbed “Heart Attack on a Plate”, if you are very very nice to her.

WouldJew Believe #5
Extras In Our Own Epic
Evolution 2.0: The Coming Darwinian Revolution
Chukat 5782: Let’s Play the Blame Game!
Comments
MOST POPULAR IN Jewlarious
Our privacy policy