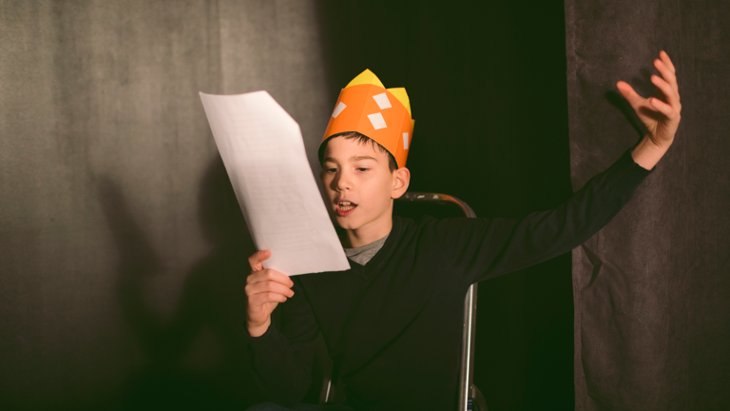 When the beast from Beauty in the Beast takes off his mask, you realize it’s your friend Doobie from shul!

Jewish community theater plays a huge role in our Jewish tradition --one that should not be overlooked. Ever since Fiddler on the Roof came out in 1964, how many communities have come together to share in this beloved experience.

You Have to Go to the Show

Jewish Tradition is about obligation. Going to shul is a requirement, as is seeing Disney in stage form. Thelma showed up for your kid’s Bar Mitzvah, you have to go see her show. That’s how commandments work.

Thelma’s playing the funny woman. And yes, you are required to laugh when she makes a snarky comment. She chose to live in Topeka. She gave up her career in acting, and we support that.

You Know the Actors

Broadway is great, but you don’t know anybody in the show. Why would you waste your money on that?

Jews don’t go to performances because they are good. We go because we know somebody in it. I saw Temple Abraham’s rendition of Beauty and the Beast. Broadway was exciting and there was much talent; during the curtain call the actor playing the beast took off his mask and we all applauded. The surprise and shock at Temple Abraham’s production was much greater. When the beast took off his mask, it was Doobie. My buddy. We sit next to each other in shul. Doobie got a standing ovation for being Doobie. Broadway would never be able to pull that off.

It’s not Bingo. Yet, it’s the same people who have been working the shul Bingo for years. It’s the same grey metal money box. It’s the same foldup table. But now it’s for community theater.

You add “community” to the name of something and a sisterhood will be there. That to me is beautiful.

Paying Entrance is Supporting Something

Every community has people who try to get out of paying. Don’t be the cheap one who calls your friend out to the lobby, to ask if you have a comp for the twelve dollars which is going towards the new youth in crisis theater program. Chana Faigie is backstage and in character. Now, you’re making her show up to the foldup table, in her costume, to find a list that you created when you heard it was twelve dollars. Now everybody knows that Chana Faigie is Yentl. Parents are leaving, because they realize their child is not the star. And the crowd is leaving because they thought Barbra Streisand was showing up. Good job.

You’re Paying for the Kids in Crisis

You’re supporting the kids in crisis. You’re not there to be entertained by the acting. In addition, it’s more exciting to see how Moishe pulls off Les Misérables with no real set design. That is art.

The Director Does It All

You Know Everybody There from Shul

You saw them at shul. Now they’re sitting next to you and fighting over the armrest at the theater. It’s the same shared armrest you fight over at services. The usher is the same gabbai (beadle) who organized the High Holiday seats. The people manning the ticket booth work Bingo. You can’t take these people anywhere.

Affords the Opportunity for People to Not Be Themselves

Accountant by day, song director for a month every year. That’s opportunity.

Nobody cares for Thelma in shul. But she’s much more lovable on stage, where we don’t have to truly pay attention to her. On stage, her nasty comments are not focused on you.

It’s like the shul Kiddush but with vending machines. What’s even better, you can have dairy. Hello Hershey’s bars!

This is good way to save money and to be able to see the fine plays of Broadway, put on by people who aren’t actors. It’s a win-win for all.

Great Place to Take a Date

The whole community will be there. They will be able to go straight up to her and ask her about herself and how you met. This way, you won’t have to answer questions about her and where she comes from, and she will never make you take her to the theater again.

The Dance Is Jewish

Jews love the Shavtimayim B’sasson circle dance. We turn every dance into the Hora circle. They made Les Misérables a Jewish experience. Love it. West Side Story was put on with no spirit fingers. Gangs almost got in a fight, but they turned it into a Hora circle. That is how you make peace.

Finally, Chaim is doing something for the community. This is why he hasn’t shown up to services in five months. He had a line. “The emperor is here.” They needed him at nightly rehearsals to get that down.

Everybody has a role in the ensemble. They’re always willing to have more volunteers. You might even get a role as one of the large group of people that says, “Hail to the king.” That is acting. That, my fellow community members, is a beautiful shared experience.

We can learn a lot from our community theater. Perhaps we should start to celebrate the honors in shul. A Yom Kippur playbill? The ensemble at shul deserves credit. The guy opening up the ark should have a blurb about his accomplishments, explaining why he got the honor. The gabbai deserves the director credit. And the rich people that only show up for Yom Kippur and still pay their yearly dues should have producer credit. If she got that billing, Thelma would be much more involved in the sisterhood.

756!!! Barry Berman All-Time Aliyah King
Bechukotai 5782: Divine Retribution
Behar 5782: Working to Live or Living to Work?
The Wholeness of Being Broken
Comments
MOST POPULAR IN Funny Stuff
Our privacy policy