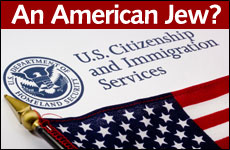 Where does my ultimate loyalty lie?

Growing up in Toronto, the United States was something I usually saw only on television – Irv Weinstein’s newscasts from Buffalo, where there always seemed to be a fire in Tonawanda. Yes, there was the occasional family trip to Florida or New York, and it was always exciting to cross the border. America was the "Big Show"; Canada seemed to be in the minor leagues. America was older, flashier, more exciting – like a big brother you watched from afar with envy.

Ironically, my sister and I both ended up not only marrying Americans, but also moving to the U.S. A few months into my one-way cross over the 49th parallel, I applied to become a resident and received a coveted Green Card.

That status continued for years, and I was content. My husband and I continued our American-Canadian jokes (usually at the expense of Canadians, "eh?"). After filing many forms (and paying many checks – or should I say, "cheques"), our children – having one parent from each country – received dual citizenship, and life continued.

At a certain point I was eligible to apply for U.S. citizenship, and I wrote away for the forms and study packet. But then we moved to the Washington DC area and I stopped the process. You see, in Washington, people take their politics very seriously. It's like a religion. The old adage warns against speaking about politics and religion. Since I’m always speaking about religion, I always tried to steer far away for politics.

Being Canadian gave me safe neutrality on the question of whom I plan to vote for.

I’m friendly with people who are staunch Republicans, and others are staunch Democrats. Many have not only met the President, but can get him on the phone. So when it's election time, they often ask me whom I plan to vote for. Being Canadian gave me safe neutrality, avoiding an uncomfortable question by saying: "I'm not a U.S. citizen so I cannot vote!"

Yet for some reason, my husband and kids felt very strongly that I should be like them – holding a U.S. passport, voting, learning the words to the Star Spangled Banner, and enjoying the Fourth of July. And as my friend, Esther, told me hauntingly: "A Jew can never have enough passports."

So to make everyone happy, I began the process again, which takes several months of filing, fingerprinting, and being investigated. As my teenage daughter studied for her American History AP final, I was memorizing how many members of Congress there are (435), and when the Constitution was signed (1787).

At last, I received the notice to appear for my final interview, test and swearing-in ceremony. The date they want me to appear: September 25, 2012, in nearby Baltimore at 2:20 p.m.

My first thought was, "Whew, at least I’m in town." I travel a lot and was always concerned that my notice to appear would fall on a day I was not available. But then I realized that the afternoon leading to Yom Kippur was not going to be simple! They strongly urge you to not reschedule, because it may result in having to start the application process from the beginning.

The notice said it takes about two hours, and people who have done this before me warned me that it can go even longer if they want you to take the oath as a group.

I calculated that even in bad rush-hour Beltway traffic, if I leave the government office in Baltimore by 5 p.m., 5:30 at the latest, I can make it to Kol Nidre by the 7 p.m. sundown cutoff.

Yet even if I solved Problem #1 (Will I have the time to complete the process?), Problem #2 loomed more serious. Reading through the study booklet (the only thing I ever failed in my life was a Driver's Test, and I still am emotionally scarred from it), I came to the text of the oath:

How can I, a loyal Jew, say that I will be loyal only to the United States?

Surely the United States has been incredibly kind to the Jews – giving us a place of true religious freedom and economic opportunity. Our gratitude is enormous; the synagogue service includes a prayer for the welfare of the government.

Beyond this, the United States has been an incredible ally of the State of Israel – offering economic and military aid in moments of great need.

Surely America is the greatest friend Israel has, and people all over the world will risk their lives for an American passport. I was so close to receiving one, so what’s the hesitation?

But what if it really came down to it? What if I had to choose between one or the other – between my Jewish homeland, and the great United States of America? Where would my ultimate loyalty lie?

Since the day my husband and I left Israel, almost 25 years ago, we have been working, hoping, dreaming, to return. Wherever we lived as a family, we always told our kids, "This is not your home. Israel is your home."

As a friend once told me: "If you can't be in Israel now, send them ahead." Our son just finished serving in the IDF and our oldest daughter just made aliyah. Next year, G-d willing, one more of my children is on the way.

The days ticked by, September 25th was fast approaching, and I was in a bit of an identity crisis: Canadian? American? Jewish?

On September 25 I dressed for Yom Kippur, even though it was many hours away, and drove to Baltimore. The waiting room was packed, and after hours of waiting, I was (of course!) the last one to be called. My test went very well and I scored every answer correctly. They told me to return in a few days to be "sworn in."

I made it home in time for Kol Nidre, but the impending ceremony and oath weighed heavily on me.

Except for the cell phones and video screen, I might have been back on Ellis Island.

A few days later, husband and son accompanied me to the ceremony. The room was filled with new immigrants, about to become citizens, all in the presence of family and friends. Except for the cell phones and video screen of President Obama welcoming us, I might have been back on Ellis Island.

I still did not know what to do. I could not stand up and lie and promise to put this country above all else. Thankfully my son Zev, a former IDF sharpshooter and always a source of rational wisdom, had the answer.

"Ima," he said, “you can affirm the oath (Jews don't swear), and you are not doing it falsely.

“Any loyalty that you have above and beyond the loyalty you are being asked to pledge to the U.S. is not to any particular country," he explained. "It's to the Jewish people."

Truer words were never spoken. My husband nodded in agreement, a judge entered the room, and all of us soon-to-be Americans were asked to rise. I stood proudly and, along with my new compatriots, pledged allegiance to the United States of America.

Why I Learn Torah Daily

Appreciating the Gift of Being Jewish

The Shocking True Story behind Spielberg’s Next Film

The Man on the Street
Blessing on Chewing Gum
Was Rahab a Prostitute?
Extras In Our Own Epic
Comments
MOST POPULAR IN Israel
Our privacy policy