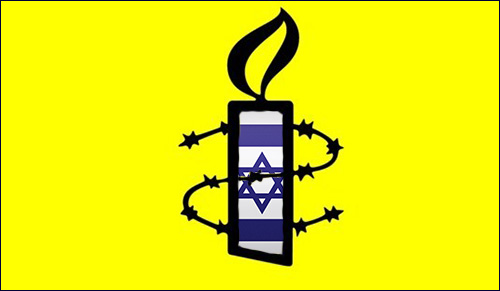 The once laudable organization is obsessed with demonizing the Jewish state.

On Wednesday, November 5, 2014, Amnesty International released its latest attack on Israel: a highly biased report that accuses the Jewish state of war crimes in its fighting in Gaza over the previous summer. Avoiding the use of the word “terror” in relation to Hamas, and failing to mention the terrorist tunnels Hamas built in order to infiltrate Israel and carry out attacks, Amnesty’s report was followed up later in the day with a Tweet from a senior Amnesty official, equating the Jewish state with the terror group ISIS, which has beheaded countless Muslims and Western journalists across Syria and Iraq.

A senior Amnesty official equated the Jewish state with the terror group ISIS.

The report is typical of Amnesty’s highly critical style towards Israel. As Israel responds that Amnesty “serves as a propaganda tool for Hamas and other terror groups” it’s worth asking how such a worthy organization as Amnesty International could have fallen so far, and wound up obsessed with demonizing the Jewish state.

I remember as a child our class writing letters to the USSR, protesting the jailing of Soviet Jews who wanted to immigrate to Israel. We relied on information and names of Jewish prisoners of conscience often provided by Amnesty International. The very term prisoner of conscience was Amnesty’s coinage, and it conveyed the profound injustice facing the refuseniks: Soviet Jews whose petitions to move to Israel had been denied. In those dark days of Soviet repression, it was Amnesty International who detailed the horrendous conditions the prisoners were kept in, and who made sure the world knew their names. Many refuseniks, such as Ida Nudel and Natan Sharansky, today head of Israel’s Jewish Agency, were first identified by Amnesty researchers.

Amnesty International started with a cri de coeur – a vivid 1961 newspaper article by a London lawyer named Peter Benenson titled “The Forgotten Prisoners,” about the many political prisoners languishing in jails around the world. Benenson had recently read about two students in Portugal, then a fascist dictatorship, who were sentenced to seven years in prison for raising their glasses and making a toast to freedom. He wanted to do something about it.

“We have set up an office in London to collect information about the names, numbers, and conditions of what we have decided to call ‘Prisoners of Conscience,’” Benenson announced, “and we define them thus: ‘Any person who is physically restrained (by imprisonment or otherwise) from expressing… any opinion which he honestly holds and which does not advocate or condone personal violence.’" Donations poured in, and Amnesty International, as the new group was called, started collecting and publicizing information about political prisoners.

But as the years passed, Amnesty’s focus became not only exposing prisoners of conscience, but advocating specific policies, too. As its ambitions expanded, Israel increasingly found itself the focus of Amnesty International’s condemnations. The recent, outrageously biased report accusing Israel of war crimes in Gaza is the culmination of a decades-long trend of demonization of the Jewish state.

An early change in Amnesty’s activities came in 2002, at the infamous UN World Conference Against Racism, in Durban, South Africa. Amnesty International officials participated by targeting the Jewish state. Officials distributed material detailing examples of racism and human rights abuses around the world, mentioning only one nation – Israel – by name. Irene Kahn, Amnesty International’s Secretary General, later admitted her organization should have named other countries, too, but the damage was done: the Durban conference, encouraged by the non-governmental organizations like Amnesty in attendance, produced a highly biased anti-Israel final report that still is influencing policy discussions today. Lending its prestige to the hate-fest at Durban, Amnesty helped single out the Jewish state as somehow uniquely evil, unparalleled in human affairs.

Amnesty’s criticism of Israel has increased after Durban; one powerful strategy has been to accuse Israel of war crimes.

2006 was a turning point. That year, after Israel fought a four-week war against the terror group Hezbollah in Lebanon, Amnesty formally accused Israel of war crimes for attacking civilian infrastructure in Lebanon during the fighting. Despite the fact that during the four-week period, Hezbollah fired 3,900 rockets at Israeli towns and cities, killing 44 Israeli civilians and wounding 1,400, Amnesty refused to condemn Hezbollah. Even when Hezbollah cynically used human shields in Lebanon (in violation of international law) by embedding their fighters in civilian population centers, Amnesty’s criticism remained one-sided, directed at the Jewish state.

Prominent legal scholars at the time criticized Amnesty International’s sloppy use of legal terms. Accusing Amnesty of being in a “race to the bottom” in criticizing Israel, Harvard Law Professor Alan Dershowitz called Amnesty’s definition of war crimes “idiosyncratic” and not reflective of international law. Amnesty’s main criteria of calling something a war crime seems to be anything Israel does. David Bernstein, a Law Professor at George Mason University, observed that Amnesty’s criticisms of Israel’s use of force “has nothing to do with human rights or war crimes, and a lot to do with a pacifist attitude that seeks to make war, regardless of the justification for it or the restraint in prosecuting it…an international ‘crime’.”

That year, Amnesty sent its internal documents to the International Criminal Court, for use in case that body brought charges against the Jewish state. Amnesty also started calling for an international arms embargo against Israel, citing Israel’s supposed status as “a grave violator of human rights”.

Despite defending its impartiality, Amnesty’s anti-Israel obsession has intensified. Director of Amnesty International Finland, Frank Johansson, called Israel a “scum state” on his blog in August 2010. Amnesty International Australia has had to repeatedly apologize after highly anti-Semitic posts (some praising Hitler, calling Jews cancer, and calling for death to Jews) have been allowed onto its Facebook page. In 2013 Amnesty awarded its Ambassador of Conscience award to Roger Waters, the Pink Floyd musician who tirelessly calls for boycotting the Jewish state and features a giant inflatable pig wearing a Star of David in his shows.

When Amnesty Campaign Manager Krystian Benedict was asked in 2010 if he would support an event drawing attention to kidnapped Israeli private Gilad Shalit, he responded only if “thousands of Palestinian prisoners” were included as well. Mr. Benedict later told a journalist “Israel is now included in the list of stupid dictatorial regimes who abuse people’s basic human rights – along with Burma, North Korea, Iran and Sudan, it’s government has the same wanton attitude to human beings.” Mr. Benedict was temporarily suspended from Amnesty for posting a joke about Jewish members of Britain’s parliament on Twitter, but was soon reinstated. On Wednesday, November 5, 2014, after Israeli objections to Amnesty’s latest biased report, he Tweeted that Israel is equivalent to the vicious terror group ISIS.

This obsession with Israel and Jews – and sympathy with those who wish to harm them – is reflected in staffing choices at Amnesty International. One Middle East Researcher, Saleh Hijazi, was previously the contact for a political organization called “Another Voice,” whose slogan was “Resist! Boycott! We Are Intifada!” British-based Amnesty researcher Deborah Hyams volunteered as a “human shield” near Bethlehem, preventing Israeli military responses to gunfire and rockets aimed at civilians in nearby Jerusalem. Amnesty’s American-based Israel researcher, Edith Garwood, used to be a member of the anti-Israel International Solidarity Movement. Rasha Abdul-Rahim, a fourth member of Amnesty’s research unit, describes herself as “a ranty Palestinian activist” on Twitter.

In 2010, Gita Saghal, the head of Amnesty International’s Gender Unit was fired after she criticized Amnesty’s close links with Cageprisoners, a British Muslim extremist group whose leader defends violent jihad and the Taliban; she accused Amnesty of “ideological bankruptcy” and said an “atmosphere of terror” prevails inside Amnesty International, where staff cannot question leaders’ ideological views.

Amnesty’s latest report – and its offensive jokes and Tweets about the Jewish state – betray an unhealthy obsession and hatred of Israel. It’s time the world woke up to the sad fact that this once-laudable organization no longer has any moral standing, and ignore its pronouncements.

The Roots of Jihad

Abusing the Holocaust
Korach 5782: Visit to Lift the Spirit
That Time The Ivy League Found A Way To Limit Jewish Enrollment
Would You Rather Be Right or Happy?
Comments
MOST POPULAR IN Israel
Our privacy policy