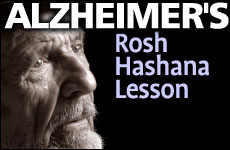 The most important lesson I learned from Sholom still sends me shivers, nearly three decades since his passing.

Sholom was truly exceptional. He had been a well known scholarly rabbi in his earlier years who had lectured widely and participated in leading rabbinic forums in America. He had a vast array of experiences and, upon retirement, was not encumbered by demands on his time. The only catch was that Sholom was fighting a losing battle against Alzheimer's.

I entered Sholom's life through a back door. His devoted wife patiently dressed him and brought him to services at our synagogue each morning. This had been part of his life in healthier years and she hoped that the familiar environment would slow down his decline. At the end of the prayer service, she waited patiently for her husband to come outside. Sholom could barely get up by himself and was too disoriented to find his way to the door. That was the task I volunteered for.

During the 18 months that I helped Sholom, I saw a lot. Alzheimer's peels away the protective layers of personality we build around ourselves, revealing the inner core. Sholom sported a heart-warming smile when he saw me in the mornings. He chuckled in happiness as he stopped to watch children scamper about the streets. He banged on his chair loudly during prayer services, and when someone feigned piety he repeated out loud, "It is meaningless." I was amazed how Sholom, bereft of ability to read or intelligently communicate, could nonetheless pick up the incongruity of someone else's behavior. It was the only time I saw him get mad or frustrated.

I also learned from Sholom how to be patient. I learned how things are not in my control. I learned how to pray, as I asked God to help motivate my heavy friend to try and stand up so we could leave the synagogue and go home. I learned that earnest prayers are answered, and insincere ones are not.

But the most important lesson I learned still sends me shivers, nearly three decades since Sholom's passing.

I learned from Sholom that our true identity is only what we have truly incorporated into ourselves.

The rabbis say that a person can be recognized by his "wallet, anger, and alcoholic beverage." These are the times the individual's true priorities are apparent. What does he spend his money on? What makes him angry? How does he behave when under the influence of alcohol? Stripped to the core, it's the practical actions that define the person.

Alzheimer's also robs the intellect, leaving the base soul intact. I learned from Sholom that our true identity is only what we have truly incorporated into ourselves.

Soon it will be Rosh Hashanah. God peers into our heart, and assesses our inner drives and motives. Are we where we want to be? Are we really even what we think we are? Are we attempting to bridge the gap, to reconcile our ambitions and reality?

As we stand stripped of our exterior veneer before our omniscient God, the question of who are you really is answered in the Heavenly court. Let's hope we will not be embarrassed. It's still not too late to consider the question and work on making necessary changes.

The World Changed. Did I?

The Shofar's Stirring Message for Today
Blessing on Chewing Gum
Was Rahab a Prostitute?
Extras In Our Own Epic
Comments
MOST POPULAR IN Israel
Our privacy policy