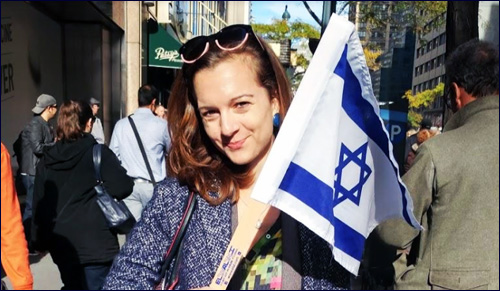 He looked at me right in the eye. All I could read was resentment. But there was sadness, too.

“All of you Hungarians are anti-Semites. It’s just in your blood."

I stood there frozen in the large auditorium of The Museum of Jewish Heritage after an emotional hour honoring the Holocaust Remembrance Day while twenty pairs of eyes stared at me. I knew that anything I said would be used as a judgment against me, the non-Jew. Not against him, the Holocaust survivor.

“I’m so sorry for what some of my people did to you. I will never be able to understand what you went through. But I assure you, we aren’t all anti-Semites.”

“Well, young lady, you can say whatever you want, just look at your government today.”

Up until this point I tried to stand up for my nation, my people, and myself, but once he started to talk about my government, I understood I had nothing else to do here. This was not the place and time to prove that my blood is anything but anti-Semitic.

I wasn’t angry at him. After all, what moral grounds do I have to be angry at a Holocaust survivor? How would I dare? I genuinely wished him to find peace.

I wasn’t angry but I cried until I got home. 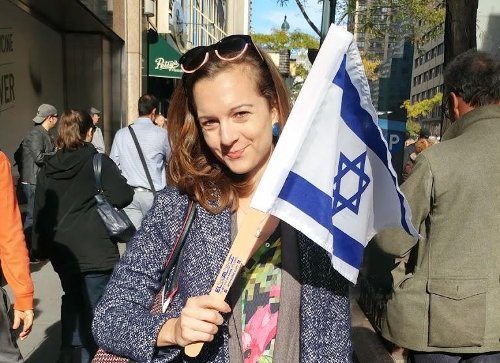 At an Israel rally against a UN resolution

After that encounter I met four other Holocaust survivors in person and read memoirs written by three others. And I realized something that is true for anyone who went through a trauma in life. There are those who come out stronger, find a way to thrive, and share their stories to help others (and perhaps to heal themselves a little more). And there are those who face life with resentment, wishing for revenge, and still share their stories. The former group considers the Holocaust as only part of their story. The latter group never left the concentration camp; the Holocaust is their full story.

On the way home, with tears behind my sunglasses, I wondered why I even felt the need to go to him and say sorry? Why was I so surprised that he would not accept my feeble apology?

Later that week I realized that I had a utopic vision about Holocaust survivors. I thought that by surviving hell they would embrace life and be able to survive everything life placed in front of them. I imagined them kind and caring, never wanting to hurt anyone because they were hurt so badly. I imagined that they share their stories not only to make sure we never forget but also to show us that we always have a choice in life. Just as they chose to survive, they were now choosing to thrive. I imagined them as superheroes.

A lot of that remains true but what I never considered is that while they are superheroes, they are also human beings, and that makes everything so much more complex. How naïve I was.

That Holocaust survivor who put me on a stand as a Hungarian sent me on a journey that allowed me to understand that surviving the concentration camps wasn’t the only hardship they endured.  Surviving freedom, waking up the day after liberation, taking those first steps after the DP camps – the decision to start their second act and choose life is also incredibly difficult.

I can show that we are not all anti-Semitic by continuing to stand with Israel and the Jewish people.

I still struggle to find the right balance between my patriotic Hungarian heart and my love towards Jews and Israel. I realize that I am an anomaly. Since my first trip to Israel in 2012, I am torn between worlds. In one world I am immersed in Judaism and surrounded by Jews.  I work with pro-Israel organizations to make sure their message is heard.  I enrolled in a MA Program to study Judaism, I am a loud advocate of changing the stereotypes about Jews and Israel, and I spend my evenings learning Hebrew. In my other world, I often feel like an outsider, an Eastern European non-Jew who should feel guilty and apologize for what happened before I was even born.

When I am confronted by Jews with stereotypes regarding my non-Jewish identity, I am faced with a choice. I can get upset and hurt, and turn my back on this whole Jewish world and stop investing so much time into something that isn’t always rewarding or appreciative. Or I can accept that this is just one person who is deep down expressing his own inner pain, and show that we are not all anti-Semitic by continuing to stand with Israel and the Jewish people.

For many Holocaust survivors, their revenge on Hitler is the ability to cuddle their grandchildren. My revenge against the frequently expressed hatred towards my nation is to stand with the Jews in spite of everything.

Because what good it will bring if we stare at each other in resentment? We’d just freeze history in a moment that should never have happened.

Virag is a digital communications strategist and personal branding consultant, who is helping individuals and brand owners building a successful online media presence that is authentic, sustainable, and recognizable. She is also a Judaism graduate student at Touro College in Manhattan and the founder of Almost Jewish, a pro-Israel movement that aims to change the stereotypes about Israel and the Jewish people one day at a time. 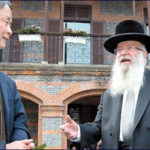 The Rabbi from Shanghai6 min read 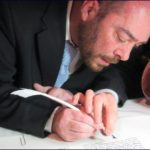 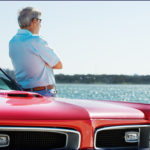