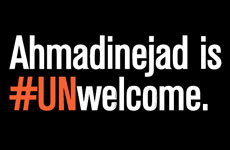 We cannot remain silent while a man this evil visits New York and addresses the UN.

Once again, Iranian President Mahmoud Ahmadinejad will address the United Nations General Assembly next week in New York City. New York area-protestors and student activists across the US are mobilizing to send a clear message: Ahmadinejad is #UNWELCOME!

Join the online movement to prevent Iran from developing nuclear weapons, and to protect the rights of the Iranian people on Thursday, September 20.

Here are 10 reasons why:

1. Mahmoud Ahmadinejad and other regime officials regularly call for the destruction of Israel, a UN member state.

2. The Iranian regime supports the Assad regime that has killed more than 20,000 in the past year.

3. The regime seeks nuclear weapons capabilities, and violates international law in pursuit of them.

4. The Iranian regime executes more people per capita than any other country in the world.

6. The regime denies its citizens rights based upon gender, ethnicity, religion, sexuality, and politics.

7. The regime is the single largest supporter of international terrorism.

8. The regime has regularly targeted American military personnel deployed in the Middle East.

9. The regime regularly threatens to close the Strait of Hormuz, thereby threatening the global economy.

10. The regime has institutionalized discrimination in education based upon religious belief, and at some institutions, gender.

We cannot remain silent while a man this evil visits New York and addresses the UN. Can’t be there to protest in person? Visit “New York To Ahmadinejad: You’re #UNWELCOME” to take action ONLINE or in your local community! 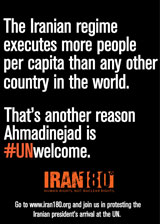 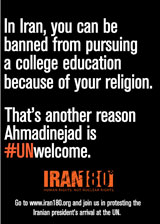 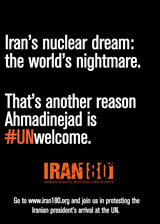 Sports, Politics and Our Search for Meaning

Ilhan Omar Has a Problem with Jews