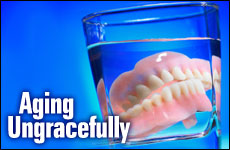 I’m lying on a mat at the gym, bored out of my mind but still keeping up with an endless loop of ab crunches. Joey, the perky new instructor, has us doing this at warp speed. You know, just to get the heart rate up. I keep stealing glances at the clock – has it only been eight minutes? Oral surgery seemed to go faster than this.

Most of the other dozen women here are young enough to be my daughters, beautiful and toned enough to be on TV. But this is West Hollywood – they probably are on TV when they aren’t toiling to further perfect the Body Beautiful. The woman to my right looks like she might be close to my age, but who really can tell? In Los Angeles, no one is allowed to look older than 35. There are more cosmetic dermatology centers here than there are Starbucks. That’s a whole lot of nipping, tucking, lasering, liposuctioning, derma-filling, chemical peeling, Botoxing, and collagen-injecting going on, slow economic recovery be darned. There is even a new procedure called a Vampire Facelift ®, which sucks up your blood as well as thousands of your dollars.

Do they realize they don’t look young, they look like a self-parody?

From my observation, it seems that almost anyone who can afford to quietly indulges in age-defying medical wizardry. This makes it hard to figure out how old a lot of people are. But sometimes people take it too far. I have seen women and even men whose faces are so tight, whose lips are so overinflated and who have those tell-tale “chipmunk” cheek implants that I wonder: Do they realize they don’t look young, they look like a self-parody?

But I am not immune from my generation’s obsession with trying to look younger than my years either. My spoiled generation has convinced itself that getting old is something that only happens to other people. The oldest of the Baby Boomers (not me!) who used to sneer, “Don’t trust anyone over 30” and who favored the natural (unshaved, unwashed, unkempt) look changed their mantra when they hit their 40s and 50s. Then it became: “Don’t trust anyone who looks older than 30!” That same rebellious bunch who chanted in the streets, “Hell no, we won’t go!” about the Vietnam War are chanting the same thing now – about old age.

I wake up every morning thanking the Almighty for giving me a new day. I thank Him for being able to see, to stand, to think, and other “basic” things I would otherwise take for granted. But when I am done being thankful, I admit that when I look in the mirror I sometimes spend too much time wondering if my new, age-defying, super-restoring, super-revitalizing, advanced-repairing, cell-regenerating face cream made with revolutionary bio-technology is working yet? Will my skin become as luminous and young-looking as they promise in their airbrushed ads?

Oh dear, I digressed – this is what happens to the aging brain. So back at the gym, where I began a few paragraphs ago, I’m still ab crunching away, regretting that I used my most expensive face cream just an hour ago since I’m sweating it all off now. Joey comes over to me to help me fine-tune my motions. She is dangerously good-looking, with huge hazel eyes, freckles, curled eyelashes as long as my pinky finger, and dimples. I am grateful that this girl didn’t live on my block while I was raising my boys. She corrects my form, careful not to drip sweat on me, and then applauds how well I am keeping up.

“Not bad for 52, you mean?” I say, unable to resist complimenting myself. Because, as Hillel once said, “If I do not compliment myself, who will compliment me?” Okay, that’s not exactly what he said, but it was something about standing up for yourself, so close enough.

“No way! You look amazing!” she says, patting me kindly on the knee (the one that already had surgery) and moving on to the next student.

Why was she so amazed? What does she think 52 looks like these days, especially when I am squandering so much money on the best anti-aging skin care that targets aging mechanisms at the cellular level? Of course, Joey can’t be more than 25. From her vantage point, I may be so unimaginably old that just looking younger than Barbara Bush might be enough to knock her sweat socks off.

It’s really a little crazy-making, these mixed messages about aging. On one hand, 50 is supposedly the new 30. People start second careers and second families in their 40s or 50s. A huge industry has risen up to deal with mid-life transitions and mid-life lifestyles. After all, we are living longer now than anyone has almost since biblical times. We need to figure out how to make the most of these bonus decades. But for all the supposed cheerleading about how great the second half of life is, we are not allowed to look like we are getting older. Why not? What’s the big crime?

This generation still has a lot to learn from Jewish history about aging gracefully and second careers. Look at Moses. He was 80 years old when he retired from being a shepherd – probably without a 401K package – to become the leader of the Jewish people. And if you think getting sheep to follow you is tough, try getting a bunch of Jews to all head in the same direction! Women today who become first-time mothers in their 40s or sometimes after 50 have nothing on our matriarch Sarah. Not only was she 90 when she became a mother, but she was still so stunningly beautiful in old age that she was kidnapped by a king! I’m willing to bet she didn’t have a bathroom cabinet filled with expensive potions, lotions and serums promising “revolutionary” and “synchronized” targeting of “problem” areas, either. I do wonder, though: did she at least have a good sun screen?

Truthfully, the women I have met who look the most unbelievable “after a certain age” are the women who spend way more time worshipping the Almighty and doing mitzvahs than they spend worshipping at the Estee Lauder counter in the department store. This is a pattern I have noticed for years, and trust me, I’ve been paying close attention. This won’t stop me from splurging on the occasional pricey jar of “regenerating” anti-oxidant face creams, mind you, but at least I get that aging gracefully involves at least as much face time “working out” with the Almighty as it does in the sweaty gym.

And if you want to compliment me that I look younger than my age, go right ahead, bubeleh! It’ll make me feel less guilty about all those pricey face creams in my bathroom cabinet.