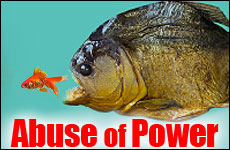 An interesting experiment took place at Berkeley recently. It involved a game of monopoly - but with unusual rules. (I have a hard enough time holding onto my hotels and railroads with the regular rules!) One player was given $2000 to start and $200 every time he passed Go. The other participant was given half that. Initially the player with the unfair advantage felt uncomfortable. But soon he began to feel powerful and dismissive. Ultimately he became dispassionate and emotionless, focused solely on winning.

The psychologist, Paul Piff, who constructed this experiment, believes it supports his thesis that living high on the socioeconomic ladder dehumanizes people. He suggests that the rich are more selfish and less empathic than others.

This seems to reflect a belief that altruism and empathy are innate qualities, destroyed by life's circumstances, particularly the financial ones. I believe the Torah would suggest otherwise, that people are innately self-centered and lacking empathy and that part of the goal of life is to work to develop these qualities. It is a fundamental tenet of Jewish life that every situation has its challenges - some are unique to being rich and others specific to being poor. Our job is to do the best we can with whatever hand we are dealt.

But back to Professor Piff's experiment. Acknowledging that I don't know all the controls or variables involved, I could suggest a few other possible explanations of the wealthier player's behavior. These are certainly qualities to be concerned about but not as reductive as possessing significant financial resources.

You don't have to rule a country to take advantage of people or brutalize them.

One is the desire for power. From the snake's approach to Eve in the Garden of Eden (Don't you want to be just like God?) and throughout history, we have seen how power can seduce and corrupt. And it doesn't have to be a lot of power. The loan officer at the bank, the TSA worker at the airport, your doctor, the school principal - there are many people in our lives with power and not all of them wield it fairly and reasonably, thoughtfully and considerately.

Some love to lord it over others. You don't have to rule a country to take advantage of people or brutalize them. Sometimes it's more subtle. But whatever small amount of power people have, the tendency is to manipulate and demean others. This is an innate human tendency that we need to fight against. This experiment demonstrates, albeit in a small way, what happens when we are not vigilant in that battle.

There is another Jewish idea that may be at play here: one mitzvah leads to another. If you accustom yourself to doing good deeds, more good deeds will follow. Jewish behavior modification, if you will.

Misusing power and lack of empathy are not the sole purview of the wealthy.

Unfortunately, the opposite is also true: one negative action leads to another . And we get used to them. I still remember a fellow law student who went to work for a large real estate firm after graduation. As part of her job, she needed to evict some elderly tenants from their homes. (I'm not commenting on the legality or social issues here, only the empathy quotient.) The first time she did it, she found it very painful and difficult. She cried in recounting the story. The second time it was easier - no tears. The third time, she was laughing about it.

We are adaptive creatures - for good and for bad. In this experiment, we see how easily we can demean the needs, almost the existence even, of others.

It's too easy to attack the rich. Then we never have to introspect; then we never have to do any work ourselves. But if we look at this experiment from a broader perspective, we can see that we could all fall into this trap, that we all need to be on our guard. Misusing power and lack of empathy are not the sole purview of the wealthy. I don't believe, as Piff says, that "the rich are way more likely to prioritize their own self-interests about the interests of other people." I think this is human nature. It’s a battle we all need to constantly wage.

Condemning the Terrorists
Why My Iranian Mother Didn’t Want Me to Become a Religious Fanatic
The Jewish History of Prague
Why the Sexual Revolution was Bad for Women
Comments
MOST POPULAR IN Current Issues
Our privacy policy
Aish.com Is Looking for Great Writers