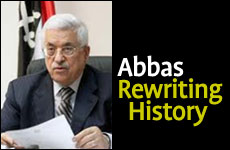 The lies and distortions of Mahmoud Abbas in his NYT op-ed is a clear rejection of peace.

Opening The New York Times this morning, my jaw dropped as I reached the op-ed page. There, featured prominently, with accompanying artwork, was an article by Palestinian President Mahmoud Abbas outlining the Palestinian strategy for a unilateral declaration of statehood this September at the UN General Assembly. The stunning piece says no to a negotiated peace with Israel and rewrites more than 60 years of history.

To begin with, he blithely ignores basic facts that have considerable bearing on the present situation.

Moreover, by declaring his determination to pursue UN recognition “of the State of Palestine on the 1967 border,” he is hurtling toward confrontation not only with Israel, but also with other key nations, including the United States, that have publicly declared their opposition to this shortsighted path. Such a strategy contributes not to the quest for peace, but rather its opposite – intensification of the conflict. Let’s be clear: this strategy will effectively end the Israeli-Palestinian peace process.

Among the astonishing elements in his op-ed, Abbas ignores the war unleashed by Arab armies in 1948 to obliterate the new State of Israel, following the recommendation of the UN General Assembly for the establishment of Jewish and Arab nations in the British-ruled Mandatory Palestine.

The Arab world, including Palestinian leadership, categorically rejected the 1947 UN recommendation, preferring war to peace. War, tragically, creates refugee populations. This was no exception, but it was also far from unique. What is unique is that the Palestinian refugee question has been kept alive for generations without any attempt at permanent resettlement.

Abbas also conveniently neglects to mention that there were two refugee populations, of relatively equal size, created by the Arab-initiated conflict. The other consisted of hundreds of thousands of Jews from Arab countries who were expelled or given little choice but to leave. Their plight has never been recognized by the Arab world.

The Palestinian leader also omits any reference to the fact that, from 1948 to 1967, the Palestinians could have had a state of their own in the West Bank, eastern Jerusalem, and Gaza. All these territories were entirely in Arab, not Israeli, hands. Yet there was no move to sovereignty. Why?

He also fails to mention the efforts to resolve the fate of the disputed lands since 1967, when Israel became the unsought occupier of these very same territories after a war of self-defense.

Four Israeli prime ministers, beginning with Ehud Barak in 2000, have sought to negotiate a two-state agreement with their Palestinian counterparts. In every case, the Palestinians, offering one excuse or another, rejected the extended hand and refused to cross the goal line of peace together. Most recently, when Binyamin Netanyahu took the unprecedented step of a ten-month settlement freeze to show his good faith, Abbas was AWOL for the first nine months, unwilling even to return to the negotiating table.

Nor does Abbas address the newest complication – an accord between Hamas and Fatah. Hamas is committed in word and deed to the destruction of the State of Israel. It is deemed a terrorist organization by the United States and European Union. It seeks the imposition of Sharia law on all territory it occupies. Hamas cannot simply be airbrushed out of the picture for the benefit of readers of the New York Times.

Instead, he paints a rosy picture of the new State of Palestine as “a peace-loving nation, committed to human rights, democracy, the rule of law and the principles of the United Nations Charter.”

All noble aims, but a far cry from where the West Bank, much less Gaza, is today. Are we simply to take his word for it because he says it? Is Israel to risk its own security in what would become a country nine miles wide at its narrowest point because Abbas waxes poetic about a vision that is still, shall we say, rather far from the reality on the ground? The teaching of incitement, glorification of terrorists, torture, legal abuses, and failure to recognize Israel’s inherent legitimacy are still prevalent in land under Palestinian Authority rule, and Gaza, of course, is far worse.

The truth of the matter is that, despite what Abbas may allege, the only true path to Palestinian statehood is at the negotiating table with the Israeli government. Attempts to circumvent this critical process will only violate signed commitments that permanent-status issues must be agreed to by both parties. There is no easy way out, no quick fix for the hard work that has to be done.

Finally, Abbas’s words are a slap in the face to the United States. The American position, articulated by Secretary of State Hillary Clinton last month, is: “We do not support any unilateral effort by the Palestinians to go to the United Nations to try to obtain some authorization or approval vote with respect to statehood. We think we can only achieve the two-state solution that we strongly advocate through negotiations.”

By the way, as a senator from New York in 2000, Clinton, witnessing a similar attempt by the Palestinians to do an end-run around direct talks with Israel, declared: “It must be clear that any unilateral declaration of Palestinian statehood would be entirely unacceptable and should be met with a cutoff of United States assistance.”

AJC reaffirms its support for a negotiated two-state settlement based on direct talks between the parties involved. We believe it is an achievable goal if there is sufficient political will and courage.

Israel is ready. It has said so repeatedly and taken concrete steps to demonstrate its sincerity. With this op-ed, President Abbas has thumbed his nose at the entire process and done grave damage to the search for a lasting peace.

My Fellow Palestinians, The Jews are Here to Stay

The Mufti and the Holocaust

The Miracle, at 60
The Promise Of The Land
Which Chat Are You On?: Parshas Behar/Lag Ba’Omer
Do You Like Slow-Cooked Food? Thank the Jews
Comments
MOST POPULAR IN Middle East
Our privacy policy