A Member of the Club 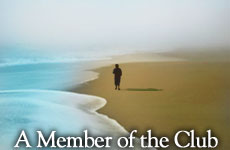 Death has never been an infrequent occurrence. But I wasn't in the know.

During the past year, it has seemed increasingly strange that so many people have been leaving this world -- some of whom I knew personally, most of whom I did not. They were the parents of friends, the spouses, the sisters and brothers ... the children. Up until just recently, I wondered why all of a sudden it was happening so often.

It has gradually dawned upon me, however, that death has never been an infrequent occurrence. Death is so common. (Could it be that everything in life that is common is in reality extraordinary?) It's just that I myself wasn't really sensitized to the phenomenon until this year. For this has been the year of my initiation into what I'm discovering only now is an elite club, a secret society, an unofficial confederacy the existence of which I was up till now blithely unaware. On the other hand, this club (of which I am now a proud constituent) is so democratic and vast that it excludes no one. It ultimately opens its doors to every member of the human race.

It's the noble yet informal association of those who have experienced the loss of someone they love.

It wasn't that I hadn't heard of death before. We do get catastrophes on the eight o'clock news, famines in the morning paper. Obituary pages have been published every day of my life, and it has never been a shock to see the names of historical figures followed by the dates of their entrance and exit from the world stage. People have told me how they suffered the decease of their loved ones, and I've empathized deeply.

But I wasn't in the know.

You only learn the rules, gradually, when you're already there.

Shortly after my initiation, I wondered why no one had ever prepared me for my inevitable future enrollment, or at least told me the rules and regulations whereby one joins. But the fact is, you only learn the rules, gradually, when you're already there. Even were someone to drill you carefully on what happens under such circumstances, you'd still find yourself, when it finally happens, in the driver's seat of a self driving car, that's going quite fast and not responding appropriately to your foot on the brake.

I had always perceived signs of the club's existence but hadn't had eyes to see. I had heard people talking about it and hadn't had ears to understand.

For instance, a friend once told me that in the ninth month of the year of mourning for her father, she was finally able to discard the button (which she'd kept in her wallet) that had popped off his shirt on the day he died. I didn't understand.

I didn't understand when a woman sitting shivah some years ago got angry at a visitor for saying: "You're lucky your sister lived a good, full life. Seventy's a good age."

I didn't understand how someone I know could have sat up all night with his mother to hold her hand the night before she died, and still feel that he hadn't had a chance to say goodbye.

The chief and unmistakable mark of membership (which only now do I recognize as such) is a certain kind of crying. I saw it last Tuesday at a funeral and this Sunday in a newspaper photograph. The person in question cries not because he "knows it's wise to express his feelings," nor with the hope of "getting over" his feelings, nor because he had learned throughout life that weeping elicits sympathy and understanding on the part of the beholder. In short, the mourner is crying without ulterior motive. People may be standing around watching him but he is alone. He knows, perhaps for the first time in his life, that no human being can help him, can restore what's been lost. There's nowhere to turn.

Nowhere to turn ... in this human world, that is. For what the death of a loved one does is to automatically turn one's eyes to the invisible world into which that person has vanished. You can see this brush of the infinite on the faces of anyone's who's mourning, even on the face of one who considers himself an agnostic, or an atheist. His face has been turned toward the big question marks: Why? What? Where did she/he go? The mourner's eyes are focused over there, and his cries can do nothing but direct themselves involuntarily towards his own Source. Losing someone who is within oneself still very much alive is every human being's personal introduction to the world beyond. From this point on, some part of him will always be drawn to the other side even while he's still here. His mind will dwell to some extent on the hereafter.

No matter how much one loves the person when he's alive, nothing reveals one's attachment as much as losing him.

As I said before, I wondered why no one ever prepared me, but now I know there is no such thing. One woman told me that her father had been sick for 20 years, and that her whole family had been in a perpetual state of apprehension that he would pass away. When it finally happened, however, in her father's late sixties, she was overwhelmed by the shock. For there's something very different about having someone still here, though ill and endangered, from not having him here at all. It's like a miracle in reverse. How could he vanish like that into thin air? The familiar mannerisms, those particular hands, that way of sitting and standing and, most important, of speaking. Everything about him that one knew is belatedly endowed with a magical luminance. And why is it that it's only when the person dies that the veils fall away from one's ego hindered eyes and one begins to see the person without defensiveness? Nothing pulls the curtains away as swiftly and surely as death. "Boy," said my sister, "in the three seconds after the phone call, did I ever get smart."

No matter how much one loves the person when he's alive, nothing reveals one's attachment as much as losing him. It's like an extremely long epic poem one has no awareness of having memorized until the poem itself has been permanently erased, and for some reason it has been ordained that to commit it again to paper is an impossibility. Then every line, every comma, every single phrase starts coming poignantly, unbearably tender, to mind. Or it's like a flower that fully opens only when you no longer have the flower itself, but only the memory of the flower. How unworldly, how unimaginably marvelous it would be for people to appreciate each other's presence, but it's only a person's complete absence that makes him completely visible to others.

Thank God for Jewish law. The steady progression of systematic time brackets within which to schedule your grief serves as a safety net. For one year you're free to tumble around and plummet with your sorrow. You know that when the year's up you'll have to catch yourself from falling any further.

King Solomon said that it's better to go to a house of mourning than to a house of celebration. Now I know why, because I'm a card carrying member.

And, in all probability, so are you. .

Excerpted from "Don't You Know It's a Perfect World?" published by Targum Press.

My 18 Days of Waiting

I Hit a Deer

The Chassidic Rebbe and the Guinea Pig

The Power of Pickled Tomatoes
The Promise Of The Land
Which Chat Are You On?: Parshas Behar/Lag Ba’Omer
Do You Like Slow-Cooked Food? Thank the Jews
Comments
MOST POPULAR IN Spiritual Odysseys
Our privacy policy