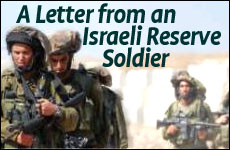 Our young country, built from the ashes of the Holocaust, does not turn its back on humanity.

My name is Aron Adler. I am 25 years old, was born in Brooklyn, New York, and raised in Efrat, Israel. Though very busy, I don't view my life as unusual. Most of the time, I am just another Israeli citizen. During the day I work as a paramedic in Magen David Adom, Israel's national EMS service. At night, I'm in my first year of law school. I got married this October and am starting a new chapter of life together with my wonderful wife Shulamit.

A few weeks out of every year, I'm called up to the Israeli army to do my reserve duty. I serve as a paramedic in an IDF paratrooper unit. My squad is made up of others like me; people living normal lives who step up to serve when responsibility calls. The oldest in my squad is 58, a father of four girls and grandfather of two; there are two bankers, one engineer, a holistic healer, and my 24-year-old commander who is still trying to figure out what to do with his life. Most of the year we are just normal people living our lives, but for 15-20 days each year we are soldiers on the front lines preparing for a war that we hope we never have to fight.

This year, our reserve unit was stationed on the border between Israel, Egypt and the Gaza Strip in an area called "Kerem Shalom." Above and beyond the "typical" things for which we train – war, terrorism, border infiltration, etc., this year we were confronted by a new challenge. Several years ago, a trend started of African refugees crossing the Egyptian border from Sinai into Israel to seek asylum from the atrocities in Darfur. What started out as a small number of men, women and children fleeing from the machetes of the Janjaweed and violent fundamentalists to seek a better life elsewhere, turned into an organized industry of human trafficking. In return for huge sums of money, sometimes entire life savings paid to Bedouin "guides," these refugees are promised to be transported from Sudan, Eritrea and other African countries through Egypt and the Sinai desert, into the safe haven of Israel.

We increasingly hear horror stories of the atrocities these refugees suffer on their way to freedom. They are subject to, and victims of extortion, rape, murder and even organ theft, their bodies left to rot in the desert. Then, if lucky, after surviving this gruesome experience whose prize is freedom, when only a barbed wire fence separates them from Israel and their goal, they must go through the final death run and try to evade the bullets of the Egyptian soldiers stationed along the border. Egypt's soldiers are ordered to shoot to kill anyone trying to cross the border OUT of Egypt and into Israel. It's an almost nightly event.

For those who finally get across the border, the first people they encounter are Israeli soldiers, people like me and those in my unit, who are tasked with a primary mission of defending the lives of the Israeli people. On one side of the border soldiers shoot to kill. On the other side, they know they will be treated with more respect than in any of the countries they crossed to get to this point.

The region where it all happens is highly sensitive and risky from a security point of view, an area stricken with terror at every turn. It's just a few miles south of the place where Gilad Shalit was kidnapped. And yet the Israeli soldiers who are confronted with these refugees do it not with rifles aimed at them, but with a helping hand and an open heart. The refugees are taken to a nearby IDF base, given clean clothes, a hot drink, food and medical attention. They are finally safe.

Even though I live in Israel and am aware through media reports of the events that take place on the Egyptian border, I never understood the intensity and complexity of the scenario until I experienced it myself.

In the course of the past few nights, I have witnessed much. At 9 p.m. last night, the first reports came in of gunfire heard from the Egyptian border. Minutes later, IDF scouts spotted small groups of people trying to get across the fence. In the period of about one hour, we picked up 13 men - cold, barefoot, dehydrated - some wearing nothing except underpants. Their bodies were covered with lacerations and other wounds. We gathered them in a room, gave them blankets, tea and treated their wounds. I don't speak a word of their language, but the look on their faces said it all and reminded me once again why I am so proud to be a Jew and an Israeli. Sadly, it was later determined that the gunshots we heard were deadly, killing three others fleeing for their lives.

During the 350 days a year when I am not on active duty, when I am just another man trying to get by, the people tasked with doing this amazing job, this amazing deed, the people witnessing these events, are mostly young Israeli soldiers just out of high school, serving their compulsory time in the IDF, some only 18 years old.

The refugees flooding into Israel are a heavy burden on our small country. More than 100,000 refugees have fled this way, and hundreds more cross the border every month. The social, economic and humanitarian issues created by this influx of refugees are immense. There are serious security consequences for Israel as well. This influx of African refugees poses a crisis for Israel. Israel has yet to come up with the solutions required to deal with this crisis effectively, balancing its' sensitive social, economic and security issues, at the same time striving to care for the refugees.

I don't have the answers to these complex problems which desperately need to be resolved. I'm not writing these words with the intention of taking a political position or a tactical stand on the issue.

Israel has put politics aside to take the ethical humane path, as so often  before.

I am writing to tell you and the entire world what's really happening down here on the Egyptian/Israeli border. And to tell you that despite all the serious problems created by this national crisis, these refugees have no reason to fear us. Because they know, as the entire world needs to know, that Israel has not shut its eyes to their suffering and pain. Israel has not looked the other way. The State of Israel has put politics aside to take the ethical and humane path as it has so often done before, in every instance of human suffering and natural disasters around the globe. We Jews know only too well about suffering and pain. The Jewish people have been there. We have been the refugees and the persecuted so many times, over thousands of years, all over the world.

Today, when African refugees flood our borders in search of freedom and better lives, and some for fear of their lives, it is particularly noteworthy how Israel deals with them, despite the enormous strain it puts on our country on so many levels.

Our young and thriving Jewish people and country, built from the ashes of the Holocaust, do not turn their backs on humanity. Though I already knew that, this week I once again experienced it firsthand. I am overwhelmed with emotion and immensely proud to be a member of this nation.

With love of Israel,
Aron Adler, writing from the Israel/Gaza/Egyptian border

Israel Snapshot
It Takes A Lot Of Faith To Be An Atheist
How Instagram Brought Back This Nostalgic Soup
What Makes Eli Run?
Comments
MOST POPULAR IN Israel
Our privacy policy