A Leg to Stand On

At 13, Yitzy Haber decided to have his cancerous leg amputated. He's never looked back.

Yitzy Haber is the kind of guy you’d want to be stuck with on a broken elevator. Infectiously upbeat, he has a knack for making the best of every situation. He’s had a lot of practice. 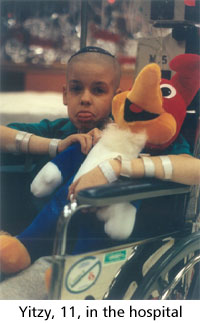 In the suburbs of Jersey, Yitzy was a typical boy. He loved the Mets, model airplanes and playing sports. Despite a stout physique, he was the fastest runner in his class. He had a thick, unruly mop of dark, wavy hair, and an irresistible smile that charmed him out of many a mishap. Life was good.

But during little league practice when Yitzy was 11, he suddenly felt pain in his right leg. When it worsened, doctors put him on crutches, thinking perhaps one leg was growing faster than the other. Then came more tests and X-rays. Finally, boy and parents received the diagnosis: cancer. He had osteosarcoma — one of the most common bone cancers in children.

He knew his mother was upset by the mascara streaking her face. But he didn’t take it too seriously; what did he know about cancer? “I thought I’d maybe have a week off of school, lying in bed, watching TV, popping a couple pills,” says Haber, now a trim, bearded 30 year old who still wears an irrepressible grin. But nothing could prepare him for what was to come: multiple surgeries, and a year of chemotherapy and all its side effects — hair loss, excessive vomiting, infections. Throughout the ordeal, he and his family were kept afloat by support from their Teaneck, NJ community, and from Chai Lifeline, an international organization that provides countless services for children with cancer and their families at no cost.

“Chai Lifeline paid for tutors, and they had visitors coming round the clock,” Yitzy remembers. “They provided social workers for me and for my parents, who were going through torture, and even for my siblings. My brother was only six and no one thought he understood what was happening. Then he asked the social worker, ‘Is Yitzy going to die?’” 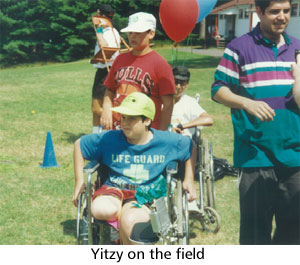 Yitzy’s treatment, meanwhile, was anything but clear; an allograft (donor bone), more surgeries, more infections, pins, rods. He felt like a puppet. The doctor gave the now 13 year old three choices: insert another allograft from the knee down, leaving his entire leg straight forever; replace his knee and bone with a metal knee and rod, which would leave him at a high risk of infection and require more surgeries to replace the implants as he grew (and which could easily crack, severely limiting any normal boy-action); or amputation from above the knee down. Yitzy’s parents left the decision up to him.

"At that point I became really focused on being happy, even without a leg. I’ve never looked back.”

Making such a momentous decision was one thing; the shock of waking up one day without his leg, quite another.

“I remember clearly the last time I had my leg. And then not having it,” he recounts. “I can’t even describe the feeling — it was just a shock. But then, in the cancer ward, I saw this gloomy, depressed woman in a wheelchair, and I thought, if you walk around like that, for sure you’re going to die. But if you’re happy, I told myself, your body will want to fight it, and you’ll win. I had always been upbeat, but at that point I became really focused on being happy, even without a leg. I’ve never looked back.”

Of course, all the optimism and determination in the world couldn’t begin to erase the countless challenges. For years Yitzy experienced phantom sensations where his leg once was — from the benign, as if he was wiggling his toes, or an inexplicable itch on a part of his leg he could not locate, to the excruciating, with a searing ache where his calf or ankle once was. The phantom pain has mostly disappeared, but to this day, if he trips in a way that would have caused a sprained ankle, he’ll automatically start limping. “But now,” he says, “I can tell myself that it doesn’t hurt, that there’s no ankle there, and I can stop myself from limping.” 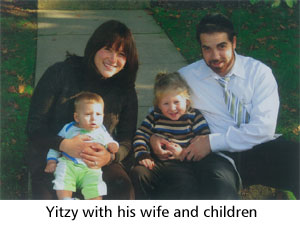 As an adolescent, Yitzy had to begin the arduous process of learning to walk anew, and even how to fall “right,” so he wouldn’t hurt himself. Through it all, he found ways to amuse himself and others. At Chai Lifeline’s Camp Simcha, a free two-week camp-extravaganza in the Catskills for kids with cancer, the mischievous Yitzy loved putting one over on his bunkmates. “I would say, ‘Whoever can put one foot on the floor and one foot on the ceiling at the same time is the head of the bunk,’” he recalls. “They’d all try it and fall over, and then I’d take off my prosthesis and touch the ceiling. I still use that one.”

I gave them hope and that gave me strength.

Yitzy spent five summers at Camp Simcha and eventually became a counselor, learning how much he actually had to offer others. “I had been on the taking side for so long, and it was an amazing feeling to finally be on the other side,” he says. “I knew from real-life experience the living nightmare these kids were going through. I could see that I really made a difference to them, and I gave them hope. And that gave me strength, too.”

As Yitzy grew into a strapping young man, he began thinking about marriage. His parents were concerned — would there be a woman who would accept him? But he never worried. “Maybe I was just naïve, but I never thought it would be an issue, and I had my share of dates. Then again, maybe no one wanted to be known as the girl who turned down the one-legged guy,” he says with a wink. Now married with two young children, his leg — or lack thereof — has never presented a problem. “My older son will say, ‘Daddy, put on your leg so we can play.’ They don’t have a point of reference for anything different.”

With the help of his parents, grandparents and others, Yitzy had finally built a full life for himself. But there was more tragedy to come. When he was 20, his mother, Deena Haber, whom he credits with keeping his family together during the worst of his crisis, became sick — with cancer. She had taught Yitzy to appreciate every moment, and now she lived that way throughout her own personal ordeal. One day, he came home from yeshiva and he found her eating a huge ice cream sundae, with sprinkles, chocolate syrup, even a cherry. “I asked her, ‘What’s the occasion?’ And she said, ‘It’s my year anniversary of still being alive.’ She meant it. She really celebrated her life.” After battling the illness for three years, Deena died a year after Yitzy’s wedding.

In many ways, the physical challenges of losing a leg to cancer have been simpler than the emotional. It can be tough relating to those who have never been through any kind of life-changing trauma. “When we first got married, sometimes it was hard for me to understand some of the things my wife got upset about,” he relates. “I didn’t see the big deal. Or when my friends were dating, and one would say that he wouldn’t go out with someone because she had red hair. I couldn’t believe how superficial people could be, how petty.” Many cancer survivors have a difficult time adapting to life after, and Yitzy is now involved with a new support group through Chai Lifeline, or, as he calls it, a “post-treatment-figure-things-out group.” He does what no social worker can — he offers a living example. “When someone is scared, and says to me, ‘How will I ever get married?’ or ‘How will I ever fit in?’ I encourage them; I show them it’s possible.”

Yitzy is relentlessly driven to awaken joy in others.

Yitzy is not only determined to nurture and cherish the joy in his own life, he is relentlessly driven to awaken that joy in others. Or, as he puts it, “to get a laugh or a smile, no matter what it takes.” And he’s not joking. He turned an interest in magic that he developed when he was sick, into a high school hobby entertaining at birthday parties, into a profession, and now works about 100 bar mitzvahs a year as a brightly clad “motivational dancer,” encouraging tweens (and otherwise lethargic adults) to get up and celebrate. He parlayed his innate charisma and physicality into doing exactly the thing that nourishes his body and spirit. 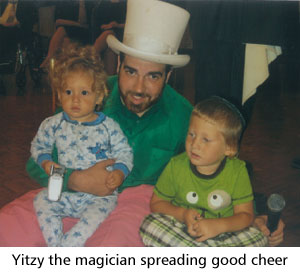 “I think all of us, if we look hard enough, can see the good in what happens to us,” says Yitzy, his ever-present smile momentarily fading. “I didn’t love throwing up, or the surgeries, or losing my leg — but if I had to do it all again to guarantee I’d be where I am now, I would do it. It’s not that I consciously think ‘I had cancer so now I’m going to appreciate life,’ but that is what I’ve internalized. I never asked ‘why me.’ It just was me, so now deal with it.

“I have a dream about building a giant, magic one-way mirror. Anyone who is upset about something small — their kid didn’t say please, or their house isn’t perfect — would look in the mirror and see a person like themselves whose life has been turned upside down due to illness or an accident. To make them see and appreciate how much they really have, and how things can change in an instant. If I had a dream, that would be it.”

Andrea Kahn is a former reporter for the Los Angeles Times and editor for TEEN magazine. She currently lives in New York, where she continues to freelance for a variety of publications.

At Death’s Door in a Foreign Land

My Family’s Life-Changing Summer in Israel
It Takes A Lot Of Faith To Be An Atheist
How Instagram Brought Back This Nostalgic Soup
What Makes Eli Run?
Comments
MOST POPULAR IN Spirituality
Our privacy policy