A Father who Cares 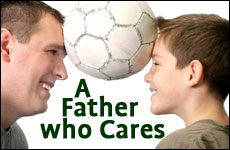 Even a grown man can be an orphan.

About a year after my grandfather passed away, I was having a rather heated discussion with my father. At some point my father told me that I have to be nice to him because he's an orphan.

"I'm an orphan," he responded.

"No you're not. An orphan is a small, defenseless child who's left alone in the world, bereft of parental protection. You're a grown man. Your youngest child is already in high school!"

Or so I thought – until recently.

Rabbi Margalios, my spiritual mentor, took me under his wing when I moved to Israel and has been an integral part of my life ever since. Last year, two days before the holiday of Shavuos, Rabbi Margalios’ father passed away in somewhat shocking fashion. He slipped, banged his head, and shortly after arriving at the hospital he was gone. Rabbi Margalios didn't even have a chance to say goodbye.

He didn't even have a chance to say goodbye.

Due to the impending onset of Shavuot the mourning period was short and very intense. I was there for virtually every minute of it, helping to organize for the throngs of visitors. I stayed there at night until the last visitor had left, helped clean up, and then escorted Rabbi Margalios home. Early the next morning I was back there and stayed for most of the day.

The weeks that followed were a real eye-opener for me. Rabbi Margalios is a great man; a "defenseless child, bereft of parental protection" he certainly is not.

This is why the intensity of his loss left me in shock. Yes, he ultimately grew from the experience. But the depth of his grief, the intensity of his pain, threw me. He seemed out of whack for a couple of months. And even as he came back to himself, his wit, charm and sense of humor, as they returned, were different. Not better or worse, but different.

Because he was now an orphan.

It made me think about my own father. And about his father, too.

A few weeks later, my father himself drove this message home to me. I don't think that was his intention. But our fathers teach us all the time, perhaps more often when they don't mean to.

You see, my father is a fundraiser by trade. For as long as I can remember, he's worked for various Jewish organizations, raising money for the cause. He's a professional, and quite proficient at what he does, so often people seek him out for guidance.

The synagogue I attend has been housed in a caravan for the past seven years. It's time to build a proper building, and much money must be raised. One of the movers and shakers of the shul asked me for my father's number so he could consult with him on how best to move forward.

A short while later I was speaking with my father on the phone. In the course of the conversation I asked if he had received the call regarding my shul, and he had. Curious, because sometimes he charges for this service and sometimes does it as a kindness for a good cause, I asked if he was taking any money from them. He answered casually, but his response hit me like a ton of bricks.

My father is an orphan because he doesn't have that father out there thinking about him all the time.

"I told them they wouldn't have to pay me anything. Whatever I would have charged them I asked that they deduct from what you owe to the building fund."

I thanked my father and he said it was his pleasure. We spoke for a few more minutes. It was after the conversation ended that I had a chance to think.

A father is someone who is always thinking about you, always looking out for you, always keeping you in mind. My father, despite being a grandfather many times over, and despite the fact that all his children are now married, and despite being a successful professional for over 30 years, is still an orphan, because he doesn't have that father out there thinking about him all the time. The same void exists in Rabbi Margalios' life.

My life is busy with all sorts of things. I study Torah, run youth programs, and have a growing private practice. And yet I find myself thinking about my children all the time. Rare is the day that passes that my wife and I don't discuss some aspect of our children's lives. Something – an anecdote, an area of growth, some concern about them or their behavior – inevitably comes up virtually every single day. They're my children. I'm their father. That's what fathers do. Care about their children.

And when I think about how my father still cares about me, it gives me a feeling of security that I can't possibly describe. Properly thanking my father I can't ever do. And the notion that I could somehow repay him is absurd. But as I grow, I have a greater appreciation for him than ever before. And I see more and more the crucial importance of having a father who cares.

Don't Miss Today!
Why Are The Prayers Of Yom Kipur So Repetetive?
Ha'azinu 5783: A Time for Unity!
Twisted Thinking
Comments