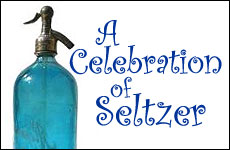 Who remembers the days when we drank seltzer? It’s time to return to the good old days!

Old Mr. Goldstein fell on a Brooklyn street in August, 1955. A doctor ran over, checked his pulse and said: “It’s the heat! Get water!” Goldstein weakly looked up and murmured, “Could you make that seltzer?”

Okay, true. The issue of old-fashioned seltzer with the shpritz bottles may not rise to the level of peace in the Middle East. But, for those of us who are older than the stuff in my fridge, seltzer – the real stuff -- was part of our Jewish heritage, now lost in the plethora of “designer” bottled water that, according to my research, may be the root cause of everything from depression to E.coli.

Nothing else could deliver that kind of raw Jewish mojo.

If you’re thinking “modern” seltzer in those plastic thingies, or worse, club soda or mineral water (with their salt and minerals to tone it down) mein kinder, it doesn’t compare! Only a meshugener would compare champagne to “swamp” water (even if it’s French at five bucks an ounce).

In the 1950s, every week, Tim, “The Seltzer Man,” would deliver the ubiquitous elixir in slatted wooden cases containing heavy clear or colored glass siphoned bottles that occupied a special place in our basement.

Seltzer! The real stuff was a unique sensory experience from the pouring to the kishkes. Maybe it was the shpritzing, but those CO2 sorcerous-sounding fizzies attacked your tongue like shards of bubbling ice, moved up to clear out your sinuses, then down to clean out your colon. Believe me. No plastic container could deliver that kind of raw Jewish mojo.

Back then, New York Jews could go local and order “Two Cents Plain.” For an extra penny they could get the Prince of Drinks – an egg cream! This legendary “Yiddishe” confection, created on the Lower East Side in the 1890s, consisted of real seltzer, milk, and Fox’s chocolate syrup (no egg!) and was served up at every Jewish candy or drug store. The “fency” restaurants shpritzed from etched bottles (which, if you were smart and saved them you could now make a killing on the Antique Roadshow).

Bubbe adored seltzer! OK, true. Sometimes you got a dud. You’d squeeze the metal “handl” as she called it, and bupkes. One in five pooped after a single hopeful stream. I spent many an hour hearing her kvetch: “Another shpritz! Oy, es gait nit. Doesn’t voik, and AND YES, I’M SKVEEZING DE SHPRITZER HENDL!”

Poor Bubbe. The Empress of Leftovers would save half-filled glasses of seltzer. She mastered running from the Czar, but why carbon dioxide went pffft leaving us with five “hef glasses” of water in the fridge, remained a mystery. Until her dying day she “vondered vere” the bubblies went.

In our home, seltzer was known to be the potable chicken soup, capable of preventing, soothing, and curing anything that could/should/might ail you. In my house if chicken soup didn’t do the trick Bubbe yelled, “Give ’em some fizzies! Hey, it vouldn’t hoit!”

Actually, the name “Seltzer” (called “seltser”) came from the German town of Niederselters. In 1772, scientist Joseph Priestly who “sniffed” out oxygen, wrote it could prevent scurvy. So, the next year Jacob Schweppes (yes, that Schweppes) of London, produced and sold this medical marvel. “Seltser” not only rid one of “feverish ailments and biliousness,” but could cure nervous affections brought on by “much speaking– or dancing.” Dr. Philip Syng Physick introduced the artificial carbonated water to America in 1807 for relief of gastric disorders (Do you remember when your bubbe called a laxative a “physic?” OK mine did). Well, Philadelphia pharmacist Townsend Speakman supplied his patients with a glass daily, and at $1.50 per month, no Philadelphian would belch. Even The New York Times, in an 1835 ad touted the elixir for “travelers as the only sure preventative against the influence of a hostile climate.”

As for the egg cream? Mel Brooks described its curative powers in a 1975 interview. When one of his childhood friends was hurt playing ball, he would scream, “Bring an egg cream!” An egg cream, Brooks described, “can do anything … Psychologically, it is the opposite of circumcision. It pleasurably reaffirms your Jewishness.”

So yes, it was We Jews who “Jewish-ized “Seltser” in the U.S. in the late 1800s, giving it the Yiddish name “seltzer” or “two cents plain” which became the title of Harry Golden’s 1958 book on growing up poor in the early 1900s. The entire Lower East Side was “addicted to seltzer,” wrote Golden. At least 73 soda fountains could be found in a one-third square mile area by 1900.

And we believed those sharp bubblies alone saved us from everything from shmaltz-induced acid reflux to Zayde’s prune juice stain on the carpet. After all, the Madison Avenue folks decided to call it Alka-Seltzer for a reason…

Imagine the beloved Bozo, Clarabelle, and every other clown flinging Aquafina at people? See? Not funny. The whole circus industry would be eckveldt (fall off the Earth)!

And of course, if the clown were Jewish, it made a handy-dandy fire extinguisher, should, heaven forbid, his cholent go up in flames!

Perhaps it was said best in this excerpt from a classic episode of the Mary Tyler Moore Show, “Chuckles the Clown Bites the Dust” (October 25, 1975.). Poor Chuckles, Grand Marshall of a parade, dressed as “Peter Peanut,” was fatally wounded when “shelled” by a rogue elephant. At the funeral, he was eulogized with the following words:

"Chuckles the Clown brought pleasure to millions. And what did Chuckles ask in return? Not much. In his own words, 'A little song, a little dance, a little seltzer down your pants.'"

So what happened to this miracle siphoned drink in the re-usable heavy glass that held up to 44 ounces and could withstand pressures of 200 pounds per square inch (necessary to avoid nasty explosions)? WW II shut down the (mostly) Czech and U.S. bottle business. But of course, flavored sodas for fountains and homes “flattened” the seltzer biz.

I say Jewish boomers unite! Forget the “fency” waters, the mineral springs, and the French fizzies. Say “no” to those drinks that are filled with “who-knows-what.” It’s time to get back to our roots with some of that old time religion -- seltzer!

Why I Love Telling Jokes at Orthodox Synagogues