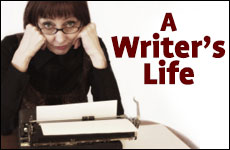 What’s it like to be a writer of Jewish humor? Marnie Macauley tells all.

Picture it. I’m at a large party in New York at Sid’s, an acquaintance, and a stranger approaches. After the “how amazing it is we both know Sid,” and another 3,000 words on this “awesome coincidence” we come around to “so, what do you do?”

“Oh? Have you written anything I might know?” he asks.

“Different things …” then reel off a few, including Jewish humor, and a TV soap.

“Frankly, there’s no such thing as ‘Jewish’ humor,” he retorts.

“Frankly, there’s no such thing as ‘Jewish’ humor.”

Whether he’s a terrorist or a professor of PC, I’m thinking “Please God … let there be a flood right now in Sid’s living room.” I say, however: “Well, that’s a matter of opinion. I must try those mini meatballs, enjoy!” and take off like the Roadrunner.

Picture it. Similar scene with new machatanim and their friends.

“So, what show did you write?” ask some friends of a new in-law’s brother.

“A daytime drama; As the World Turns.”

HIS FRIEND ONE: “You know, my daughter just wrote a Freshman paper … a retrospective on ‘Behind The Three Stooges’ at N.Y.U. She’d be great at that!”

HIS FRIEND THREE: “I know all about it. I did insurance for a soap once.”

And here, the food was chaloshes. Food or “them?” I vote for the slightly off chopped liver, which hopefully will cause such an internal uproar, I’ll get food poisoning and can run (literally) out of there.

Picture it. I’m speaking with a former IRS agent at a networking event.

“So, you write humor,” he says, deadpan. “People think I’m so hysterical I should write,” he adds,” expressionless. I’m dying to ask this man who sounds more like Karl Marx than Groucho to “say something funny” (which is a death knell to a humorist, comic and should never be said unless you’re both on death row). Instead I say, “I see you more as … a stand-up” (Hey I deserve a little fun).

I then meet a “hip” mom of three who’s been keeping a journal of “Good Things”--and wants me to partner her on making it into a best-seller. “Good what things?” I ask this woman whose experience consists of rhyming shopping lists. “You know, just…good things. Where can I send you the journal? It’s 2,000 pages. “And,” she adds, as if she’s just offered me the head writer job on Mad Men, “I will split the royalties! But, hey, you and I need a contract. You could steal this idea!” I wanted to say, “Honey, you could put it on Facebook, and not only won’t anyone ‘steal’ it, they’ll Unfriend you.”

For some reason, when you tell people you’re a writer one third need to assure you it’s no big deal. After all, virtually everybody can write – something – so anyone with a computer, an opinion, who’s ever told a joke, thinks he’s Seinfeld.

One third think you’re a genius, a celebrity who’s gone where mortal fingers rarely go, and you become their go-to person when they want to impress their friends.

The final third are the Hemingways-on-becoming, who believe we’d be thrilled to edit and partner on their tomes. Yesterday on a bank line, some guy told me he wrote a book on hypnosis. I asked if it had been published. No. I ventured forth. “So, you’re a trained hypnotist.” No. “I learned it from the school of life.” Then he walked off in a huff.

The truth is, we writers are neither Superman nor “everyman.”

Mostly, we’re hungry with a strong affinity for doggie bags. We’re also odd enough to observe the doughnut holes of life – and have worked hard to hone the skill and passion to share them with our readers.

So to set the writers’ record straight …

*See life’s quirks. I recently saw a sign in the supermarket at the express line that read: “ABOUT 10 ITEMS.” I thought that was a riot and could turn it into 6 paragraphs. Not one other person around me thought it was funny. (Believe me I pointed it out.)

*Dress in Salvation Army chic. Who can write wearing a power suit? High heels? Clothes that aren’t two sizes too big? God forbid a belt should strangle the blood flow to our brain.

*Have internalized “Costanza” (Seinfeld). I’m turning him into a condition. “Is this good? Am I good? Is it too long, too short? Will an editor like me, really like me? (A nod to Sally Field). Am I blocked? Will I ever get unblocked? Maybe I’ll never find work again? Am I dying from that mosquito bite and miss my shot at the Emmys?” And finally, “Am I dying … from anything?”

*Are workaholics. We work hard and long. Our homes are a sea of matchbook covers, napkins, and torn envelopes, filled with: “Ideas.” A Jewish writer creates an extra “sin” – cleaning up! My son thinks it is. “Thou shall never touch my parent’s shmutz with writing on it.”

*Are mired in criticism and rejection, and only need three egg creams to emotionally survive to write another day. Unless you’re JK Rowling, every writer gets tossed, turned, traumatized, and worse, ignored. To survive, we’re more determined than a dog in a Hebrew National factory, staying pessimistically optimistic. Despite all, we cling to hope, as we’re in more denial than Lindsay Lohan. “My next project could make millions! (OK … maybe it will pay the rent).”

* We’re in passion with the trying, the feel of the keyboard, the promise of a blank page. Yes, we’re different, but there’s nothing easy or exalted about writing. It’s not like loving a mate, or God forbid losing a loved one. It’s … just writing. As my late husband, a former Senior New York Times editor used to define it in his matter-of-fact way: “You’re a writer if somebody pays you.”

The next time someone asks me what I do, I might go with “actuary.” Making buttons is nice too. Then again, I could just show them this article.

The Mystery of the Kosher Lamp