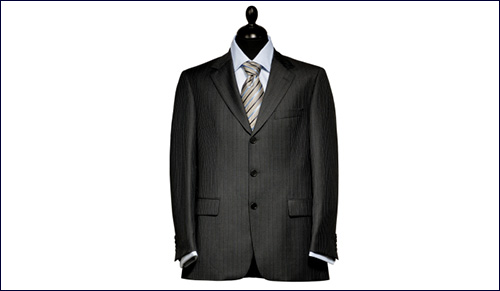 If I would have known what a pain it would be to find clothes to wear to my wife’s brother’s wedding, I never would have sent in the reply card.

If I would have known what a pain it would be to find clothes to wear to my wife’s brother’s wedding, I probably never would have sent in the reply card. Any repercussions would have been worth it.

I’m not even talking about going to the store to buy suits for my boys. I understood this needed to happen. I have 3 little boys, and none of them really had suits. It’s just that in general, they don’t go to a whole lot of business meetings. Sure, there’s always Shabbos, but the last thing we want is to get them a suit and a jacket that are both “dry-clean only” to wear on the most food-intensive day of the week.

“Come back to the table! You didn’t finish your cholent!”

There are no Jewish foods that don’t make you dirty.

There are no Jewish foods that don’t make you dirty.

But apparently, shopping for a wedding is way more complicated than just chasing three small boys around a clothing store.

Firstly, there’s women’s clothing, which apparently is partially my problem now. When I was a kid, my mother always handled that part without involving me even a little. But apparently, I didn’t marry my mother. I married my wife, who wears what I’d consider nice dresses every Shabbos, yet she informed me several weddings ago that if a woman is related to the bride or groom, she’s supposed to wear a gown, which is like a dress, only more expensive. Until my wife told me this, I had no idea there was a difference between gowns and dresses. Honestly, I thought they were interchangeable words.

But apparently, unlike a guy, a woman can’t wear the same outfit to her wedding as she can to Shul on Shabbos as she can to a job interview. No matter how nice it is.

In fact, the only places you can wear gowns, are to:

And even then, you can only wear one at all if you’re:

People are very snooty about this. Also, you can’t, for example, wear a hospital gown to a wedding. That’s not how it works.

I think that’s ridiculous. When a guy buys a suit, he gets to wear it, not just to his own wedding, but to every wedding he goes to, as well as every Shabbos, as well as any event he’s going to go to where his sweatpants won’t cut it. No one looks at him and goes, “Um, Didn’t you wear that suit to your brother’s wedding?”

“Well, that’s embarrassing. I didn’t think anyone would notice.”

So women need to wear an outfit that is way fancier than anything they actually own, and they can only wear it once. Because apparently, every wedding has its own color scheme, which may or may not have anything to do with what color the place settings are going to be. Someone will decide that everyone in the wedding party (which is not the same as the wedding itself, even though that’s also a party) has to wear a certain color, so that everyone knows they’re related.

When I was growing up, one thing my mother did teach me was that my clothes had to match. My socks had to be the same color as each other, and my shirt and pants had to look like they belonged to the same person. But what is this about matching everyone else in the room? We’re not furniture.

What is this about matching everyone else in the room? We’re not furniture.

And yes, I know that sometimes people buy matching clothes for their kids to wear in public, but that’s so they can find their kids in a crowd. They regret it as soon as they realize that they don’t know which kid is which from behind unless they’re all standing in a row. So is this so you can find everyone in your wedding party if you all decide to go to the zoo?

Is it in case some of them walk down the aisle? They’re not all walking down at once. Though that would definitely speed things up.

Supposedly, though, it’s for pictures – so that instead of looking like a picture of a bunch of people in various-colored outfits, it can look like a picture of a giant monochrome monster with way too many heads. If anything, it makes it harder to look through pictures.

Pictures are everyone’s least favorite part of the wedding anyway. You stop everyone from having a good time and call them into a room so you can capture forever what is literally the worst moment of the party.

I could see the color thing being a big deal if your relatives are the type who, left to their own devices, would show up in overalls.

I actually thought the color thing wouldn’t affect me, though, as a guy. I’m wearing a black suit, as are my boys. We’re matching, but not on purpose. But then I found out that the ties that my sons and I wear are technically supposed to match the dresses too. Because in the widescreen wedding picture taken from 50 feet away, people are going to see the inch and a half of necktie between my head and the head of whoever’s standing in front of me. I can technically buy one tie, cut it into pieces, make little knots, and give them to everyone.

And we still have to figure out shoes. My 4-year-old’s been missing his left Shabbos shoe for about two months now. We have no idea where it is, and we’ve been tearing the house apart. By this point, I’ve decided that it’s definitely not under anything, so it has to be in something. We don’t want to buy him a new pair until he outgrows his current ones, and we’ll never know when that happens, because it’s not like he’s periodically trying on the one he has. But we have to find his other shoe, AND it has to match the first one, because we all know how important it is for things to match at this wedding, apparently. Especially since he’s walking down the aisle with his sister. In the meantime, he’s been wearing his school sneakers every Shabbos.

The ironic thing is that his sneakers match the color scheme. Hmm…

Purim: You Are Who You Eat
Big OnThe Little Things
Chraime Egg Boil
Is Grease the Word?
Comments