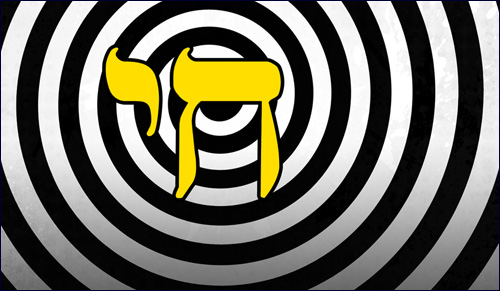 A Jewish event planner hankers for Chanukah to last an entire year so she can throw lots of festive parties. And it does…

“You are traveling through another dimension, a dimension not only of sight and sound but of (delicious) smells and (boastful) kvells. A journey into a neurotic land whose boundaries are not limited by schlepping or shmoozing. That’s the signpost up ahead (Can you see it hung at a slant in the right-hand side of the upper 1/3 of the doorframe?) Your next stop . . . The ChaiLight Zone!”

Maybe you’ve heard that several Rabbis have jumped on board a project to update and revamp The Twilight Zone with a Jewish theme. Actually you probably haven’t heard this since I just made it up right now. But here are a few more introductions to some new episodes whose plots might seem vaguely familiar to you.

The One Where Rumors Fly

“Submitted for your approval: The case of one Dr. Jeffrey Greenberg, a big macher surgeon who likes to gossip about his patients, until today when he’s ordered to operate on a pillow and remove all its fluffy down feathers. Scalpel still in hand, he watches as the sterile room suddenly fills with thousands of fuzzy plumes swirling in all directions, many drifting into the hospital corridor and out through the open windows. One quill even manages to land inside a patient’s open chest cavity just before getting stitched up after quadruple bypass surgery. Oy vey. In just a moment you’ll meet the Prophet Elijah who advises the good doctor to attempt to retrieve every single solitary last feather. A grim prognosis and an impossible antidote? Perhaps. But just one of the many lessons to be learned in . . . The ChaiLight Zone.

The One Where They Almost Moved To a Larger Hovel

Meet Mr. Ephraim Ben-Meir and his wife Rivka, an ambitious young couple inhabiting a modestly constructed dwelling on a tiny farm. Nothing is as it appears to be after an ancient mystical Rabbi is summoned to listen to their household kvetching. A word to the wise about simple solutions from Torah scholars – once horses, chickens, goats, cows, ducks, and roosters are carried into an abode, (And even if pigs are not invited and they should NEVER be!) “Home Sweet Home” will never smell that sweet again. Yet once the animals are returned to their barn, the square footage will seem to increase miraculously. Because that you see, is the special power of the Chassidic teachings Mr. and Mrs. Ben-Meir will find rampant in… The ChaiLight Zone.

And of course, some beloved classic Twilight Zone episodes are just too good to change, so they will only be modified in ways we endearingly recognize as totally mashuga.

The Eye of the Bubula Beholder

A young wanna-be female entertainer shown only with her face bandaged has undergone rhinoplasty to try and make the angle and size of her nose more appealing. When the plastic surgeon’s handiwork is finally unveiled, everyone gasps in horror because the bridge is still considerably petite and adorably upturned. But when the woman belts out “The Way We Were,” she goes on to achieve immediate fame and respect anyhow.

An orthodox airline passenger is convinced there is a golem on the exterior of the plane. He doesn’t fear the golem is trying to wreak havoc on the overbooked aircraft, but rather instead, it’s trying to bake a challah using the fiery wing as an oven. And of course, that’s simply not kosher.

Time Enough At Last For Simchas

Instead of the obsessed bookworm in a library who yearns for more time to read, but then ironically his glasses break so then he can’t see a thing – we now have a Jewish event planner who hankers for Chanukah to last an entire year, so she can throw lots of festive parties. Her wish comes true when she finds miraculously a batch of oil that burns the menorah for 365 days. However her glasses break too. That’s right, her entire set of wine glasses. And what kind of freilich shindig can you have without pouring lots of Manischewitz concord grape? Nu?