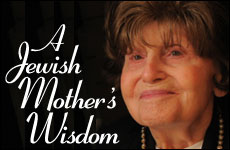 Atop the Mount of Olives, late on a summer afternoon, a Jewish mother was laid to rest.

It was Friday, and sunset, heralding the arrival of the Shabbat Queen, was imminent. But that couldn't deter the hundred or so participants from paying tribute to a woman who, through a life of quiet nobility, faith and wisdom, had profoundly influenced – even transformed - the lives of untold thousands, the overwhelming majority of whom would never have the privilege of meeting her.

“The typical Jewish mother” is often the butt of cynical jokes. But Mrs. Chana Berkovits personified the authentic Jewish mother in all her glory: Wisdom, passion, fortitude, kindness, guidance, and above all, a deep, unshakable faith in the Creator of the universe. A faith that accompanied her through her months in Auschwitz - where her own mother and three of her four siblings perished – and emerged intact, together with her optimism, zest for life, and love of God.

Her faith emerged from Auschwitz intact, together with her optimism, zest for life, and love of God.

King Solomon may have been the wisest of all men, but even his wisdom was shaped by a powerful force in his life – his mother (Proverbs 31:10). And it was King Solomon who would go on to exhort each Jew, “Listen, my son, to the Torah of your mother…” (Proverbs, 1:8).

Rabbi Yitzchak Berkovits, only son of Chana and Aryeh Leib Berkovits, is a well-known and beloved leader in the world of Jewish education and outreach. Rabbi Berkovits taught and ordained hundreds of students in Aish HaTorah over a period of sixteen years, after which he established an independent institution that trains rabbis and other Torah educators who go on to serve in various capacities around the world. Sitting in his modest apartment in the Jerusalem neighborhood of Sanhedria Hamurchevet, where he leads the English-speaking community, Rabbi Berkovits, alongside his father, reflected upon his mother’s life and legacy – the Torah of his mother.

For Rabbi Berkovits’ legion of students, whose very lives have been reshaped by his teachings, the legacy is uncannily familiar. 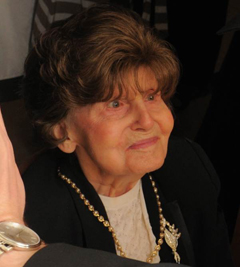 For Mrs. Chana Berkovits, being a Jew meant using one’s brain. “Why do people do things that don’t make sense?” she would wonder. Judaism, for her, was not about blind faith, about clinging to ancient tradition for tradition’s sake. It meant, instead, absorbing Divine wisdom, to the point that one’s actions would then express that wisdom.

She believed in God because it made so much sense, as much sense as anything could ever make.

Finding herself working as a book-keeper under a Chinese Protestant minister, she got herself a copy of the New Testament, pored over it and then debated her boss – who eventually gave up and admitted he was no match for her relentless scrutiny.

There was no formal Jewish education for girls in Mrs. Berkovits’ native Czechoslovakia, but the quest for knowledge and understanding of truth was built into her very being. After a long day at her full-time job, followed by hours of cooking and cleaning at home, she would sit down late at night with her beloved books - classics of Jewish thought and belief. Her favorite was the eleventh-century classic on faith, love and reverence of God, Duties of the Heart, read in English translation (at that point she did not yet know Hebrew, although she was fluent in several European languages). Even Maimonides’ Guide To the Perplexed, a work challenging enough for the most accomplished of scholars, was not beyond her purview; her son remembers being taught seminal passages from that work at a young age.

To her mind, the highest form of Divine service a Jew could engage in was the study of Torah, imbibing and integrating the Divine wisdom. Rabbi Berkovits remembers, as a teenager, when his mother insisted on polishing his shoes. “You study Torah!” she explained – and this was reason enough for her to show her own son this honor.

Mitzvot, the commandments, were for her not mere ancient traditions but expressions of spiritual truths. “Do you realize what you’re doing?” she asked her pre-bar-mitzvah son as he practiced winding the Tefillin straps around his arm and head. “You’re binding yourself to the Name of God!”

“With strength she girds her loins, and invigorates her arms…”

Mrs. Berkowitz was endowed with an ironclad sense of confidence, afraid of no one and nothing. Her confidence had nothing whatsoever to do with arrogance. It was a confidence born of her crystal-clear perception of God as an ever-present reality in her life, just as real – even more real – as anything else. She knew what was right, knew that God would see her through doing the right thing, and had no qualms about it, whatsoever.

“Growing up,” says Rabbi Berkowitz, “God was just a part of the family. She would talk about Him incessantly; His presence was tangible.”

In occupied Czechoslovakia a curfew was imposed. Young Chana’s brothers ignored it, leaving the house to study Torah. One night, one brother didn’t come home. He had been taken by the S.S.

The next morning, 19-year-old Chana made her way to S.S. headquarters. No one knows what she said, but she somehow convinced the Nazi officials to free her younger brother.

“Were you afraid?” she later asked him.

Throughout her 90 years, she conducted herself with a sense of dignity, even nobility. Nothing could ruffle her; she was always calm, even during an emergency. Even her passing was marked by a calmness which, the doctor present noted, was rare.

“False is vanity and vapid is beauty…”

It was always eminently clear in Mrs. Berkovits’ household that the material things in life were but a means to an end. This is not to say that the physical side of things was neglected. To the contrary: the quintessential Hungarian balabusta (homemaker), her meals were always elaborate, her home always spotless. But her every action bespoke a preoccupation with matters infinitely more meaningful than renovating the house or adopting the latest fashions, things acquaintances and neighbors devoted lots of time and thought to. “We always knew our family was different,” reminisces Rabbi Berkovits.

“Her husband’s heart relies upon her…”

Mr. Aryeh Leib Berkovits (then Tzimetbaum) was the youngest of seven children. He somehow managed to escape the Nazi inferno and spent the war years in the mountains of Romania, wearing the same change of clothing for years and scrounging for food. Auschwitz claimed the lives of his parents and siblings, along with their spouses and children. After the war, he remembers, he was in a state of despair and couldn’t imagine how he would go on with life. He met the woman who would become his wife at the home of a mutual relative. Young Chana approached him and said, “You are an orphan and have no one to take care of you. Let us get married and I will care for you,” which she did for decades until, because of her infirmity, the tables turned and her husband devotedly cared for her for the last years of her life.

“She envisions a field and buys it…”

For Mrs. Chana Berkovits, the only real home for a Jew was the land of Israel. Love of Israel was ingrained in her, and her children grew up with the knowledge that their sojourn in the United States was just that – a sojourn.

She returned home and “informed” her husband that they would be moving to Israel.

In 1975, just as the Israeli economy was taking a downward turn and many immigrants were leaving the country, she paid a visit to the land of Israel. On the last night of her trip, she signed on an apartment. Then she returned home and “informed” her husband that they would be moving to Israel…

“Her children arise and praise her…”

Rabbi Berkovits, who has spent time with some of the finest Jewish minds, the most saintly of Jewish leaders and scholars of the present as well as the previous generations, remarked: “I have never met anyone like her.”

“My mother taught me everything I know,” asserts Rabbi Berkovits. And indeed, her timeless lessons have been passed on to the hundreds, if not thousands, of her son’s disciples, who continue to pass those lessons on to their own students and families. And in her own family, her legacy lives on through her children, grandchildren and now great-grandchildren.

Rabbi Binyamin Feldman studies, teaches and writes in Jerusalem, where he lives with his wife and children.