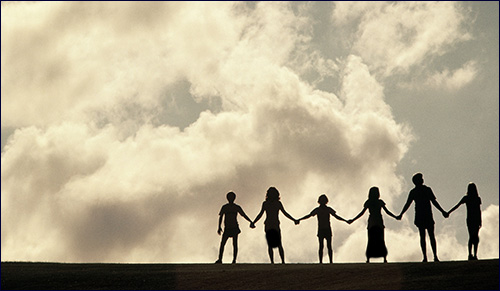 If you want God to treat you as His child, you must treat other people as your brothers and sisters.

On Rosh Hashanah, lowly man is called upon to participate in the coronation of the King of Kings, God Almighty. The very fact that we are permitted to participate in this momentous event uplifts us and gives us a sense of significance and purpose which, it is hoped, will propel us to new spiritual heights. As we recognize God’s dominion over us, we are called upon to live up to the capabilities with which we are endowed, by virtue of the image of God within each and every one of us. Nonetheless, at the end of the day, we are but servants of God. Despite the aura of importance Rosh Hashanah gives us, the chasm between man and God remains unfathomable and unchanging. Although we participate in the coronation, we are so far beneath the King that our declarations almost seem absurd.

This coronation ceremony reaches its climax as we blow the shofar. At that moment, we declare and accept God’s kingship. How strange, then, is the prayer we utter at that very moment, as the echo of the shofar blast hangs in the air:

Today is the birthday of the world. Today all creatures of the world are judged, whether as children or as servants. If as children, be merciful with us as a father has mercy on his children. If as servants, we beseech You with our eyes, until You will be gracious to us and bring to light our verdict, O awesome and holy God.

Rather than accepting our lot as servants of God, we entertain the possibility that we might enjoy a special relationship with the Almighty. The same idea is articulated in another central prayer of the Days of Awe, Avinu Malkenu (“our Father, our King”). We know – cognitively, logically – that we are but servants, yet we beseech God to think of us as His children. We pray, even beg, for God to relate to us as a loving, nurturing, forgiving parent, and not as the master of undeserving slaves.

The difference between these two relationships is far-reaching, because the nature of our relationship with God lies at the very heart of our religious life and informs every aspect of our personal and national existence. This is best illustrated by a debate, recorded in the Talmud, between the great Rabbi Akiva and a Roman dignitary.

This question was actually put by Turnus Rufus to R. Akiva: ‘If your God loves the poor, why does He not support them?’ He replied, ‘So that we may be saved through them from the punishment of Hell.’ ‘On the contrary,’ said the other, ‘it is this which condemns you to Hell. I will illustrate by a parable. Suppose an earthly king was angry with his servant and put him in prison and ordered that he should be given no food or drink, and a man went and gave him food and drink. If the king heard, would he not be angry with him? And you are called "servants", as it is written, ‘For unto me the children of Israel are servants.’ (Bava Batra 10a)

The Roman prefect argued that by helping the poor, man defies God who had sentenced them to a life of poverty.

R. Akiva answered him: ‘I will illustrate by another parable. Suppose an earthly king was angry with his son, and put him in prison and ordered that no food or drink should be given to him, and someone went and gave him food and drink. If the king heard of it, would he not send him a present? And we are called "sons’, as it is written, ‘You are sons of the Almighty God.’ (Bava Batra 10a)

The crux of the argument is as follows: Turnus Rufus, the Roman general, saw his servants – and, by extension, all of mankind – in terms of the hierarchy of power. All of us, according to this view, are but servants to the powerful. Rabbi Akiva saw the nature of the relationship between God and man in a completely different light. Rabbi Akiva saw mankind as children of God, not simply as servants.

But what is it that makes us children of God? The answer is as simple as it is profound: If you want God to treat you as His child, you must treat other people as your brothers and sisters.

Our differences melted away. For the first time in a long time, we felt that we are truly one people.

This past year the people of Israel suffered horrific trauma, yet as the news of kidnapping, death and war spread, the response was heroic. Something special happened: An entire nation, a nation not limited by geography, felt as if those three boys were their own sons or brothers. As our soldiers made their way to the border and into Gaza, an entire nation poured out so much love and care and empathy that here in Israel we felt an almost seismic vibration beneath our feet. Our differences melted away; petty political positions seemed trite. For the first time in a long time, we felt that we are truly one people, of one heart. We were able to feel the heartbeat of this beautiful collective. All of our hearts skipped a beat when the sirens wailed; all our hearts stopped for a moment with the tragic news that the bodies of the three martyrs were found. All our hearts shrank each time the death of another fallen soldier was announced.

And then there were the acts of kindness, the things that made our hearts swell and come back to life – gestures that seemed to border on the irrational. Gifts, letters of encouragement and gratitude, clothes, food and money came pouring in. Perfect strangers reached out to residents of the south, families hosted those whose homes were threatened, communities looked after the wives and children of the men who went to battle. In fact, none of this was irrational. It all made perfect sense: We felt that our brothers and sisters were in trouble, and when members of our family are vulnerable we step up to protect them. We feel empathy; we help them through times of stress and need. We feel their pain, and we shower them with love. This summer, we reminded ourselves what it means to be a family – a big, raucous, loud, beautiful family, made up of Sabras, immigrants and diaspora Jews, Sefaradim and Ashkenazim, white and black, ultra-orthodox and secular and everything in between. We were one.

And so, this year, when the shofar sounds, we can stand tall and proud as we coronate God as King as the Universe, and as we recite the prayer afterward, we can say – at least in our hearts: “Treat us as your children. This year, show us compassion, because we behaved like a compassionate, caring family. Show us kindness and love, in the merit of the kindness and love we showed one another. Behave toward us like a forgiving parent, because we have shown how much we care for our brothers and sisters.”

In the merit of everything we experienced together this past summer – the good and the bad, the sacrifice, the unity, the loss and the reaffirmation of commitment – may God write and seal the entire Jewish People in the book of life, and grant us a year of peace, health, happiness, love, prosperity and spiritual enlightenment. May He treat us with love, caring and affection, just as any father would treat their child.

Rosh Hashanah Dictionary
Why the Mezuzah is Placed on a Slant
Faith: the Axis Upon Which the Wheel of Science Turns
Love - Not Just About Chemicals Anymore!
Comments
MOST POPULAR IN Israel
Our privacy policy