A Candle for My Father 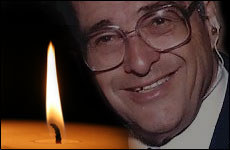 This Thursday night I will light the yartzeit memorial candle for my father, Jack Rosenfeld. It marks 20 years since he passed away on the Friday before Father's Day. 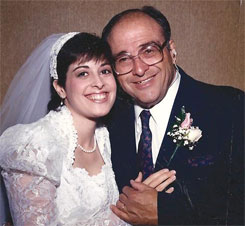 Dad and me at my wedding

Living with Dad was not easy. He was severely hard of hearing, and in those days, hearing aids weren't very effective. Feedback from his hearing aids often caused them to whistle loudly, which we heard but Dad didn't. It took patience to always look at Dad while speaking at a slower pace than normal so he could read our lips. He loved to watch TV, especially sports and any dramatic series involving detectives, mysteries or cowboys. We lived in a very small house, and with the volume way up, it was hard to concentrate on much else, so it behooved us all to also enjoy shows like "Columbo," "Murder, She Wrote," and "Bonanza."

His grief turned to anger, which could erupt seemingly for no reason.

Our family was devastated when my older brother, my parents' first-born and only son, Allan, died in a car accident on March 5, 1970. Allan had gone to visit our grandparents for our grandmother's birthday. In the face of such grief, Dad could barely cope. His grief turned to anger, sometimes explosive anger, which could erupt, seemingly for no reason. As a child of nine, I was often frightened and stayed in my room, waiting for the episode to pass. My mother spent a lot of time trying to calm Dad down, and waking him from nightmares.

In those days, therapy and support groups were only starting to become popular. Grief counseling probably would have done us all good, but I don't think my dad would have agreed to it. Touching those emotions and processing them was a place he couldn't go. While Dad had never been religious at all, after Allan died he refused to set foot in a synagogue, unless it was for a special occasion, such as my bat mitzvah or other celebrations.

His own father had been a defiant atheist, who had told me that he turned against God after his father died when he was a little boy, leaving his mother to raise their six children alone and nearly penniless. My father and his father were stubborn men, not prone to spiritual seeking.

I loved my Dad very much, and despite his emotional volatility, I knew he loved my mother, sister and me beyond measure. While we had to tread carefully around him, never knowing what might set off an angry outburst, I also felt sorry for him and did not judge him. His hearing loss had cut him off from most professional opportunities as well as much social intercourse. Losing Allan plunged him into a depression that lasted the rest of his life. My remarkable mother kept her own sorrow tamped down in a very private place so she could support my dad's emotional needs, as well as help support the family financially.

Over the years, Dad mellowed. When I married my husband, Jeff, and became more observant, Dad never uttered a word against it, and accepted our having an Orthodox wedding and lifestyle. In fact, Jeff and I were utterly stunned when Dad asked for everyone's attention during the Shabbat Kiddush at our shul the week after the wedding. Asking to speak publicly was completely unprecedented for him. I couldn't imagine what he wanted to say.

Holding my breath, I listened as Dad publicly expressed his admiration and appreciation for the warmth of this new-to-him community, a group of Orthodox Jews he had never met but who had celebrated his youngest daughter's wedding with unbridled happiness and exuberance. Dad felt their sincere warmth, and it brought tears to my eyes that he had been moved to express this appreciation in so public a manner. He was instantly surrounded by those shaking his hand, offering more mazal tov wishes, and embracing him.

When Dad was diagnosed with cancer that was already advanced, it was hard to be optimistic. Yet despite the emotional fragility that had overwhelmed his other qualities for so many years, Dad was able to tap into a spiritual reservoir I had never seen. He asked me to encourage Mom to remarry after he was gone. He gave me the list of pallbearers he wanted at his funeral. He spoke of these things philosophically, with no self-pity or tears. I had not known he had this inner strength, and it moved me.

Dad was able to tap into a spiritual reservoir I had never seen.

Sitting at his bedside at the hospital with my mother, I was also shocked to hear my father say that he hoped I would have a daughter. This, from the man who had recently questioned our family's rapid growth rate: three sons born in less than five years. My baby had just turned one. Dad must have known something I didn't know, because a few months later, I learned I was expecting again. Forty-eight hours later, I got the call that Dad had passed away.

The little girl he had dreamed of arrived on time nine months later, the only grandchild he did not meet. Lighting the yartzeit candle each year, I try not to focus on the pain in my dad's life but on his essential goodness, his scrupulous honesty, his love of family, and his sense of humor, corny though we often found it to be.

Dad may never have found peace here on Earth, but as I light a yartzeit candle now for the 20th year, I know there is peace to be found.

Passover: Days of Future Past

5 (Spiritual) Ways to Beat the Heat