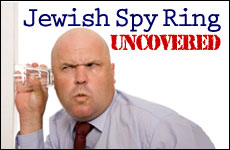 The FBI in their overzealousness claims to have unearthed a Jewish spy ring. But I have my doubts.

A Jewish Spy Ring? No, it’s not a bad dream, a Saturday Night Live sketch, or the latest rant from Mel Gibson. Unfortunately, it’s actually in the news. Due to the recent discovery and scandal of the Russian spy ring, the FBI has switched into its Overzealous Spy-Finding Mode.

As a result, the FBI’s little-known HEYJUDE (Hebrew Enemies Yiddish & Jewish Undercover Division Entrapment) unit has arrested 10 Jews who allegedly spied for the underground Zionist organization BLINTZ (Bringing Learned International Notes to Zion) for up to a decade – accusing them of posing as innocent workers and academics trying to infiltrate U.S. policymaking circles to “research” U.S. weapons, diplomatic strategy and political developments. Shocking political reverberations have been felt from Washington to Jerusalem and throughout the world.

Criminal complaints filed in Federal District Court in Manhattan read like an old-fashioned cold war thriller albeit with a Jewish twist: Spies swapping identical Manishevitz commemorative wine bags as they brushed past one another in a train station stairway. An identity borrowed from a dead mohel, forged passports, messages about the novels of Philip Roth sent by shortwave burst transmission or in invisible ink. A list of influential cantors, and their contact information, buried for years in a field in upstate New York.

I will prove the charges false, that those arrested aren’t even Jewish and demand an FBI apology.

I say relax. It’s not so. It’s trumped up. I will endeavor to prove the charges false, that those arrested are not even Jewish, demand an apology from the FBI, and then leave for a light brunch with my friend Jake.

And speaking of food, my research has revealed some inconsistencies with these “spies” being labeled Jewish. There was not one carton of Chinese take-out food in their garbage. That alone would rule out any Jewish involvement. I did find several Wonder Bread wrappers. Wonder Bread --the most goyishe starch on the planet! As if that weren’t enough, according to inside sources, throughout their capture, interrogation and incarceration, there was no sighing, whining or complaining. Does that sound Jewish to you?

There was no clue in the court papers unsealed recently about how successful the agents had been, but they were alleged to have been long-term, deep cover spies. How’s that for a red flag? Look at any list of desirable occupations for Jews. You’ll find doctors, dentists, attorneys, accountants, bankers, professors, writers, marketing specialists, and entertainers. You will seldom find traitors, secret agents or spies on such a list. And if Jews were on the list, you can bet they would have been successful. Because no Jew wants to go home and face the look on his or her parents’ faces when they hear that after ten long years, not even one spy promotion. Why did we pay all that money for spy college if you’re going to be stuck at the same spy level forever?

The FBI expressed surprise that these “spies” had eluded capture for 10 years, blended into American society so seamlessly, and were far from the James Bond image of professional secret agents. After all, two of them, Jacob and Shirley Feigenbaum, grew zucchini in a backyard garden, walked their daughters to the school bus each morning, and reportedly swapped Chanukah cards with neighbors who had moved to New Jersey. To all appearances, the Feigenbaums were a typical, child-obsessed Jewish American family — not deep-cover Jewish spies straight from a Cold War novel. Then again, how many decades did it take the FBI to determine that J. Edgar Hoover enjoyed wearing dresses?

Instead of car chases and shootouts, these “spies” paid taxes, attended PTA meetings, and lined up for the salad bar at Hometown Buffet. Okay, there’s another red flag – no Jew has ever eaten, or would ever eat, at a Hometown Buffet. When I realized that, I started thinking – Jewish spies? Hometown Buffet? Something’s not adding up.

The inconsistencies continued. The Montclair, N.J. neighbors of Jacob and Shirley Feigenbaum were flabbergasted when a team of F.B.I. agents turned up one night and led the couple away in handcuffs. “They had just baked a bundt cake for us.” One person who lives nearby called them “suburbia personified,” saying that they had asked people for advice about the local schools and best place to buy New York-style cheesecake. Others worried about the Feigenbaums’ elementary-age daughters. One neighbor said she could not believe the charges, especially against Mrs. Feigenbaum. “They couldn’t have been spies,” she said jokingly. “Look what she did with the hydrangeas.”

What is new about the network of illegals rolled up by the F.B.I. is the hi-tech methods they used to communicate with the supersecret Knesset’s National Israeli Spy Headquarters – or as it’s better known, KNISH. Old-fashioned dead drops — leaving documents in a drainpipe or under footbridges, as the American spies Aldrich Ames and Robert Hanssen did for their Soviet paymasters — are passé. These illegals used laptops and set up private wireless networks and JDate and Frumster accounts to communicate with Jewish officials parked in a van near a coffee shop on Eighth Avenue, a bookstore in Tribeca, a restaurant in Washington.

Then there’s blonde-haired Israeli sabra accused of being a deep-cover mole in the U.S. Her ex-husband describes her as, “A quiet low key woman who let me go about my business.” A quiet, low key unobtrusive blonde? Does that even sound like a Jewish wife to you? I rest my case.

Neighbors said the F.B.I. descended on the suspected house — 15 to 20 agents in black vans. The “Feigenbaums”, led out in handcuffs, were put in separate cars. Another red flag – a Jewish woman would insist upon riding in the same car with her husband. Still desperately trying to keep up the guise of being Jewish, however, the Feigenbaums requested “Seinfeld” DVDs for the back seat DVD player, as well as a bagel, lox and whitefish platter while they were being booked. They slipped up, however, in asking for a “smear” for their bagel, rather than a shmear.

I think it’s more than clear that these “Jewish spies” were not only not Jewish, but were no doubt probably not even spies. Just as the “Red Scare” of the 1950s turned out to be a lot of hooey, so this current spy nonsense serves mainly to distract us from what truly should be at the forefront of the news: the economy, the BP oil spill, and Lady Gaga’s latest video. So, if the FBI will simply do the right thing, admit its errors and apologize, the rest of us can get on with our lives and put all this ugliness behind us. And for the record, the only spying I plan to do is to spy if some fresh salmon has come in at my fish market. But first I have to write a letter of thanks to my research associate, Deep Matzoh Ball. He’s Deep Throat’s cousin.

Record 64 Pound Gefilte Fish Caught in Minnesota Lake
It Takes A Lot Of Faith To Be An Atheist
How Instagram Brought Back This Nostalgic Soup
What Makes Eli Run?
Comments
MOST POPULAR IN Jewlarious
Our privacy policy