The Jewish Ethicist: The Angry Manager 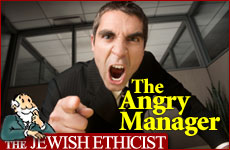 Is anger an acceptable tool for a manager?

Q. My manager shouts, curses and uses bad words to make staff do what he wants them to do. Is this an acceptable way to get the job done?

In order to answer this question, we have to study the special status anger has among human emotions in the Jewish tradition. We will start with the treatment of the topic in Maimonides' Code.

Maimonides first explains that all emotions and human traits have their place. We have spectrums of tendencies from anger to placidity; from conceitedness to extreme modesty ; from acquisitiveness to disdain of material possessions; miserliness to generosity, and so on.

At first, Maimonides makes a general claim: on all these spectra, the "middle way" is the best.

The two extremes distant one from the other in teach trait are not a good way, and it is not fitting for a person to go in them and to accustom himself to them. . . The straight path is the middle measure in each trait and trait, in all the traits a person has, and this is the trait which is equally far from each of the two extremes.

Specifically regarding anger, he writes:

For example, a person shouldn't be petulant and easy to anger, nor like a dead person who never feels, but rather intermediate: he shouldn't get angry except for a great matter worthy of being angry at, so that [the subject of the anger] shouldn't repeat what he did. (1)

However, in the next chapter Maimonides takes a slightly different tack. All traits may be equal regarding the need for the "middle way", but some are perhaps more equal than others.

There are some traits that a person is forbidden to conduct himself in the middle way, rather he should distance himself from them in the extreme. . . Anger is an extremely bad trait, and it is fitting that a person should distance himself from it to the extreme, and teach himself not to become angry even on something that is worth getting angry about. And if he wants to threaten his children or household, or on the public if he is a public leader and wants to get angry at them so that they should return to the proper path, he should show himself before them as if he is angry in order to make the sorry, while inwardly he maintains composure, as a person who feigns anger when he gets angry but is not really angry. The early sages said that anyone who becomes angry it is as if he worships idols, and they said that anyone who becomes angry if he is wise his wisdom departs from him, and if he is a prophet his prophecy departs from him, and those who are habitually angry their life is not a life, therefore they commanded that a person should distance himself from anger until he should accustom himself not to feel even the most infuriating things, and this is the good way. (2)

The Lechem Mishna commentary points out that in the second chapter Maimonides is referring to someone who has an extreme natural tendency. In that case, the usual cure is to proportionally exaggerate the opposite tendency. For example, it is proper to give charity in moderation. But a rather stingy person should overcome his tendency by being unusually generous, until he is able to restore himself to the middle path. Maimonides states that this advice does not apply for someone with an anger problem; it is not enough for that person to go in the middle way, rather he has to forgo anger entirely.

According to this explanation, an angry person is like an addict. An addict can seldom go back to enjoying his addiction in moderation; in most cases he must forswear it. At any rate, we see that anger is in the best instance a dangerous trait that should be indulged in moderation, and in many cases needs to be avoided altogether.

Either way, getting routinely angry at workers who don't meet the boss's expectations would be considered excessive. Missing a sales target or occasional neglect of a workplace norm would certainly not be considered a "great matter". Note also that in the second chapter, all the instances where Maimonides considers it legitimate to even feign anger are where the subject of the anger misbehaved and where the sanction of anger is intended for his own benefit – not that of the parent or leader.

According to the Jewish view of the proper character traits, it is not fitting that anger should be used or even feigned as a routine management technique.

Gregory R. Smith is an attorney in Los Angeles and a partner emeritus in the law firm of Irell & Manella.

The Jewish Ethicist: The Corporation and God

The Jewish Ethicist - Slander in Self-Defense

The Jewish Ethicist - Slander in the Court

The Jewish Ethicist: Scientist or Salesman?
Why the Mezuzah is Placed on a Slant
Faith: the Axis Upon Which the Wheel of Science Turns
Love - Not Just About Chemicals Anymore!
Comments
MOST POPULAR IN Current Issues
Our privacy policy