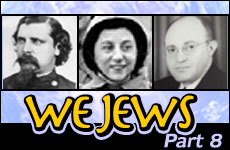 Last time, we looked at a few lesser known MOTs (Members of the Tribe) who played a fascinating role in U.S. history, through the end of the Civil War. In this piece, we’ll see a sampling of We Jews who helped re-build America afterward. For you “listers” out there, I end with a few fascinating bullets!

There were only two Anglo women in Tucson when Rosa Drachman arrived. Her son, Harry Arizona, was the first child born in Tucson to American parents (1869). Nine more followed. In 1889, her husband died, leaving Rosa to raise the children and continue running his saloon and cigar store. Ah, but she became Tucson’s first Jewish mama ... teaching, mentoring, and building the community. Rosa’s tombstone refers to her as “Mother Drachman,” to honor the great matriarch.

On October 20, 1944, Frances Y. Slanger, R.N., who was in the first nursing basic training program with the Army Nurse Corps, wrote the Stars and Stripes expressing her gratitude for the privilege of working with the wounded. Tragically, and ironically, the very next day, the 31-year-old Jewish woman became the first American nurse to be killed in Europe after D-Day (in Belgium during a German artillery attack). When her poignant letter was published after her death, Americans everywhere mourned. In June 1945, the Frances Y. Slanger set sail, returning the wounded from Europe. In 1947, over 1,000, including Boston’s mayor attended her re-burial in her hometown of Boston.

On February 19, 1945, the battle on Iwo Jima began. Among the 70,000 marines embroiled in the five week bloodbath, 1,500 were Jewish. One can’t think of Iwo Jima without recalling the most famous Pulitzer Prize winning WWII image taken by Jewish photographer Joe Rosenthal of the second flag-raising over Mount Suribachi. Less known is the remarkable eulogy by American Rabbi Roland B. Gittlesohn, following the battle, at the dedication of the Marine Cemetery. Rabbi Gittlesohn, the decorated first Jewish Marine chaplain, ministered to all faiths at Iwo Jima.

"Here are Protestants, Catholics, and Jews together ... Among these men there is no discrimination. No prejudices. No hatred. Theirs is the highest and purest democracy! ... To this , as our sacred duty, do we the living now dedicate ourselves: To the right of Protestants, Catholics, and Jews, of White men and Negroes alike, to enjoy the democracy for which all here paid the price. Out of this and from the suffering and sorrow of those who mourn this, will come the birth of a new freedom for the sons of men everywhere."

The words struck those of all faiths and were repeated and republished everywhere from Time magazine to the wire services. The sermon was inserted into the Congressional Record, and eulogy was broadcast to American troops around the world.

Lt. Col. Scott Rutter was looking for signs of ancient Babylonian Jewry in 2003.

He was interrupted. The Jewish Colonel and the “2-7" were busy capturing Saddam Hussein International Airport (which he renamed the Baghdad International Airport) during Operation Iraqi Freedom. He was rewarded with the Silver Star to keep his Bronze Star that he earned during the Gulf War, company.

No foolin’. The grandson of Lithuanian Jewish immigrants who settled in Philadelphia was Captain of the U.S.S Harry S. Truman! (2007-2010). Capt. Herman “Herm” Shelanski earned his Command after 30 years of naval service and what a command it was – including bringing “Jewish” on board. On the Truman, Shelanski has hosted kosher Seders for the crew, and attended Shabbat services in the ship's chapel. Jewish history took its place with a Lithuanian Torah aboard, saved from the Holocaust. The son of a doctor who served in the Navy during World War II, “Herm” made the Navy his career to “give back” to America. Though family members died in the Holocaust, immigration saved his grandparents from the same fate. He firmly believes that America’s strength is tied to Israel’s safety.

SOME FACTS ABOUT JEWISH OFFICERS

The following are some fascinating facts about Jews in the military:

- The first Jewish officers in the New World fought in the French and Indian Wars. They were Jacob Judah, Michael Isaacs, Isaac Moses and Isaac Meyers. Meyers led a company across the Allegheny Mountains and served as captain.

- The banking firm of Seligman Brothers provided financial support to the Union Army.

- When General Robert E. Lee surrendered to General Grant, present at the ceremony in 1865, was Benjamin B. Levy, one of a six (some sources say seven) Jews awarded the Congressional Medal of Honor.

- General L. C. Newman, of New York, fatally wounded during the Civil War, died – while President Lincoln, who appointed him Brevet Brigadier General, was at his bedside.

- Major General Frederick Kneffler, was noted for bravery at the Civil War Battle of Chickamauga.

- Sergeant Leo Karpeles, of the 11th New York (more than half composed of Jews) was the first Jew to receive Medal of Honor, issued in 1870 for heroism in the Battle of the Wilderness.

We Made Our Mark. Come Visit!

Across North America, Jewish place names dot our map. According to author David C. Gross, there are 92 towns, villages, hamlets, lakes, and forests in 34 states named for Jews who contributed mightily to these areas! Here are a just a few:

- Enjoy fishing? Levy Lake on Florida’s Gulf Coast was named for Moses Levy, whose son David, the first Jew elected to Congress as Florida’s Congressman-at-large in 1841.

- Into railroads? Weiner is a spot on the St. Louis Southwestern Railroad in Arkansas, named for a Jewish train official!