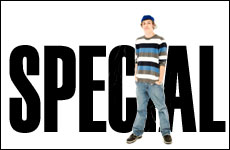 I’m special. My parents told me so ever since I was a little kid. Every time someone tried to stop my exceptionalism, my parents defended it vigorously because they know I’m special. Teachers have been fired for giving me bad grades, Little League coaches have been dismissed for trying to treat me like I’m not special.

Or rather, welcome to the world of an alarmingly high percentage of today's college students where 30% agree that if they show up to every class, they automatically deserve at least a B.

A recently published University of Michigan meta-analysis, presented in Boston at the annual meeting of the Association for Psychological Science, caught many by surprise. The combined results of 72 different studies, covering 14,000 American college students, conducted between 1979 and 2009, showed a 40% drop in empathy towards others, with the greatest drop coming in the last decade. People are less likely to try to see the viewpoint of anyone who doesn’t think like them, people are more likely to criticize those who don’t agree with them, and other people’s misfortunes don’t seem to affect the college students of today. Nearly 10 percent of 20-somethings have already experienced symptoms of narcissistic personality disorder, compared with just over 3 percent of the 65-and-over set.

But when the data is presented at college campuses, the over whelming response has been, “No kidding!”

In explaining the lack of empathy, one theory is that the proliferation of violence on TV has numbed people’s feelings for others. (By the time the average US teen turns 16, he has seen 20,000 people killed on TV or in movies.) Another theory states that the Facebook era, where people have hundreds of friends but very few real emotional connections, allows people to shut out another person’s feelings, and simply tune out when others are in need. It’s almost as if they just update their emotional status to “OMG! I’m out having ice cream at Stone Cold Creamery, and I LOOOOVE this place!!!! TTYL” and walk away.

Others contend that the Reality TV shows, where millions tune in to watch other people publicly humiliated by the likes of Simon Cowell, or people doggedly clawing each other to become the Bachelor, the Bachelorette, the Survivor, or America’s Next Top Model, desensitizes people to how we are supposed to relate to people in Reality Life.

The dominant theory regarding the rise in narcissism is that it is caused by the feeling of exceptionalism imbued in children by their parents from cradle to career. Children who constantly hear they are the best, the most wonderful, the most beautiful, the smartest, the sports star, The Super, The Mega, or even The Ultra, without it being linked to any real achievements, begin to really believe it and see themselves as the center of the universe.

"It's not surprising that this growing emphasis on the self is accompanied by a corresponding devaluation of others."

Parents will often fight with anybody, be it school faculty, sports coaches, camp directors or neighbors to get their child the edge they want. (I taught high school for ten years and can’t tell you how many times I’ve dealt with abusive, threatening parents demanding better grades for their children who missed classes, didn’t hand in work, or failed multiple tests.) Students are having tutors do their homework and experts writing their college essays, but when they get into a top-tier college, everyone tells them how great they are. If that doesn’t feed narcissistic insanity, I’m not sure what does.

"Many people see the current group of college students – sometimes called 'Generation Me' – as one of the most self-centered, narcissistic, competitive, confident and individualistic in recent history," says Sara Konrath, one of the researchers who published the study. Her colleague, Edward O’Brien, adds, "It's not surprising that this growing emphasis on the self is accompanied by a corresponding devaluation of others."

You Are the World

How does Judaism relate to the emphasis on self? Is Judaism pro-narcissism? And if not, how do we instill confidence without ego, individualism without self centeredness?

Judaism certainly doesn’t shy away from recognizing the power of the individual. The Mishna (Sanhedrin 4:5) famously states that, “One is required to say the ‘world was created for me.’” This statement speaks of the enormous importance each person has in Judaism, to the point that the entire creation would have been worthwhile even if that one individual was the only human created. Yet Judaism steers us away from the pitfall of narcissism and ego by posturing a person’s individual greatness as something that gives him awesome responsibility and not special rights or privileges.

The Talmud (Kiddushin 40b) says that one should try to see the entire world as if it is balanced exactly between good and bad, and his next action is going to be the one that tips the world into either direction. This perspective reminds us that our individual greatness is not just a gift, but a great responsibility, one that insures that we are only as great as the next decision we make. It's up to us to tip the world to the good; no one is going to do it for us. Living life with this construct is enormously empowering. It builds empathy, boosts compassion, and heightens people’s sensitivity to the effect of their actions on others.

Our individual greatness is not just a gift, but a great responsibility.

Recognizing just how many times we didn’t roll the world in the right direction humbles us, and keeps the narcissism at bay. But even if we’ve made multiple mistakes, the proper perspective is to view the whole world as standing on our next action. This gives us the confidence to get up after repeated failures and keep pushing, when many others would have had their egos bruised too badly and would have checked out.

By teaching us to believe that we can bring positive change to the world through selfless sacrifice and hard work, Judaism manages to show us our immense potential and greatness, through a healthy and empowering lens.

Yes, I'm special, because I'm responsible to make the rest of the world special too.

10 Ways to Get a Grip on Worry

Keep Your Eye on the Expert
Don’t Believe in Other Gods Versus God is One
Seeing Without Eyes
Why Shouldn’t We Eat Whatever We Want?
Comments
MOST POPULAR IN Spirituality
Our privacy policy
Aish.com Is Looking for Great Writers