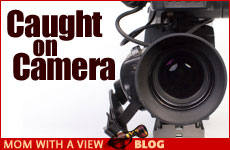 Everything you say is being recorded.

Mrs. Levine and Mrs. Goldstein were at a friend’s wedding. Chatting at their table, they commented on the bride’s dress (too much beading and too tight), the food (not worth the price, the chicken very dry) and the band (way too loud!). Unfortunately for them (and their hosts), the videographer was filming nearby. When the happy bride and groom sat down to watch their wedding video, every word of that conversation was replayed in front of them.

Mrs. Stein was sitting shiva. The house was constantly filled with family, friends and acquaintances dropping by to offer comfort. When the week ended, Mrs. Stein went to her jewelry case to retrieve her favorite diamond ring, a precious gift from her late husband. It was gone! But Mrs. Stein had a camera security system in her home. She was able to hear two visitors colluding on the theft and even witness one of them stealing it!

Although not verifiable by Snopes, these are true stories and not urban legends. With cell phones that can take pictures and video, with security cameras and aspiring paparazzi everywhere, nothing we do or say is private. This is a sobering thought.

And it certainly has its negative side. I’m not sure that future careers need be damaged by youthful foibles and indiscretions but that is the price of youtube.

For me, it’s like having our modern-day version of tzaraas, the leprosy-like disease that afflicted the Jews in the desert if they spoke lashon hara, gossip, about their fellow Jew. Their punishment was instantaneous and I imagine very few of them made the same mistake twice. Their lips were sealed.

But we don’t usually see any consequences in this world for our cruel speech. Except – depending on your crowd – social approval or disapproval.

Until the advent of the ubiquitous video/camcorder/cell phone. Now every word we say in public (and sometimes in private too if we aren’t careful to turn off those security cameras) invites the possibility of being recorded for posterity.

It may not be a noble motive to refrain from slandering others but hey, it works.

That should give us pause. It may not be a noble motive to refrain from slandering others but hey, it works. And the Talmud teaches us that if we start out doing something good for the wrong reasons, we will eventually end up doing it for the right ones.

We’ve come a long way since the intimacy with the Almighty experienced by our ancestors in the desert. We’ve lost that gift of immediate consequences and with it the perspective on how damaging our negative speech can be.

While all this new technology certainly has its enormous down side, the constant awareness that your words or actions could be recorded right at this moment is certainly a powerful tool for keeping us in line.

The bride? Beautiful. The food? Delicious. The band? Well, I brought ear plugs…

Turn Off the TV and Leave them Alone
The Power Of Prayer
Va’etchanan 5782: A for Effort
Can You Show Me This "God?"
Comments
MOST POPULAR IN Family
Our privacy policy
Aish.com Is Looking for Great Writers