The Jewish Ethicist: Can I Quit? 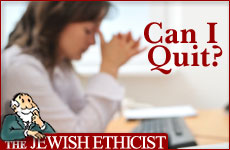 You are not a slave to your job.

Q. I'm thinking of leaving my job for something that will leave me more opportunity for other horizons. But my employer depends on me very much and has helped me very much. Is it ethical for me to leave her in the lurch?

A. This is a question I receive frequently. Very often people want a job which will give them more opportunities for spiritual growth – one that will leave them more time for Torah study, or one that will enable them to be in a community that will be more nurturing spiritually.

Once I had a brief discussion on this matter with a prominent Jewish leader. She told me that generations ago this kind of question was never asked. People took their work seriously and took pride in it, but only nowadays, she felt, do people feel subordinated to their work. I don't have the same perspective as this individual, but it is worth examining if this is really a modern phenomenon.

The strict law on this matter is very clear. Fundamentally, any worker is allowed to quit his job any time he wants, and be paid pro rata for the time he worked.

A worker is allowed to retract even in the middle of the day. As long as he does not retract he is subject to the authority of the employer; the reason he may retract is different [not because the employer lacks authority]. As it is written (Leviticus 25:55) "For the children of Israel are slaves to Me" – and not slaves to slaves. (1)

This passage demonstrates that the foundation of human freedom is our subordination to God. Since slavery among the Jewish people is rejected, and since forced labor for any amount of time is tantamount to slavery, the worker is given the right to retract.

There are certain exceptions, which the mishna refers to as "matters of loss." These are all cases where the agreement to work in the first place created a situation where quitting would now cause an actual loss to the employer. For example, in the time of the mishna clothes were laundered by placing them in a caustic bath. If the worker who is expert in this trade had not agreed to work, the employer wouldn't have laundered any garments. But once the worker begins work and puts the garments in the bath, if he then quits and leaves the garments in they will be ruined. So this is a matter of loss.

Another example is musicians for a wedding. If one band doesn't agree no loss is caused; another can always be obtained. But if the band cancels at the last minute, getting a new band on short notice is very expensive, so the cancellation causes a loss. (2)

This is the strict law, but that doesn't mean there is no value to being a conscientious worker and not leaving your employer in an awkward situation. Let us consider the example of one of our greatest sages, Rabbi Eliezer ben Horkanus:

What was the beginning of Rabbi Eliezer ben Horkanus? He was twenty two years old and did not study Torah. One time he said, I will go and study Torah before Rabban Yochanan ben Zakai. Horkanus his father told him: You may not eat anything until you plow a full furrow. He got up early in the morning and plowed a full furrow. It is said that he ate that day by his father in law, and some say he ate nothing that day . . . He [walked all the way to Jerusalem and] went to his inn, and went and sat before Rabban Yochanan ben Zakai. (3)

Rabbi Eliezer ben Horkanus was a grown man, and was free to leave whenever he wanted. We see that he did not plow the furrow in order to be able to eat at home, because in any case he ate by his in-laws, or perhaps not at all. As a matter of simple conscientiousness he wanted to complete the most pressing task that awaited him. He did not disappear without finishing his immediate assignment, but he also did not remain for an extended period.

I think that this is a good example for someone who is thinking of changing his or her work situation for one that provides more opportunities for spiritual growth. There is no reason to feel bound to the workplace; after all, we are slaves to God, not slaves to our bosses. At the same time, as a matter of conscientiousness it is generally fair and proper to coordinate your departure with the employer and complete pressing tasks so as not to leave your employer in an awkward situation.

Ethical issues aside, it is always prudent to consider carefully before leaving your job. Good jobs don't grow on trees, and I get occasional letters from people who left adequate if problematic work situations without adequate planning and find themselves in straitened circumstances. Staying on is not an ethical obligation to the employer, but sometimes it is the prudent course of action.

The Jewish Ethicist: How Poor is Poor

Wanted by the FBI
Bechukotai 5782: Divine Retribution
Behar 5782: Working to Live or Living to Work?
The Wholeness of Being Broken
Comments
MOST POPULAR IN Current Issues
Our privacy policy