In My Father's World 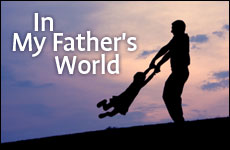 My father's love asserted itself in distinctive ways.

As a small Jewish girl growing up in Brooklyn, I dreamed of becoming a British soldier. Specifically, one of the wounded British soldiers who marched, whistling through broken teeth, in the film “Bridge on the River Kwai”. I knew my father admired them and I wanted desperately for him to admire me too. I tried very hard to be brave, like them. When the gory killing scenes came on I did not wince. “It’s just ketchup,” he would say at the spurting geysers of blood on the screen. “Just ketchup,” I would parrot, although I wasn’t really sure. 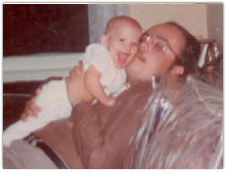 It was easy to see why he admired soldiers. My father claimed to have been a short order cook in the Army. Or perhaps the Navy. It was never quite clear. The story changed every time he told it and my mother would neither confirm nor deny. It didn’t matter really. The important thing was that he knew how to cook for hungry men. “Time to feed the troops!” he would say on those special occasions when he pulled down pots and pans and plates. Strangely, it seemed that the only thing the troops ate were eggs. But what eggs he made! Gourmet omelets, heavy with sauces, mushrooms, cheeses and olives. “That’ll make a man out of you,” he said as he added a splash of Tabasco. I loved those eggs. And even when I didn’t love them, I wanted to love them and ate every last drop and asked for more.

I loved those eggs. And even when I didn’t love them, I wanted to love them and ate every last drop and asked for more.

The Army (or was it the Navy?) had also taught him to shine shoes, a job which he did weekly with an equal mixture of precision and vigor. My father’s shoes, neatly lined up like animals waiting to board the Ark, would be subjected to the cream, the rag, the buffer and the brush. Afterward, they shone like new. No, better than new! I could see my face in them. “You know I love you, right?” he would ask, without looking up, as his dress shoes took their punishment. I nodded yes, yes, I do and my reflection in his shoes nodded too.

My father was fearless. At the mall when he bought us ice cream cones he would always take a big lick of each of ours before handing them over to make sure they weren’t poisonous. “I don’t care what happens to me,” he would say selflessly as his tongue paved a deep groove in the soft vanilla cream. “Just as long as you kids are safe I’m willing to risk it.”

I marveled at his courage. Someday, I hoped, I would be brave enough to take the first lick for my own children, disregarding my safety for theirs.

It was different with my mother. Her love was the motherly kind, hot chocolate on cold days and help with your homework. It was kind and dependable and constant. But my father, busy with the strange and mysterious doings of grown men, would often seem uninterested, unwilling to hear about my petty dramas, my schoolgirl conceits. His love asserted itself in other ways. It was in the way he cooled off my hot tea, pouring it patiently from one glass to the other, so I wouldn’t burn my tongue. Or how sometimes in the kitchen, he’d command, “Open your mouth and close your eyes!” and squirt whipped cream from the canister into my mouth. It was in the hours he spent blow drying my hair and painting my little fingernails. It was in the way he’d circle his fingers around my wrist when we walked together, only barely holding on.

Even shopping with my father was different than shopping with my mother. My mother went by a list, she shopped according to price and need and availability. My father had much more important criteria. “Sniff this, Yael,” he said and handed me a bottle of shampoo. I sniffed. It smelled like coconuts and suntan lotion and summer. “Always buy the shampoo that smells best, no matter what it costs. That’s what’s important, so make a note of it.” I did. I filed it in my mind under S for shampoo and sniffing and summer. Later, the shampoo would be joined in the cart by cashews and fresh rolls and tuna fish. Always tuna fish, which my father loved. “The white kind, Yael, not the chunk. That stuff’s cat food.” Was it really? I didn’t know and I didn’t want to find out.

My father loved music and cold milk and old movies. He loved exotic foods and medical journals and elephant figurines. But what my father loved most was my mother. “Still the best looking woman I’ve ever seen,” he would marvel as she walked down the stairs, without makeup. My mother waved his comment away but I wished fiercely that someday I might be the object of that kind of admiration from someone too.

Now, as then, I study him closely when he cannot see me looking. I am older now but he hasn’t changed very much. His eyes are still blue and his cheek deeply dimpled, his light brown hair parted neatly to the side. My father looks ordinary. But he views the world differently than other people. He is a student of the Jewish mussar movement, constantly disciplining himself to refine his soul.

“Ask yourself every time, is this worth losing my integrity?” By my father’s yardstick, nothing was.

My father loved the underdog, he loved each broken thing. And he hated the easy way, avarice, pride and greed. “Be straight, Yael,” he’d say and “Ask yourself every time, is this worth losing my integrity?” By my father’s yardstick, nothing was. He believed that each action defined a person, changed his DNA somehow. So people who lied were liars and those who stole were thieves. Life as my father understood it was black or white but never gray.

And he didn’t only preach it; he lived by a strict code of conduct. You do the right thing because it’s the right thing. That’s all. No reward, no parade; at least not in this world. You do business honestly. You tell the truth. “Your word is your bond,” my father would say, although I didn’t know what a bond was. And sometimes he would narrow his eyes and ask, “Do you give me your word?” when I said something that seemed questionable. I hesitated. I knew that the lowliest specimen in the world was the one who gave his word but didn’t keep it. I did not want to be that specimen. My father’s gaze demanded the truth even of children.

Sometimes it was hard to live up to. Sometimes I thought it impossible. I do not doubt that I disappointed him, and his unyieldingness often frustrated me. We cannot always please our parents, much as we may want to. We cannot always eat the eggs. In the complicated world of fathers and daughters there are many moods and moments, unspoken words and misunderstood gestures. A love so deep can be painful, hard to share. 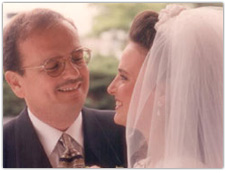 Without meaning to, I grew up and away. My teenage years arrived with all the usual drama and angst. I developed my own sense of humor, my own favorite movies. I learned to shop by myself. I dated and found a man with whom to grow old. Somehow, I grew into my own separate self. I grew into my husband and his particular needs and theories and interests. I grew into my children and their wants and desires and demands. I grew into my own busy life. I moved out of Brooklyn, I never polish my shoes.

It’s a funny thing though. I still believe in right and wrong, in black and white. I still cherish bravery above vanity and truth above peace. I never lost my desire to be the object of someone else’s desire. I never lost that need to be good and true. And I still buy the coconut shampoo.

Sick of Being Sick

Touching the World of Angels
Should I Break Up, Get Engaged or Keep Dating?
Time Is Your Precious Commodity
A Constant World in Flux
Comments
MOST POPULAR IN Family
Our privacy policy