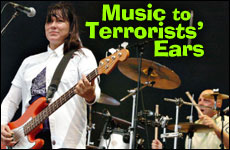 Some musicians are boycotting Israel in response to the flotilla. Our response: a Playcott.

So let’s get this straight. Israel evacuates every last inch of the Gaza Strip in 2005. To thank Israel for the gesture the residents of Gaza elect the terrorist organization Hamas as the ruling party which promptly fires 10,000 rockets at innocent Israeli citizens. Not surprisingly, Israel blockades Gaza’s sea port to ensure more sophisticated weaponry coming mainly from Iran can’t be sent to Hamas because Hamas will no doubt use the weapons to terrorize Israeli civilians.

But not to fear -- Israel delivers over 10,000 tons of humanitarian aid to Gaza weekly, more than any other place in the world. But apparently, that’s not enough. So a group of activists set sail on a “Flotilla” (not to be confused with a “Tortilla”) of six ships attempting to break Israel’s blockade. Five of the ships were diverted peacefully by the IDF to the port city of Ashdod. The other boat however, the Mavi Marmara, had numerous passengers with connections to terrorist groups. When the Israeli soldiers boarded the boat the “activists” attacked the soldiers with knives, slingshots, spikes, clubs and guns. The Israeli soldiers were forced to defend themselves and nine people died. A number of Israeli soldiers were seriously wounded.

Now, if you are the Prime Minister of Turkey (not naming any names here), and you have been cuddling up to Iran and have been looking for your opportunity to ditch your pesky alliance with Israel and get a little Islamist street cred, we can’t blame you for making a mountain out of a Mavi Marmara.

We can’t blame Turkey for making a mountain out of a Mavi Marmara, but the Pixies?!

Nope. If you are The Pixies, you cancel your show scheduled in Tel Aviv.

That’s right. As reported here, The Pixies cancelled their show in response to the Flotilla incident saying “We can only hope for better days.” Apparently, the 13 Israelis who bought tickets to the show are quite distraught.

Unfortunately, it doesn’t end there. London based punk band The Klaxons also cancelled their scheduled Israel performance so Israelis will not get to hear them perform their hit song "Atlantis To Interzone" in which they sing “Good thieves of burning cars encircle poisoned rivers minds and hearts.” Hmm…Burning cars? Poisoning rivers, minds and hearts? Are they talking about Hamas?

Another London based punk band (anyone seeing a trend?) Gorillaz also cancelled its Israel tour date due to the Flotilla. Interestingly however, on the Gorillaz 2007 album Plastic Beach they featured a guest performance by the Lebanese National Orchestra. For those keeping score at home Hezbollah, considered a terrorist organization by the United States and others, is a full fledged member of the Lebanese government. Hezbollah accused Jews of deliberately spreading H.I.V. and other diseases to Arabs throughout the Middle East. Gorillaz loves Hezbollah. OK they never said that, but that was Jewalrious trying to get in touch with our inner “punk rocker.”

Sadly, there were some musicians who cancelled their trips to Israel even before the Flotilla incident. They include Elvis Costello who, when he agreed to perform in Israel told The Jerusalem Post that the reason why he was coming was because the only answer to the Israeli-Palestinian conflict is “dialogue and reconciliation,” and only two weeks later apparently said “just kidding.”

Carlos Santana also cancelled and was apparently bullied into the decision by anti-Israel activists. Wow, these “activists” are busy. Bullying Santana and ambushing Israeli soldiers on flotillas? Where do they find the time?

But all is not lost. Some musicians are still scheduled to play in Israel. A list of the brave ones include:

So what should we do about this situation?

So we at Jewlarious would like to suggest something similar for musicians who are scheduled to play in Israel – a PLAYCOTT. If there are “activists” encouraging these artists to cancel their tour dates in Israel, well let’s get active and encourage them to play in Israel. Even if we don’t like the music. Just think of it as though you are taking medicine. A placebo, if you will. Because boycotts are simply music to Hamas’ ears.

Shtisel Returns
Why My Iranian Mother Didn’t Want Me to Become a Religious Fanatic
The Jewish History of Prague
Why the Sexual Revolution was Bad for Women
Comments
MOST POPULAR IN Jewlarious
Our privacy policy
Aish.com Is Looking for Great Writers