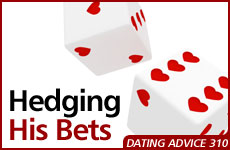 Though she may by The One, he’s still dating other people.

I have been dating a man for two months, who I started a friendship with five months ago. He is dating for marriage. We have a great time together and have common goals, interests, religious practices, and values (or so it seems so far), as well as attraction for each other, and some shared history.

The problem is that he believes it is wisest for him to continue dating other women online. Since finding the right person to marry is important to him, he believes it is foolish to commit to a relationship until he is sure he is on a marriage track with that person. He believes he will be able to get more certainty while dating others. I think I am his principal interest, despite him using his online dating profile each day.

He’s trying to manage the challenges of dating multiple people.

I believe that his method is misguided for many reasons, many of which you have previously explained in your columns. I discussed this with him and we disagree on philosophy. He believes he can manage the emotional challenges of dating multiple people, and can do so ethically.

I am not sure how to handle this. Should I stick with it and do my best to learn about him and develop our emotional connection, even though I believe his choices make it difficult? Should I continue to discuss the issue, at the risk of turning our interaction dour at an early time with heavy discussions about what we disagree on, instead of focusing on the positive?

I believe that he and I are not in the same place emotionally as a result of our different behaviors, and this is something I notice in small ways when we are together. However, I do not believe this means that he and I will not get to the same level over time. I hesitate to issue an ultimatum, or break off a promising courtship.

You are asking a very important question: Should you keep going out with someone who says he's dating for marriage and claims to see the potential in your relationship, but is also actively seeking other dating partners until he can be sure that you're the right one for him?

We have two significant concerns about this man’s approach to the dating process. The first is that he doesn't appear as invested in your relationship as you are. That seems to be the primary reason he is hedging his bets by continuing to search for "someone better" online.

In our experience, a man who really believes a woman has potential as a marriage partner actively pursues her. He doesn't keep looking for another choice. When a man keeps looking for other options it often means that he's already decided she's not for him, but “she's nice to keep around until the right one comes along.”

Our second concern is the fact that this practice creates a vicious cycle. It could very well be that the two of you are right for each other, but his approach to dating will prevent him from ever coming to that realization.

We believe that as soon as a man and a woman decide that their courtship has potential, they should date each other exclusively. They need to invest proper time and emotional energy to get to know each other, to explore mutual life goals and values, create a shared history, and develop the deep friendship, trust and affection that we call “emotional intimacy.” It may be that they'll decide they're not really right for each other, but they should nevertheless follow this practice from an early stage of dating. Otherwise, there are too many distractions that can keep them from exploring things to the degree necessary in order to know whether or not they are suited for marriage.

In your case, this man may have any of number of reasons to rationalize why exclusivity doesn't work for him. Perhaps he isn't really ready to commit, in spite of his insistence that he's dating for marriage. Maybe he likes just having fun, or it makes him feel good to have so many women interested in him. And maybe he really believes that he'll "just know" when he meets the woman he will marry, and that's why he keeps searching for her.

We think that if you continue to go out with this man while he keeps hedging his bets, you are likely to end up getting hurt. You'll either grow frustrated that the relationship isn't moving forward because he isn't investing enough into it, or he'll find someone he thinks is better for him. Whichever comes first, it won’t end up good for you.

Even though we often encourage daters who disagree on something fundamental to try to talk things through, it seems that the two of you have already discussed this subject sufficiently. It's unlikely that any more talk will be beneficial. Only one of you is sufficiently invested in this relationship. You can ask once more if he wants to make a similar investment, but if he doesn't agree, we think it's time to withdraw your capital and find someone who has more growth potential.

Dating Advice #198 - Commitment Phobia?
Should I Break Up, Get Engaged or Keep Dating?
Time Is Your Precious Commodity
A Constant World in Flux
Comments
MOST POPULAR IN Dating
Our privacy policy