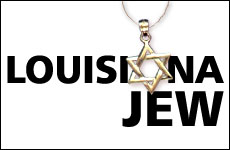 There are not many Jews in my part of Louisiana. In fact, I'm the first (openly) Jewish person most of my friends had ever met. Even most of my own family denounced their Judaism for the sake of "safety and social status" after moving here from Austria and Germany.

I refused. My mother, who passed away when I was 16, didn't raise me that way. So ever since grade school, I've worn a Star of David around my neck, regardless of what threats and rumors were circulating. And circulate they did; my first religious fight was in the first grade. She was on the "good side" as a Christian, and I was the "bad side" as a Jew.

I was not a popular kid among students or teachers. In our heavily southern-Baptist town, wearing a star of any kind is not the way to gain popularity. By the time sixth grade rolled around, my peers started pulling sick rumors about the "baby-microwaving, Jesus-murdering Satanic Jewish girl."

I was frazzled by the illogic of it all. Where would a 12-year-old get a supply of babies to be microwaving on a regular basis? Christ killer? I wasn't even alive 2,000 years ago. And I have yet to meet a Satanic Jew.

My teachers participated in the crusade by drawing crosses on my test papers, with a note saying "Jesus loves you." I figured it was illegal to write such a thing on a students paper, but I didn't know what to do.

I became angry and sullen. Puberty was hitting me like a ton of bricks, my mother was sick with lung disease, and hereditary manic depression was setting in. I developed eating disorders. I self-injured. It's a long story. I was getting into fights and getting suspended.

My Jewish self became the innocent bystander in a troubled teen's body. I became a pariah, unable to separate the facts of my being psychotic and the innocent reality of being Jewish.

My belief in God is the only thing that kept me going (even though the other kids said I didn't believe in Him and that I was going to Hell).

I now realize I was the victim of good ol' anti-Semitism. The bullying started way before I was an angry teen, and it continues even to this day.

Now, at the ripe old age of 18, I wish I had handled things differently. I’m the only Jew these kids ever came in contact with, and maybe ever will. Whenever the word "Jew" is heard by their ignorant ears, they'll think of messed up me, with the Star of David dangling around my neck.

So anger, imperfections and all, I will try harder. To be special, to shine the light.

That’s the way my mother raised me.

Menorah on Top of the Tree

The Scary Jew Next Door

No Thanks, Mr. Gandhi
In the Shadow of David and Goliath
Where Do the Laws of Nature Come From?
Saadiah Gaon, Rashi and Maimonides: How Three Rabbis Revolutionized Judaism
Comments