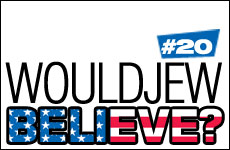 Next to whether Elvis is alive (and perhaps Jewish) the question who was the “real” Shakespeare has got millions “all shook up.” The “real Shakespeare” candidates abound, and include the Earl of Oxford; Christopher Marlowe; Bacon; and even Queen Elizabeth I.

Now, we’ve got a lantslady to add to the mystery. A writer for the Toronto Globe and Mail checks out the theory presented by one John Hudson, that an Italian Jewess or Converso, Amelia Bassano Lanier (1569-1654), was the true Bardess, or at least a colleague, consulting on story lines. Not quite out of thin air, her name is on the list of “possibles” created in 2006 by the Shakespearean Authorship Trust.

"O Romeo, Romeo! Wherefore art thou Romeo?" "What the dickens?" “What's in a name?” "If you prick us, do we not bleed? If you tickle us, do we not laugh? If you poison us, do we not die? And if you wrong us, shall we not revenge?" “When he himself might his quietus make With a bare bodkin?"

Personally, the gal has a shot. Between a Brit and a Jew, who would ask so many questions?

Between a Brit and a Jew, who would ask so many questions?

Who isn’t looking for a way to make Judaism more “relevant” to YJAs? Rapping, comics, Jewish geography, Jewish dating services, and of course, clothes. One of the hottest new trends is the witty, sarcastic Jew-T. Young Jews everywhere are checking in -- and checking things out -- wearing their heritage with a little Jew-ster hip.

“Yo-Semite,” “Trust Me, I’m a Rabbi” are two. On the net, there are increasing sites devoted to what they call JUC (JewishUrbanChic) --younger Jews, wearing their silk-screened ethnicity across their chests are boldly proclaiming to the world, “I’m a Jew.” A good thing? Personally, like everything else, to me: “It depends.” Tasteless, tactless, tarty? Nah. But a little wit? A tiny titter? An announcement?!

“Nifter-shmifter! As long as you make a living.” (“Nifter” literally means “not alive.”)

According to Judge Alex Kozinski and Eugene Volokh, Yiddish has started to appear in legal defamation cases. They report a 1972 New York case concluding that calling the fare at a restaurant “ground-up shmutz” was not actionable, as it could be construed as an opinion. --

What Jewish male hasn’t suffered from those pesky yarmulke emergencies! We all know them. You’re at an amusement park, your little mazek insists you go into the X-tra Chills wind tunnel and Boom! Your yarmulke flies higher than Mary Tyler Moore’s beret. You’re a star hockey player, and Kalman the Kicker knocks off your kippah! Boom! Another catastrophe. Well, no more. Through the merging of technology and religion, all you need is the iPhone’s iKippa app. According to creator Uri Kelder, choose a design that’s “you,” give a punch, flip your phone, and Boom! It becomes a yarmulke! (Not to be used on Shabbat. But then again, what are you doing at Disneyworld then anyway?)

But Stuart Rubin can’t be beat. Need a bissel advice, admonishment, a recipe, a “Not every prospect has to be a college graduate” encouragement? You can get it from a bubbe “in your pocket” with his iGavolt. Oy Gevalt!

Personally, I’m waiting for iMayYou. A little frustrated? Angry? Fershluginer? Punch the button and out comes Joan Rivers screaming: “May you fall into the outhouse just as a regiment of Ukrainians is finishing a prune stew and twelve barrels of beer.”

Superman, Batman, Spider-Man, Daredevil, Captain America, the Fantastic Four! All created by Jews, who many believe were imbued them with the Jewish values of Freedom, and Justice for All!

The Berlin Jewish Museum's newest exhibition, "Heroes, Freaks and Superrabbis -- the Jewish Colour of Comics," looks at 45 comic artists, many from European Jewish immigrant families that settled in New York.

Perhaps most interesting about the exhibit that runs from April 30 to August 8, is a focus on these “Yiddishe” Superheroes taking on Hitler during WWll. The first Jack Kirby and Joe Simon issue of “Captain America” showed our hero clobbering Hitler on the cover.

Superman a.k.a. Kal-el (Hebrew: Voice of God), created by Jerry Siegel and Jerome Schuster in 1934, most bugged the heck out of Nazis! Nazi Propaganda Minister Joseph Goebbels accused actually denounced The Man of Steel for being a Jew. (Which he may have been!) With “Uber-Man” in control, Hitler would’ve been known as Schickelgruber, the psychotic house painter. A statue of Superman outside the museum shows him, head trickling Kryptonian blood, on the pavement. The sculpture is called “Even Superheroes Have Bad Days.”

GET YOUR BABKA FIX

Who can forget that wonderful moment on Seinfeld, when Elaine and the boys, on their way to a dinner party, need to pick up a little something for the hosts. And the bakery just sold their last chocolate babka? Well we don’t have to fear being babka-less anymore because now we can get our babka fix by joining the Continental Kosher Bakery’s Babka Club (www.BabkaClub.com).

Once you join you get a fresh baked Babka of your choice, a Club T- Shirt, and Lifetime Membership Certificate. PLUS, if you wear your T-shirt at the bakery, you’ll get a 10% discount. For the true babkamaven, you can have yours delivered every month – in cinnamon, chocolate, even apple or cherry.

Creator of the BabkaClub.com, Continental Kosher Bakery, is the oldest Kosher Bakery in the San Fernando Valley and was started in the early 20th century when Phillip Levenson immigrated with his cherished recipes in hand and opened his first New York City bakery.

In case you were wondering, I’m a very nuanced person. A very hungry nuanced person -- who prefers chocolate ... then again and cinnamon is always good for company – but when it comes to babka, face it. Who needs company?

Letter from a Terrorist3 min read