The Jewish Ethicist: Making a Match 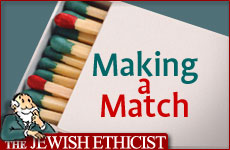 Q. Is matchmaking a suitable use of charity funds?

A. A cardinal principal of the Torah is "It is not good for man to be alone" (Genesis 2:18). When we see the large number of single men and women longing to find the perfect match, it is only natural that as neighbors and as a community we seek to help them.

Some Jewish organizations conduct various events to encourage meetings between unmarried people. These may include mixers, "speed dating" and so on. Another way meetings can be helped along is by actually setting people up. A few Jewish schools where many single people study have an informal but recognized position of "student matchmaker" who makes it her job (usually but not always it is a woman) to become familiar with the students and keep her eye out for suitable potential matches.

Matchmaking is considered a worthy activity in Jewish tradition. A well-known Midrash describes God Himself as a matchmaker:

A [Roman] noblewoman asked Rabbi Yosi bar Chalafta [as follows]: How many days did it take the Holy One blessed be He to create His world? He said, Six days, as it is written, "For in six days the Lord created the heavens and the earth. She said to him, and from then until now what does He sit and do? He said to her, He arranges matches.(1)

Appropriately, human beings are likewise urged to engage in this activity, and the Talmud states that this is one responsibility of parents:

The rabbis taught: The father is responsible towards his son to circumcise him, to redeem him [if he is captured], to teach him Torah, to marry him off, and to teach him a trade. (2)

The continuation of the passage makes clear that this responsible involves not only providing the financial means that will enable a suitable match but also actively helping in the search.

Another passage tells us that marrying someone off is part of the commandment to give charity. The Torah tells us (Deuteronomy 15:8):

Surely open your hand and lend him enough for his needs, whatever is lacking to him.

After the verse refers to "his wants," it goes back and makes reference to "whatever is lacking to him." The Sages of the Talmud viewed this as a hint that we need to consider an additional kind of need, one that is unique to this person: a spouse. (The idea is that the person's "marriage made in heaven" is specific to him or her.) While the main emphasis in that passage is on providing the material needs of a new household, the Talmud uses the specific language of "marrying off" the needy individual, and we see from the above passage that this also includes finding a match in the first place.

Every community has to thoughtfully budget its charity funds and organizational resources, and set appropriate priorities. One worthy goal that should be considered among these is devoting resources to activities that will help single men and women find that unique other "lacking to him" (or her).

The Jewish Ethicist: Owner, Not Ruler