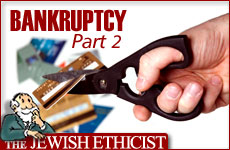 Debtors have to be left a minimal livelihood.

Q. Is it ever ethical to declare bankruptcy?

A. Last week we discussed the Torah law foundations of the Jewish approach to insolvency. In this column we will expand on one application: a payments arrangement for an insolvent debtor. This is one possible outcome of bankruptcy.

The principles of this debt arrangement have an interesting source: the laws of Temple donations. The book of Leviticus describes how these assessments are evaluated, and then gives the rule for insolvency. (Leviticus 27:8, Living Torah translation)

If [a person] is too poor to pay the endowment, he shall present himself before the priest, so that the priest can determine the endowment valuation. The priest shall then make this determination on the basis of how much the person making the vow can afford.

The mishna provides more detail on how we carry out this determination:

Although assessment debtors may have their property seized, they must be left enough food for three meals, and clothing for twelve months, a bed and bedclothes and tefillin. . . If he is a workman we leave him his work tools, from each kind. (1)

The Talmud points out that in general the laws of the debtor are more lenient than those of someone who has made a dedication. For example, as we saw last week the borrower's pawn needs to be returned and exchanged when he needs it. So it follows that these same leniencies apply to an ordinary debtor. We also know this because the reason the Torah gives for the assessment is that the person is "too poor". This reason applies to any poor person. (2)

The source for leaving a workman the means of making a living is learned directly from a Torah verse (Deuteronomy 24:6):

Do not take an upper or lower millstone as security for a loan, since that is like taking a life as security.

Here the Torah tells us that taking a person's livelihood is like taking his life. Of course there is also a practical reason for this – if a person can't earn a living, he will be unable to pay back the debt. But the Torah emphasizes the human aspect of the law, and likewise rejects a punitive approach to debt repayment, instead obligating a constructive and rehabilitative approach.

The rejection of a punitive reproach to debtors is a consistent theme in Jewish literature. Maimonides emphasizes that an insolvent debtor cannot be imprisoned or put to work; we are only allowed to collect from what he has:

According to Torah law, when the creditor demands his debt from the debtor, if the debtor has assets we leave the debtor essential assets and give the rest to the creditor as we explained. And if we cannot find any assets of the debtor,or only those assets that we leave him, we let him go his way. We do not arrest him, nor ask him to bring proof that he has no other assets. (3)

So the basic principle of leaving an insolvent debtor minimal assets for his upkeep and his continued income is one which is emphasized in Jewish law and tradition.

The Jewish Ethicist: Judaism and Hunting

The Jewish Ethicist: Ethics of Being Overweight