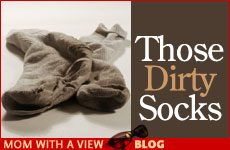 Don't over analyze your marriage.

“When couples experience these big challenges (job loss or sickness in the family), they actually come together and support one another,” says Terri Orbuch, as psychologist and research professor at the Institute for Social Research at the University of Michigan, who is the director of the Early Years of Marriage Project, one of the longest-running studies of married couples in the country. “Instead, it’s the seemingly small things that pull them apart.”

This piece of information was quoted in Elizabeth Bernstein’s recent Wall Street Journal piece, “Honey, Do You Have to…?” According to Ms. Bernstein, we should definitely sweat the small stuff.

While it’s hard to be empathetic to the woman who didn’t like the way her husband buttered English muffins (puhlease!), I understand why women (and sometimes men) get frustrated about dirty socks on the floor, untucked sheets on the bed and that ubiquitous toilet seat. I just think they’re making a mistake.

Wait. Hear me out before you start yelling.

Are we frustrated because some of these things mean extra work for us? Yes, but it is frequently totally without perspective. I, like one of the women in the piece, find myself getting annoyed every time my husband puts his coffee cup in the sink instead of the adjacent dishwasher. How much time does it take me to put it there instead? A few extra seconds – maybe. The negative thoughts definitely occupy more time and space. Is it really worth adding even one drop of tension to my marriage over a dirty cup?

Does it really mean that your spouse isn't listening to you?

Does it really? If it’s true that when you are discussing big questions like where to send your children to school or how you can fully achieve your work and personal potential, your husband is non-responsive, then I agree, it’s a serious concern. If he shows no interest in your life or your goals or those you have for the children, your marriage may benefit from professional intervention.

But if he’s there for you on the important issues but awol on the dirty socks, maybe something else is going on. Maybe it’s not about you or your marriage.

For some people, how nice the towels look neatly folded in the bathroom is completely irrelevant. Towels are functional -- they dry hands and other wet body parts. It’s not that your spouse didn’t hear your words; it’s just that they were spoken in a foreign language. It’s not a way of looking at the world that he understands.

But he could learn, you counter.

It’s certainly possible that with enough effort and enough reinforcement (either negative in the form of screaming or positive in the form of praise), you’ll get those towels straightened out. But it seems a high price in time and effort.

Let the small stuff go. Things are not always symbolic. Sometimes a dirty sock is just a dirty sock (or something like that). We don’t need to over analyze or over invest in small actions or omissions.

Based on the studies read and the interviews conducted, Ms. Bernstein concludes that we need to sweat the small stuff. After all, it impacted all the marriages described in a negative fashion.

But perhaps she has drawn the wrong conclusion. Perhaps if these women hadn’t allowed themselves to “go there,” perhaps if they hadn’t sweated the small stuff to begin with, their marriages would have survived intact -- maybe even healthier and happier. There’s small stuff in every relationship we have in life. The wisdom and growth lies in knowing when to just let it go.

Put a Fix On It

My Daughter Ate My Homework

Don’t Get Smashed on Purim

I'm Really Sorry
Saadiah Gaon, Rashi and Maimonides: How Three Rabbis Revolutionized Judaism
King Sennacherib and the Siege of Lachish
Three Small and Easy Changes to Add Positivity in Your Home
Comments
MOST POPULAR IN Family
Our privacy policy
Aish.com Is Looking for Great Writers