Jerusalem: Heart of Our Heart 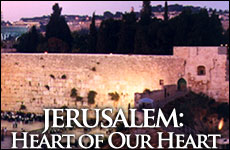 Jerusalem is above politics.

Nobel Prize-winning author and Holocaust survivor Elie Wiesel today took out a full-page ad in the Wall Street Journal, in the form an open letter to President Obama, with whom Wiesel visited the Buchenwald death camp last year. Here is the text of the letter.

It was inevitable: Jerusalem once again is at the center of political debates and international storms. New and old tensions surface at a disturbing pace. Seventeen times destroyed and seventeen times rebuilt, it is still in the middle of diplomatic confrontations that could lead to armed conflict. Neither Athens nor Rome has aroused that many passions.

For me, the Jew that I am, Jerusalem is above politics. It is mentioned more than six hundred times in Scripture-and not a single time in the Koran. Its presence in Jewish history is overwhelming. There is no more moving prayer in Jewish history than the one expressing our yearning to return to Jerusalem. To many theologians, it IS Jewish history, to many poets, a source of inspiration. It belongs to the Jewish people and is much more than a city, it is what binds one Jew to another in a way that remains hard to explain. When a Jew visits Jerusalem for the first time, it is not the first time; it is a homecoming.The first song I heard was my mother’s lullaby about and for Jerusalem. Its sadness and its joy are part of our collective memory.

When a Jew visits Jerusalem for the first time, it is a homecoming.

Since King David took Jerusalem as his capital, Jews have dwelled inside its walls with only two interruptions; when Roman invaders forbade them access to the city and again, when under Jordanian occupation. Jews, regardless of nationality, were refused entry into the old Jewish quarter to meditate and pray at the Wall, the last vestige of Solomon’s temple. It is important to remember: had Jordan not joined Egypt and Syria in the 1967 war against Israel, the old city of Jerusalem would still be Arab. Clearly, while Jews were ready to die for Jerusalem they would not kill for Jerusalem.

What is the solution? Pressure will not produce a solution. Is there a solution? There must be, there will be. Why tackle the most complex and sensitive problem prematurely? Why not first take steps which will allow the Israeli and Palestinian communities to find ways to live together in an atmosphere of security. Why not leave the most difficult, the most sensitive issue, for such a time?

Jerusalem must remain the world’s Jewish spiritual capital, not a symbol of anguish and bitterness, but a symbol of trust and hope. As the Hasidic master Rebbe Nahman of Bratslav said, “Everything in this world has a heart; the heart itself has its own heart.”

Jerusalem is the heart of our heart, the soul of our soul.

Jerusalem: Jewish and Muslim Claims to the Holy City