Lessons from My Stroke Patients 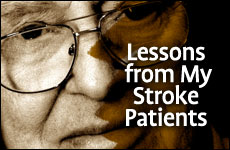 I came prepared for the worst.

There's Minna, the American immigrant who left a lucrative job in the States and came with her family to Israel in the 1970's. There's Davidi, a North African immigrant who can vividly describe growing up in Tunisia in the 1930's. There's Sarah, an expressive Moroccan woman who supplements her passionate opinions with occasional kisses heavenward. And there's Achmed, whose children demonstrate a level of respect for their father that we all need to emulate.

They live in Jerusalem, and they are all my stroke patients.

I am a speech language pathologist in training, currently doing my internship at a rehabilitation facility in Jerusalem. The center is inhabited mostly by neurologically impaired or critically ill patients, some of whom have been on ventilating support for years.

When I told people where I was going to be training, the reactions were mostly disheartening. “How depressing,” “that's a tough place,” “how will you not let it get to you?” So on my first day -- which fell out on Yom HaShoah, Holocaust Remembrance Day -- I came prepared for the worst.

I left enriched and inspired.

Davidi was first. He was wheeled into the therapy room by an aide and wore a dazed and faraway expression. His hair was matted, his pajamas disheveled, and a catheter seemed to be causing some measure of discomfort. My supervisor began the session with voice exercises. Davidi was trying hard but could barely hold a straight tone for three seconds. His frustration and restlessness mounted.

Several minutes into the session, the piercing siren began to sound. My supervisor and I were disoriented; we had forgotten the significance of the day. “Yom HaShoah!” Davidi croaked, with a clarity of voice that we hadn't heard the entire session. “La'amod (stand)!” Davidi's paralyzed leg didn't allow him to stand, but he wanted to make sure we would.

We stood solemnly and then he spoke. “I am a survivor. In Tunis, they made us wear yellow stars.” Davidi used his hands to show us where the star would go. “They sent us to forced labor, forced!” he almost shouted. His eyes watered; they seemed to gaze far past the hospital walls into a world of dark memories.

The wail of the siren died down. Our vocal function exercises resumed -- Davidi with renewed strength, and we with newfound respect.

Sarah came for therapy next. She has right hemiplegia and cannot stand or sit without assistance. She was crying. “I am crying for myself!” she announced. “After a beautiful Passover with my son, I just fell -- pitom! (suddenly) — and couldn't get up. Look where I am now…” I nodded sympathetically and held her hand.

“It is terribly difficult, but it will pass,” my supervisor reassured her.

Sarah shook her head and pointed to the sky. “Only He who caused it can make it pass. God, help me…heal me!”

She proceeded to talk to God. She told him that it is very hard for her here, that she doesn't like the food, that she can't even light the Shabbat candles properly. Could God please make sure that gets better, and soon?

We waited silently, wishing that we, too, could engage in meaningful conversation with God that easily.

When it was time for Achmed's session, we went directly to his hospital room. His son and three daughters were waiting for us, clothed in traditional Muslim garb. Achmed's stroke had necessitated the insertion of a feeding tube, but his family was eager to wean him off and reintroduce oral feeding. We offered him teaspoonfuls of soft cheese in order to assess his swallow, but he wasn't interested in eating.

With astounding patience, each child gently began to coax him into swallowing. “Abba, ibla [swallow], Abba, ibla…” One by one, they stroked him on the cheek, kissed him, and massaged his face as they spoke soothing words in Arabic. “Abba, the therapist is here to help you eat. Ibla…” After 15 minutes of attempts, it was decided to try again on a different day. My supervisor asked when the family would be visiting next to coordinate an assessment time. “Oh, we're all here every day, for several hours. There is always someone here.”

We left the ward moved by the devotion and respect we had witnessed.

Working in this healthcare facility is not a continuous delight, but my experience has been anything but depressing.

Yes, I am learning a lot about dysphagia and aphasia. But I am learning even more about goodness and faith, about the remarkable resilience of the human spirit.

Malka Forster is a speech-language pathologist who lives with her family in the Judean Hills. She is also a freelance writer and copywriter whose work has been published in numerous Jewish publications.

The Jewish Ethicist: No Such Thing as a Free Lunch

The Jewish Ethicist: Fair Pay
The Blue Beyond
Great Place to Live
Is Eating Supposed To Be Spiritual?
Comments
MOST POPULAR IN Current Issues
Our privacy policy