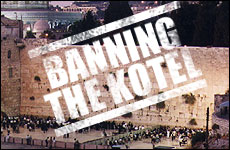 As we in Israel gear up to celebrate our 62nd year of Independence, the last 43 of which have been led from an undivided capital city, the British Advertising Standards Authority (ASA) seems intent to burst our balloons and take down our strings of flags.

In response to a complaint about an Israeli Government Tourist Office-issued UK advertisement depicting the Western Wall (with bits of the Temple Mount and the Dome of the Rock in the background), the ASA has ruled that the ad is in breach of their clause 7.1, “Truthfulness,” since the locations pictured are not in Israel, but instead are located in East Jerusalem, which the ASA considers part of “the occupied territories of the West Bank.”

It is rare to encounter such an obvious example of misplaced intentions. Usually such anti-Israeli drivel gets the benefit of a slightly thicker veil. Set aside the obvious fact that travelers to Israel can, in reality, expect to visit the Western Wall and all of Jerusalem – both east and west (this was one of the Israeli Ministry of Tourism’s responses to the ruling). And set aside that the ASA, in turning a perfectly innocent advertisement into a political podium, has discredited its legitimacy as the UK's independent regulator of advertising and revealed its ulterior entity as a political unit. The argument on which their ruling is built is far from sound.

Jerusalem in its entirety has, since Israel liberated it in 1967, been the undivided capital of the Israeli sovereign state. Not to mention that the Western Wall, the remains of the Second Temple, at the center of the “problematic” image, is a site that has connected Jews to Jerusalem for the last 2,500+ years before that. It is the icon of Israel.

The ASA’s choice to politicize the ad’s image of Jerusalem – and to ban from the UK all future Israel tourism ads with similar images – raises another interesting question. Has the ASA opened similar cases against the UK’s World Travel Guide for including Jerusalem’s Old City and the Temple Mount in their Palestinian National Authority Sightseeing guide? What about the two largest Palestinian tourist websites, the Official Website for Tourism in Palestine and Visit Palestine, which both advertise Jerusalem on their front pages?

Unfortunately, we have come to expect this not-so-thinly-guised anti-Israel stuff from the UK, which over the last six years has given us academic boycotts and arrest warrants against Israeli officials including former Foreign Minister Tzipi Livni, Defense Minister Ehud Barak, Maj. Gen. (res.) Doron Almog, former IDF Chief of Staff Moshe Ya’alon and Public Security Minister Avi Dichter. But, if what the ASA website says is true, that their authority is recognized by the Government, the courts, and other regulators such as the Office of Fair Trading (OFT) and the Office of Communications (Ofcom), then we can’t let this incident go uncontested.

Hopefully British common sense, justice, and truth will triumph over special interest complaints like the one filed by the single complainant to the ASA. But it’s up to us to do our part to make that happen.

A recent posting to the ASA site indicates that they have received a lot of complaints about the ruling, but have decided to stick to their guns. You can still appeal to them at: enquiries@asa.org.uk. And/or join the Facebook petition at: http://www.facebook.com/group.php?gid=105445376164602&ref=mf

A Letter to Nicholas Kristof