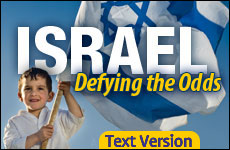 Only 62 years old, 7 million people strong (less than Virginia), and smaller in size than New Jersey, surrounded by enemies, under constant threat and possessing almost no natural resources, and yet…

* Counting from the founding of the State of Israel in 1948, three countries (East Timor, Iceland and St. Lucia) have won one or two Prizes each but because their populations are between 170,000 to 1 million they technically have more awards per capita. Israel has received 9.

Gaza and Redemption
The Blue Beyond
Great Place to Live
Is Eating Supposed To Be Spiritual?
Comments
MOST POPULAR IN Israel
Our privacy policy