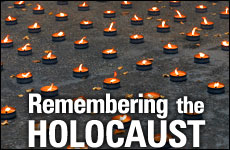 The Holocaust is one of the most painful periods of modern Jewish history. There are many lessons to be learned from this tragic period that we dare not forget. Here are two that resonate with me.

This dark time when for many it seemed as if God was in hiding, ironically shows how important God is in our life, even in a so-called educated and civilized society.

Before the Holocaust, Germany was one of the most cultured and sophisticated societies. Some of the biggest anti-Semites were the intellectuals.

Hitler rejected the notion of answering to a higher authority. A stanza from a song by Hitler Youth went, “The Pope and Rabbi shall be gone, we want to be pagans once again.”

Hitler believed in the supremacy of the Aryan race, what the Nazis called, the “master race.” A person can only believe that if they deny God’s existence. If we are all created in the image of God, then there is no “master race.” Persecuting a people is an affront to the Creator. By proclaiming their superiority, the Nazis stripped humanity of its innate divinity. There became no difference between killing a rodent or killing a Jew. In their propaganda films, the Nazis used videos of vermin and spliced them alongside videos of Jews, to indoctrinate this equivalency.

The Nazis showed the total disregard for human life that a Godless ideology can lead to. We need to remember how low humanity can stoop, to remember how important God and morality are as an anchor in our lives. Without it, people can become savages in designer suits.

Hitler knew more about what it means to be a Jew than many Jews today.

The second lesson of the Holocaust revolves around a sad truth: Hitler knew more about what it means to be a Jew than many Jews today. If someone asked you, “What does it mean to be a Jew?” what would you answer them? Tragically, many Jews would say that it means people hate us and try to kill us. If that is all that being Jewish means to them, then why would they be proud to be Jews? Is the rampant assimilation we see today a surprise?

Hitler made it clear why he wanted to exterminate the Jews. He wanted to eliminate every last Jew in the world. The reason he gives is that the Jew is the conscience of the world; its moral voice. In his words, “The Ten Commandments have lost their validity. Conscience is a Jewish invention; it is a blemish like circumcision.”

We are the bearers of the message of Sinai. This message, while giving meaning to our lives, like all things of value, comes with a price. The price is part of its value; the privilege and responsibility of being God's messenger of morality. Hitler wanted to act unbridled; to do what he felt like doing, without any compunction. The Jew was a thorn in his side; a constant reminder of the expectations that our Creator has for each and every one of us.

It is written in the book of Isaiah, that the Jewish people are charged with the mission to be “a light unto the nations,” to live an exemplary life; to show the world what it means to be honest, charitable, and kind. Israel has done this recently in Haiti, by setting up one of the most advanced hospitals there. One Haitian woman who gave birth in that hospital, named her baby Israel, in deep gratitude for their help.

It is not enough to just read about God’s call to be “a light unto the nations;” it needs to be lived and written on our hearts. The world is waiting for us to stand proud and say with conviction, “This is what it means to be a Jew.” How long must God stay in hiding, waiting for us to hear His call?

Yaakov Weiland has an MSW from Fordham School of Social Service and lives in New York City. He has been published in Flatbush Jewish Journal, Image Magazine, Arutz-7, OU.org and The Jewish Press. To read his new, free e-book, Inspired: 30 Days to a More Meaningful and Fulfilling Life, click here. Visit Yaakov's blog at www.yaakovweiland.blogspot.com.

Why the Jews? Exploring the Unique Meaning of the World's Longest Hatred
Scientific Curiosity and the Divine Encounter
Mind Over Milkshakes
Love the Convert
Comments
MOST POPULAR IN Israel
Our privacy policy
Aish.com Is Looking for Great Writers