The Jewish Ethicist: Perform, Then Pay 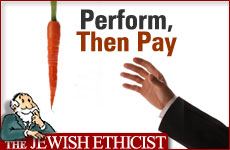 Incentives can lead to better and fairer outcomes, but they involve many ethical pitfalls.

Q. I'm thinking of giving my workers an incentive by paying them according to their output. Are there any Jewish lessons for this question?

A. Paying workers according to output can be an effective way of increasing effort and can also have positive ethical consequences, as those workers who are more productive are able to benefit personally from their contribution. But it also has many ethical pitfalls. Among them:

In this week's column and those following, we will see how some of these considerations are reflected in Talmudic discussions, and suggest how these discussions may inspire ethical compensation systems in today's work environment.

The commentators explain that the breakage was a nearly unavoidable accident. While Rabba bar bar Chanan was technically within his rights to demand damages, the judge Rav felt that this outcome was inequitable and demanded that Rabba do the right thing and pay the workers their wages. (Rav's instructions were not necessarily a formal court judgment.)

In parallel to this Talmudic case, we may say that while there is no formal legal impediment to PRP, we should take into account the ethical difficulty involved in depriving someone of their pay due to circumstances beyond their control.

The second consideration we made is breakdown of teamwork due to internal strife and competition. This problem is also mentioned in the Talmud:

At first, any [Kohen] who wanted to perform the service of removing [the burnt remains from] the altar could do so. If there were many, they would run and ascend the ramp [to the altar]. Whoever preceded his fellow by four paces, won. . . Once it happened that two were even as they ran up the ramp and one pushed the other, and he fell and broke his leg. Once the tribunal saw that this led to danger, they ruled that the selection would only be done by lottery. (2)

Again, this source does not show that there is any legal impediment to internal competition. But it does remind us that whenever we establish a competition to stimulate positive conduct – in this case, to have the candidates demonstrate their enthusiasm for performing the Temple service – it also has the potential to stimulate negative conduct – in this case, one person pushing his rival and causing harm.

Next week we will continue with some other potential ethical drawbacks to PRP.

The Jewish Ethicist - Rebate or Kickback?
Faith: the Axis Upon Which the Wheel of Science Turns
Love - Not Just About Chemicals Anymore!
Is There a Moral Code in a Virtual World?
Comments
MOST POPULAR IN Current Issues
Our privacy policy