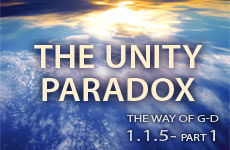 Any way we describe G-d appears to limit Him.

It is likewise necessary to know that G-d is absolutely simple, having no parts to Him. At the same time, all types of perfection are present in Him, contained in His Being, without being separate parts of it.

[We can try to understand this by observing that] the human mind has many different faculties, each with its own area of activity. Thus, for example, memory is one domain, desire another, and imagination still another, and none of these faculties impinge on the other. Memory, for example, has its own domain, as does desire, and desire does not penetrate the domain of memory, nor does memory enter that of desire. The same is true of all the mind's faculties. [The human mind can therefore be said to have structure and is not simple.]

G-d, however, does not require a separate "domain" for each of these powers. In fact, He does possess these powers which, in man, are different from one another, for G-d, we can say, does "desire" and is "wise" and "capable," and is perfect is every conceivable way.

On the other hand, G-d is actually One, these phenomena being present in Him without being separate parts of Him, their being included in Him by virtue of His perfection. All types of perfection exist in G-d, not as phenomena which are separable from His absolute One-ness, and it is impossible that G-d not possess every perfection.

The paradox we're going to explore can be summarized as follows: On one hand, G-d is an absolutely simple, indivisible oneness. On the other hand, G-d has many qualities – justice, love, power, goodness, wisdom. How can something formless have form? Why say that G-d loves and not hates? Why ascribe justice instead of sympathy? If G-d is a oneness, how can He have any traits at all?

Let's look at each side of the paradox and see how the Ramchal weaves them together.

Side A: G-d is Simple

On one hand, infinite clearly cannot have edges or borders. That's in the very definition of the word infinite. And furthermore, infinite cannot be made up of "things," properties, qualities, etc. Because if we say that infinite is composed of things – whether spiritual, physical, or metaphysical – we'd be saying that finite things, like powers or characteristics, when summed together become an infinite being. We already know that "finite" can never possibly add up to "infinite."

And with this, we realize what we mean by G-d's one-ness. When we talk about how Judaism introduced monotheism into the world, we mean a lot more than just preaching that there's one G-d and not 3 or 12. It means that the idea of G-d is a one-ness.

So what about one page? A page of a book is a compress of wood fibers that have been processed together with some forms of ink printed on them.

What about a molecule of the wood fiber? It's made up of electrons and protons, which are composed of quarks...

As we descend into the elementary building blocks of nature, every time we identify something, that thing must be made up of something else – or it wouldn't exist! So there's really no "one-ness" apparent in anything in our physical world. G-d, on the other hand, must be an absolute simple one-ness. Not as an axiom or article of faith, but inherent in the idea of what infinite is.

Side B: G-d has Qualities

As the Ramchal stated above: "All types of perfection are present in Him, contained in His Being. G-d is wise, capable..." How do we know that this must be true of G-d? Because when we look at our world, and observe everything that exists, we know that it all must come from one source – G-d. Going back to our earlier analogy, the green balloon in your mind is a pure product of your will and imagination. It exists because you exist. And even more pertinently, there's some real aspect of you in that balloon. The shape and size of your balloon won't be exactly the same as my balloon.

If we were to analyze a piece of art, we would come to know something about the artist. We might understand his mood, his politics, his psychology, his artistic talents, and even his artistic weaknesses. Because as much as the piece of art is made of paint and canvas, which is not him, the form that those tubes of paint assumed is a direct expression of the artist. In a certain sense, you can perceive the artist in his work. With G-d's creation, it's very similar and yet radically different.

And yet at the same time, there's no way we can say that creation, in shape, form or materially, can come from within G-d. Would we say that G-d made the earth round because He's circular?! Or that He made water because He's wet?! We know that there's a thing in the world called justice. Justice can't possibly come from anywhere other than G-d. The same with power. The same with love. (And by the way, the same with hate, violence, death, injustice and mosquitoes – that will be a discussion in Chapter 3).

If G-d is this simple one-ness, then in what sense can we meaningfully say that G-d is alive, or that G-d loves, or remembers, or is just? Don't these terms give G-d some sort of a conceptual form? Don't they limit G-d to being that thing and not it's opposite? If He loves, then He doesn't hate. If He's just, that's a very specific definable attribute that precludes Him from being "unjust."

This is the paradox that the Ramchal is confronting, and the resolution will give us a deeper insight into the nature of G-d infiniteness. Stay tuned.

22. Free Will
The Connection between Israel and the Jewish People
Grit and Torah
Why We Can’t See True Reality
Comments
MOST POPULAR IN The Way of G-d
Our privacy policy