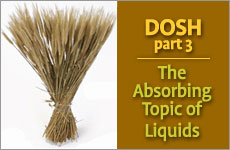 How to clean up a spill on Shabbat.

In our previous classes on the melacha of Dosh, we've talked about peeling and extracting. In this third and final lesson on Dosh, we'll discuss removing absorbed liquids and various issues related to snow and ice.

(a) Absorbed in Foods

In Dosh lesson #2, we talked about removing juices that are naturally found inside a fruit. In most instances, we aren't allowed to do this, since this is similar to removing an edible item from an inedible shell (which is the core definition of Dosh). But what if we have a food item that absorbed its liquid through cooking or pickling?1 (i.e., the liquid in question is not natural to the food, but comes from an outside source).2 Are we allowed to remove this liquid?

The majority opinion in halacha permits this, provided that you are squeezing out the liquid to get rid of it – in other words, to improve the taste of the food you're eating.3 If you want to keep the liquid for some use, then this action is not allowed.

For example, your potato pancake has too much oil, so you squeeze out the oil. Another example might be a pickle that contains too much brine.

It is worth mentioning that some contemporary writers recommend that we should act strictly and not squeeze out liquid from cooked foods.4

(b) Absorbed in Fabrics

So much for food. What about a piece of material that has absorbed liquid? Are we allowed to squeeze this liquid out?

At first glance, this seems like a strange application of Dosh. After all, the classic case of Dosh is threshing wheat to remove the inedible chaff. We've seen how this idea is extended to a variety of situations, most involving food (i.e., naturally growing items). What has all this got to do with squeezing out water (or something else) from a piece of fabric? 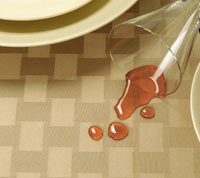 Well, if we are talking about a natural fabric (like cotton or wool), then these also grow from the ground, and taking out the water is no different than taking out juice from a fruit.5 (Note, though, that the halacha extends also to synthetic fabrics.) Some examples: a linen tablecloth on which a drink has been spilled; a sponge; a baby wipe.

But didn't we just say that where the liquid is not natural to the item, it's okay to squeeze it out?

Here, the halacha makes a distinction between liquids absorbed in foods and those absorbed in fabrics. For foods, the liquid (e.g. cooking oil) is seen as becoming part of the food, through the cooking or pickling process. However, in fabrics, the liquid retains its 'identity' as a liquid, separate from the fabric that has absorbed it. This means that separating one item from the other would be considered an act of mefarek.6 Also, the halacha points out that absorbing liquid is a natural function of fabric, and so we consider the fabric to be like a fruit, which naturally contains juice.7

So – we are not allowed to squeeze absorbed moisture out of fabric, so as to avoid sechitah. 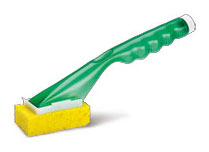 Using Sponges – A sponge becomes saturated with water from the moment it gets wet, and it is nearly impossible to use a wet sponge without squeezing out some liquid. So we do not use sponges to wash dishes on Shabbat.

What's the alternative? One method that works well is to use a plastic mesh, such is commonly used to hold a sack of potatoes. (Kosher stores often sell plastic mesh sponges.) The advantage here is that the water does not get trapped in the mesh, and therefore is not squeezed out when you wash the dishes. Another alternative is to simply wash the dishes using your hands, with or without gloves.

If we need to wipe up a spill (on the table or the floor), we may gently use a sponge that has a handle or a plastic backing. With sponges of this type, it is not inevitable that we'll squeeze out the water, so it is permitted.8

Wringing out a Cloth – this is not allowed. So, if something spills, you may use a dry rag or washcloth to wipe it up, but you can't wring out the liquid.9

Further, if the cloth (or any towel) becomes completely saturated, you could no longer touch it. Why? Because the pressure of your fingertips will inevitably squeeze out some of the liquid.10

Baby Wipes often, when diapering a baby, parents use moist disposable cloths ('baby wipes'). Because it is likely that liquid will be squeezed out when the wipe is used, some authorities say that they should not be used on Shabbat. Others permit them.11

Showering on Shabbat – Because of the concern for wringing out materials, it is customary not to take showers on Shabbat. In a case of great discomfort, one may take a cold shower, provided that the drying towel is large, and care is taken not to squeeze one's hair.12 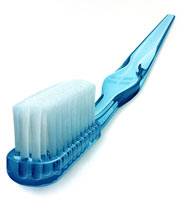 Brushing Teeth – It is also prohibited to squeeze or wring out water that is "suspended" between particles, as opposed to absorbed. For this reason, many people do not use a [synthetic] toothbrush on Shabbat, as this involves squeezing water out from between the densely packed nylon bristles.13

Our last Dosh issue deals with the uses of snow and ice. In fact, this is not really an issue of Dosh, but an area that has been included in this category by rabbinic decree. The Sages felt that there was significant similarity between Dosh activities and the crushing of snow and ice, so they enacted this restriction to avoid confusion.

The basic idea of the enactment is not to crush snow or ice, since this releases water. Such crushing is known as risuk in Hebrew.14

Because of risuk, on Shabbat we should not:

The idea here is that we will be actively extracting water from the frozen material, which is very much like sechitah.15

However, we may do activities where the melting is less obvious and/or where it is clear that we aren't interested in using the water that is released. For example, we are allowed to: 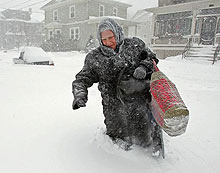 We may also walk on snow or ice (for those of us who live in such climates), since it would be almost impossible to avoid this while going about normal life on Shabbat.17

Finally, a word about spreading salt or sand on your walkway on Shabbat. This is done, of course, to melt the snow and/or to help people avoid falling. Putting out salt is fine, even though the snow will wind up melting as a result, since the melting occurs indirectly.18 There are differing opinions about sand, since the sand does not eventually dissolve. Those who do not allow it hold that putting the sand out is like 'building' an extra layer onto the ground.19

In the past three lessons, we have dealt with one of the more complex melachot we've seen so far.

Even with all of the material we've covered, we haven't completely exhausted the topic. As always, when an issue comes up, you should get advice from someone knowledgeable in this area of Jewish law.

25. Gozez: No Need to be Sheepish
The Softball Player
How This 6 Generation Bread Baker Brought Back Israel’s Ancient Grains
Olivia Newton John’s Grandfather was a Nobel-Prize Winning Jewish Physicist
Comments